Located in the northern corner of mainland Boston, Massachusetts, the North End is an urban waterfront neighborhood that stands as a microcosm of demographic transition and its historical implications. From the time it welcomed its first immigrants in the 1630s through today, the North End has encapsulated the heritages of British settlers, people in slavery, famine refugees from Ireland and religious refugees from Eastern Europe, Italian immigrants, and Boston’s wealthiest elite, though not at the same time [1]. As ethnic tensions inspired the movement of different social groups, the North End acquired a distinct, diverse heritage. This heritage manifests itself throughout the North End’s built and natural environments, as well as its historical significance in hosting stories of demographic transition for so many. This significance is evident from any visit to this publicly accessible historical site, part of a publicly open city and currently a pending Boston Landmark. 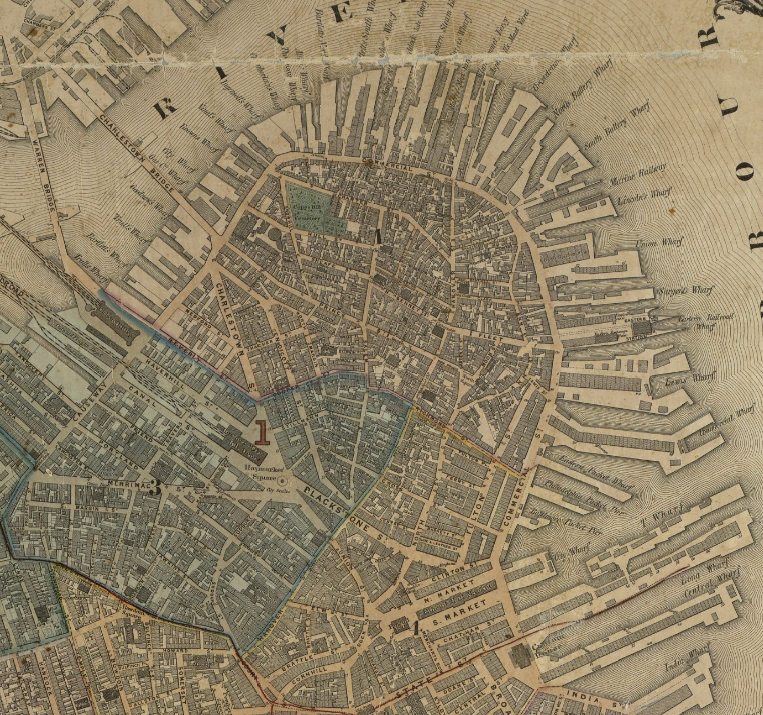 A photo taken in 2012 in one of the North End's parks, showing the area's vibrance today. Image source: WikiMedia Commons, used with permission in the public domain. Image source link: https://upload.wikimedia.org/wikipedia/commons/e/e4/North_End_Park_% 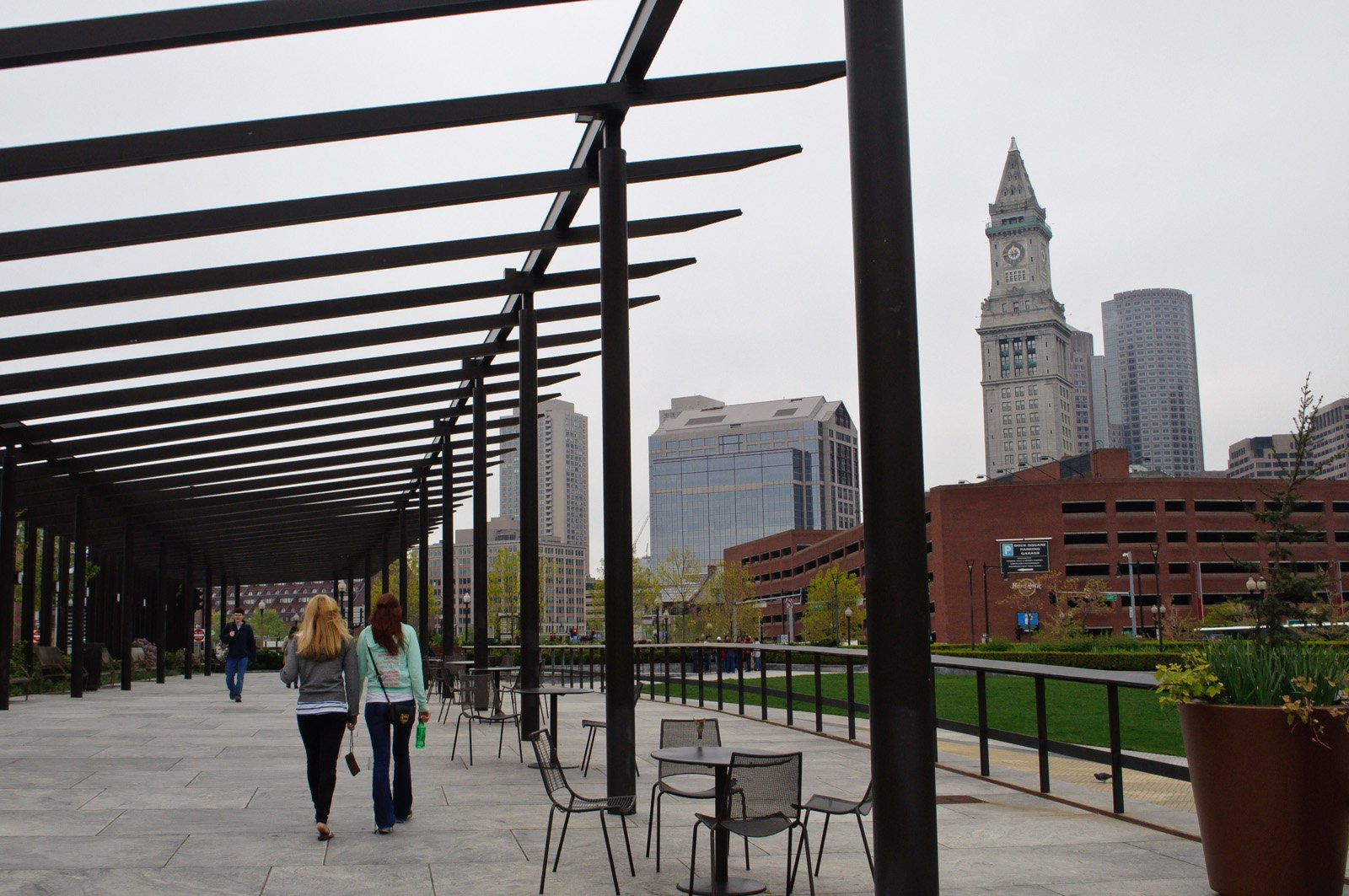 In the popular imagination, at least, Boston is populated by people with ironclad convictions, convictions that coalesce around allegiances rooted in their familial ethnic background. These allegiances are both products of and contributors to historical narratives of demographic transitions. A profusion of these heritages, from those chronicling migration forced by famine in Ireland to those recounting being taken into slavery from New Guinea, were set in Boston’s North End [1]. Certainly, then, the North End boasts tremendous historical significance far disproportionate to its .36 square mile size [2]. Indeed, the neighborhood’s small size played a role in catalyzing drastic demographic change along ethnic and socioeconomic lines [3]. By these means, the North End stands as a physical space pivotal in transmitting and reflecting the history of demographic shifts, and their implications, in Boston and beyond.

From the beginning of the North End’s heritage in hosting immigrant populations, its waterfront peninsular location established it as a landing place for settlers arriving by sea. The first of these settlers were British religious dissenters who landed in the early 1630s [3]. By the mid seventeenth century, the North End had emerged as its own fairly homogenous community, one characterized by strict enforcement of Puritanism, a conservative form of Protestant Christianity. The Puritan North End was home to rich agriculture owed to fertile waterfront soil. This leads to one of the North End’s most often silenced voices, that of the slaves who lived there under British settlers’ control. The people in slavery residing in the North End at this time were captured from New Guinea, and lived in a part of the North End named New Guinea after their place of origin [4].

These agricultural aspects of British life in the North End, in addition to its being surrounded on three sides by water, led it to become a thriving commercial center by the early 1700s. By the mid-eighteenth century, the neighborhood was considered a fashionable place of residence for Boston Brahmins, wealthy, upper-class people of British heritage. Landmarks of the American Revolutionary War, such as the home of revolutionary leader Paul Revere, are products of this period [5]. In fact, the Freedom Trail, a series of landmarks important to the history of the American Revolutionary War, passes through the North End. Indeed, it was that very war that ignited significant demographic change in the North End. After the British defeat, many residents loyal to the British government moved out of the area, relocating mainly to Britain or Canada.

By 1800, with its great vacancy in a harborfront location, the North End had become a home to many Jewish immigrants from Eastern Europe who were escaping religious persecution within their own countries [4]. These immigrants’ socioeconomic status and religious beliefs contrasted greatly with those of the Boston Brahmins occupying the North End, catalyzing economic and ethnic tension within the North End’s small space. This tension resulted in many Brahmins leaving the area for parts of Boston considered more elite, giving way to even greater vacancy in the North End. With the Irish Potato Famine in 1847 as an impetus for migration, early Irish immigrants filled that space from the late 1840s through the end of the nineteenth century. This period marked a significant socioeconomic shift of the population of the North End. In 1872, one observer remarked

“The North End was once the most important part of the town, containing not only the largest warehouses and public buildings, but the most aristocratic quarter for dwelling-houses. But this was a long time ago. A large part of the North End proper has been abandoned by all residents except the poorest and most vicious classes.” [3]

During this time, Jewish immigrants continued to arrive, and by the 1860s, large amounts of Italian immigrants began to arrive, seeking political and economic asylum from destruction in Italy. Largely, the North End retains its distinctly Italian and Irish identities today, as the Italian influx led other ethnic groups to disperse around Boston [6]. By catalyzing movement to places such as Back Bay and the suburbs, the demographic shifts in the North End played a significant role in building Boston as it is today.

By the end of the nineteenth century, the North End was an incredibly diverse place demographically, one whose human forces had been the catalyst for larger societal shifts in Boston at large. Once an elite and exclusive British neighborhood, the North End became a haven for the newest members of U.S. society, a microcosm of the challenges of living in close quarters with neighbors whose views challenge our values.