John & Isabella Hooker House. It is no longer visible from the street because of a large apartment complex. 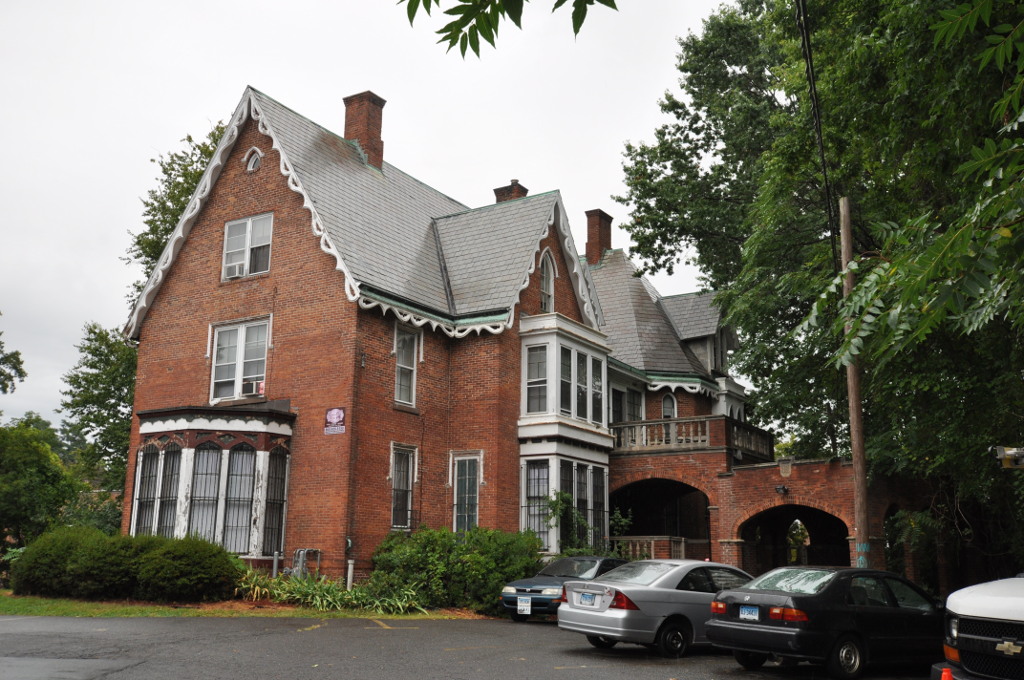 Guests play croquet on the lawn of the Hooker house 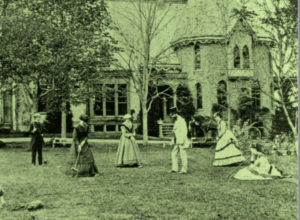 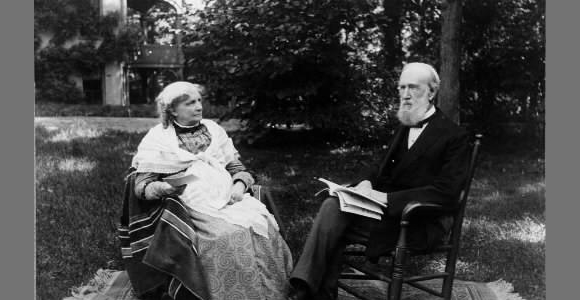 The historic house served as the home to John Hooker, a successful lawyer, an active abolitionist, and son of Hartford's founder, Thomas Hooker; and his wife Isabella Beecher-Hooker, a women's rights activist and sister to Harriet Beecher-Stowe. The couple bought the land in 1851 and then built the house in 1853. The home stood on what became "Nook Farm," a nineteenth-century literary and intellectual enclave that included the homes of Mark Twain and Harriet Beecher Stowe.

The neighborhood that became Nook Hill grew out of a slightly earlier neighborhood known as Asylum Hill because it was the site of the American Asylum for the Education and Instruction of Deaf and Dumb, which was built in 1821. The area surrounding the asylum gradually began to emerge as a residential district as downtown Hartford became increasingly crowded. As downtown Hartford was transformed by an influx of immigrants, the Asylum Hill neighborhood became an enclave of the upper middle class and very wealthy, many of whom were prominent in the business and social life of the city.

In 1851, John Hooker and Francis Gillette, who were brothers-in-law, bought a 100-acre parcel of the Asylum Hill district known as Imlay Farm. At the time, the area was largely pasture and woodland bordered by Farmington Avenue, Sigourney Street, and the Park River.  Both men built homes for themselves then sold parcels to family members and friends, who proceeded to build their own homes. Many of the early residents of Nook Farm were connected to each by family ties or friendship, and it became an unusually close-knit neighborhood of like-minded individuals.

John and Isabella Beecher Hooker built their home at the corner of Forest and Hawthorn Streets. Hooker was an attorney and his wife, daughter of famed minister Lyman Beecher and sister of Harriet Beecher Stowe, was a well-known suffragist. The Hooker home, built in 1853, is an expansive Gothic style house that would be expanded over the years by subsequent owners. Many of the later homes built in Nook Farm were influenced by the Hooker home in style and/or size.

The early connection with the Hooker and Beecher families helped establish Nook Farm as a desirable neighborhood for Hartford’s most educated and affluent families. In time, it also became known around the world as a literary and politically active community. Harriet Beecher Stowe moved to Nook Farm in 1863 and Mark Twain built an elaborate home on the same street as Stowe in 1874, where he would live for much of the rest of his life. Stories abound of the residents of Nook Farm wandering in and out of each other’s yards and homes, with trails connecting the back yards.

Many of Nook Farm’s residents were ahead of their time, with progressive ideas regarding women’s rights and abolitionism, and the community also gained a reputation for forward-thinking, open-minded people. The Spiritualist movement, which rested on the belief that the dead can communicate with the living, had a number of adherents in Nook Farm, notably Isabella Beecher Hooker and Mark Twain.

Isabella Beecher married John Hooker at the age of nineteen. She often accompanied her husband to his law firm where he read passages from William Blackstone to her. One passage in particular profoundly troubled Isabella: It stated that a married woman forfeited their legal standing once married because they were defined as one person under the law with their husband. The notion that marriage ultimately suspended a woman's legal status pushed Isabella Beecher Hooker to dedicate her life’s work to the enfranchisement and empowerment of women.

Isabella, along with her older half-sisters,  Catherine and the lauded author Harriet Beecher-Stowe became heavily involved in the cause of women’s suffrage, often crossing paths with other noted activists such as Susan B. Anthony. Isabella founded the Connecticut Woman Suffrage Association in 1869 and served as its director until 1905. She also organized and funded a suffrage convention in Washington, D.C. intended to function as a formal protest to Congress. In addition to lobbying the U.S. Congress for a woman's right to vote, she spent seven years in Connecticut fighting for a woman's right to own property; the state legislature finally passed the bill 1877.

Meanwhile, John Hooker was an active abolitionist, organizing the anti-slavery, liberty convention in 1846 and serving as the president of the Hartford's anti-slavery committee, which published a newspaper titled The Charter Oak. Moreover, he helped Reverend James W.C. Pennington obtain his freedom from slavery by paying Pennington's Maryland slave owner $150.

Nook Farm’s best days were over by the 1890s. Harriet Beecher Stowe died in 1896, and her neighbor, Mark Twain, left a few years earlier, driven away from his grand home by bad business decisions and personal tragedies. The paving of Farmington Avenue in 1899 led to the transformation of the park-like neighborhood into a more urban neighborhood, with more businesses and increased traffic.

Hartford’s population grew increasingly large in the early twentieth century, and numerous businesses and insurance companies moved their offices to the Nook Hill neighborhood. Apartment buildings were built (the Hooker home is partially obscured by an apartment block built in the 1950s), and gradually, many of the grand homes of the nineteenth century were demolished.

Some of the most historically significant homes remain, however, such as the Hooker home, the Twain house (now a museum) and the Stowe house (now the Harriet Beecher Stowe Center). All three homes—as well as numerous others in the neighborhood—are listed on the National Register of Historic Places, as is the district as a whole.

Hooker, Isabella Beecher. An Argument on United States Citizenship Before the Constitutional Convention of the State of Connecticut, Sitting in Hartford, During January, 1902. Hartford, CT, 1902.