As the French and Indian War came to an end, fighting on the frontier continued. Chief Pontiac's Rebellion began in 1762 and lasted for three years. The Native American Confederacy under the leadership of Ottawa Chief Pontiac attacked the British-held Fort Detroit and other areas controlled or inhabited by settlers of European descent. Pontiac led a coalition of Delaware, Seneca, Chippewa, Miami, Potawatomi, and Huron among other tribes in a war that demonstrated that Native American tribes still controlled vast swaths of the interior. However, Native tribes were increasingly dependent on trade with European colonists and Pontiac's Rebellion was subdued as ammunition supplies dwindled. This forced Pontiac to meet colonists in formal peace counsel that occurred near this site on July 18,1765. The treaty did not end conflict, but provided a respite from the heavy fighting that had dominated the early 1760s. 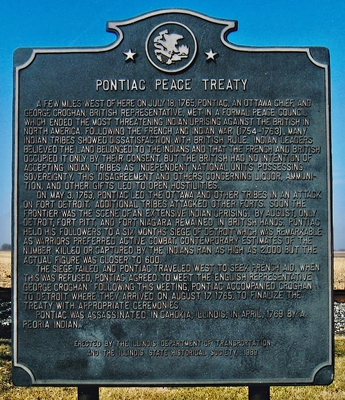 An artist's rendition of Chief Pontiac rallying other tribes to support his coalition. 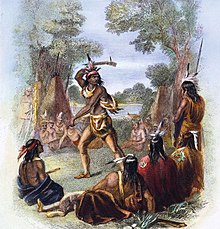 An artist's rendition of Chief Pontiac 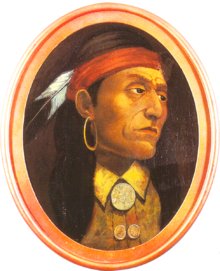 Native Americans on the frontier became increasingly dependent on European guns, ammunition, and supplies, but they also were effective in forming coalitions with other tribes and exploiting rivalries between different groups of colonists. They typically sided with the French given the greater threat represented by the rapid expansion of British colonists by the mid-19th-century. They were also more sympathetic towards the French owing to more effective diplomacy practiced by French leaders who wanted to control trade relation more than land. In addition, many French traders and soldiers married into Native tribes and some of these men were even adopted into tribes as members with mutual obligation.

As Britain decimated French positions, Pontiac saw the balance of power shifting in ways he recognized might lead to more attempts by the British to control the lands of the American interior. He held a war council attended by leaders of other Native American tribes that led to a coalition that carried out attacks on British forts. Chief Pontiac tried one of the many strategies used by the British- a ruse to gain access to Fort Detroit under the false pretense of a peace treaty. However, British Major Henry Gladwin already knew of his plans to attack under a false pretense.

Chief Pontiac with his Indian coalition attacked Fort Detroit on May 3, 1763. With the British ready for the attack, Pontiac found himself waging a six-month siege of the fort instead of a quick surprise attack. While Pontiac was attacking Fort Detroit, numerous Native allies laid siege to other British forts in the region. For example, Native warriors in Pennsylvania began a siege of Fort Pitt. Other tribes, such as the Delaware, the Shawnee, and the Seneca prepared to attack various British forts and outposts. Michigan, New York, Pennsylvania, Maryland, and Virginia were all under attack.

The rebellion revealed the superiority of Native American forces when unified. By August, eight of the eleven forts under British Control had fallen to Native Americans who were part of Pontiac's Rebellion. Major installations at Presque Isle, Sandusky and Michilimackinac had all fallen with only Fort Niagara, Fort Pitt, and Fort Detroit still in British Control. As an attempt to capture Native American villagers and use these hostages to compel Pontiac to end his attacks, a British force was sent to surprise attack Pontiac's own village. The plan was discovered and the British suffered 60 deaths at the Battle of Bloody Run on July 31, 1763.

Three months later, however, Pontiac would have to end his siege owing to dwindling supplies and the difficulty in maintaining an alliance in a prolonged conflict. Once British forces defeated the Delaware and the Shawnee, the two tribes were forced to agree to separate terms of peace. The loss of these two tribes broke Pontiac's alliance. With no support from his French allies and tribes increasingly seeking to end the prolonged conflict,  Pontiac’s Rebellion would come to an end.

During the siege of Fort Detroit, it is estimated that Pontiac’s forces killed or captured 600 people. Although some warriors displayed their displeasure for a treaty, Pontiac would eventually sign a Peace treaty with the British on August 17, 1765. Pontiac’s death came by assassination in Cahokia, Illinois, by a Peoria Indian, in April 1769. His rebellion, while unsuccesful, demonstrated the potential of a widespread Native American alliance. As a result, exploiting rivalries between tribes and their leaders became a central part of the British and American strategy in the interior.