The residential structure was constructed in 1906. It represents a primarily Dutch Colonial Revival architectural style, popular in the early twentieth century. The style is noted for it gambrel roofs and curved eaves along the length of the house. The property is known locally as the Tappan house, after its current owners. 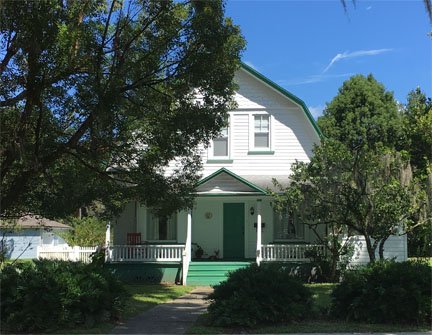 The residential structure was constructed in 1906 and is a contributing structure to the Orange City Historical District. It represents a Dutch Colonial Revival architectural style, popular in the early twentieth century. The one and a half story dwelling has the distinctive roof gambrel roof pierce by shed dormers with five-light windows and returns in the gambrel ends. Horizontal drop siding and wood shingles cover the exterior walls. There is a south facing front porch. The Ducth Colonial revival style was popular in the 1920's and 1930's. There are only a few Dutch Colonial dwellings in Orange City.

The house is known as the Tappan House after its current owners.