This Art Deco style monument honors two Lithuanian-American pilots who died during an attempt to fly from New York to Lithuania in 1933. Captain Stephen (Steponas) Darius and Lieutenant Stanley(Stasys) Girenas had begun planning their daring trans-Atlantic adventure in the 1920s after returning from World War I and witnessing Lindbergh's landing in Paris. Unfortunately, their plane, the “Lituanica” crashed in Northern Germany (now Poland), just 400 miles from their intended destination of Kaunas, Lithuania. Darius and Girenas' plane crashed it is believed due to weather conditions.

Darius and Girėnas at the naming ceremony of their plane the "Lituanica" at Chicago's Municipal Airport (Midway) May, 6th 1933 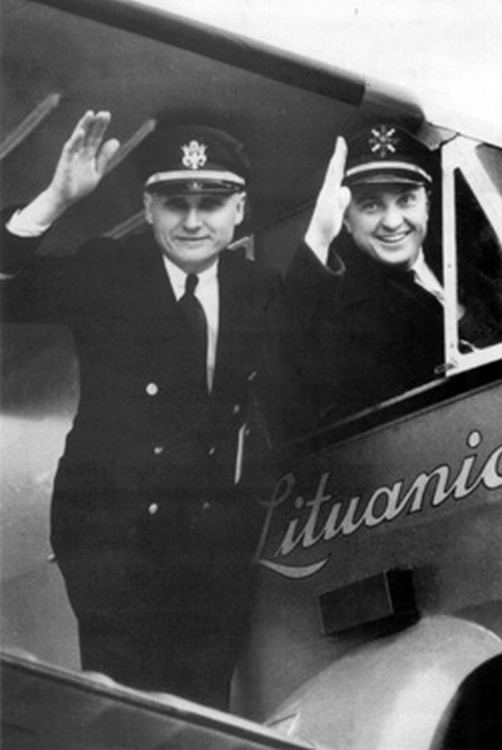 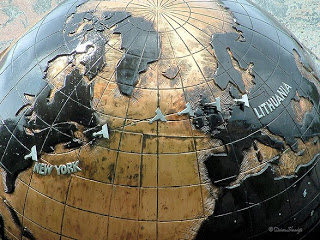 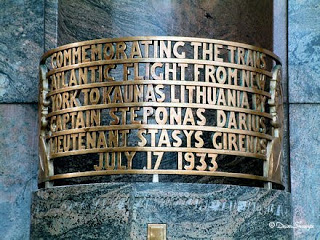 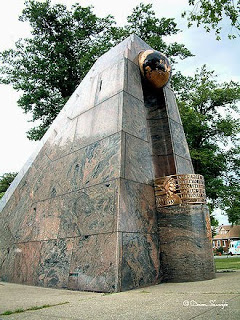 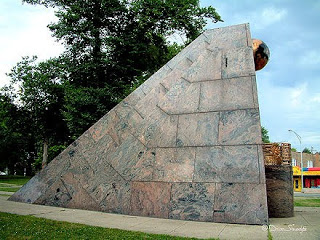 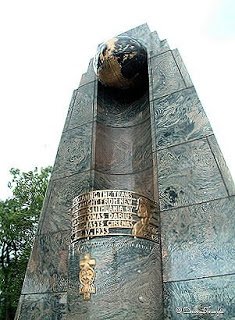 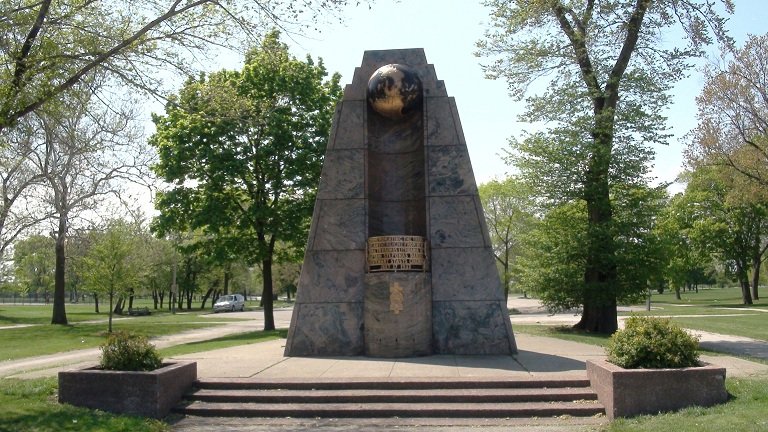 An Aviation Story:
Following Lindbergh's famed solo flight across the Atlantic Ocean in 1927, the Atlantic became an inviting challenge to daring pilots, and since that time a number of them have attempted to fly it in small aircraft. It seems that the year 1933 — before the advent of modern aircraft — was relatively rich in transatlantic flights, among which was one by the two Lithuanian pilots Steponas Darius and Stasys Girėnas. Their flight, however, ended tragically; they succeeded in crossing the Atlantic, but early in the morning on July 17, 1933, their plane, "Lituani-ca," crashed in the Soldin Forest in eastern Germany (now western Poland), several hundred miles from their destination, and both pilots were killed. As if to symbolize their determination, their bodies were flown to Kaunas, which had Been their destination, and there they were given a state funeral. It was fitting that they should be honored as national heroes, for as "The New York Times" noted in reporting their deaths, they had undertaken their flight in an effort to add Lithuania's name to the roster of aviation pioneers.

Both men were American citizens, but both had been born in Lithuania, and in the same year — 1896. In 1910, Stasys Girėnas together with his brother, left Lithuania and settled with relatives in Chicago. Here he soon showed a mechanical aptitude; he worked in a printing shop, and in his spare time he tinkered with his own motorcycle. When the United States entered the First World War, Girėnas volunteered and was assigned to a flying school in Dallas, Texas. Here he worked as an aviation mechanic for the duration of the war. By the time he was demobilized he had acquired a thirst for flying and for flying machines, and in 1924 he and a Swedish friend of his bought an airplane. He developed a love for stunt flying while he was still a student pilot; in 1925 he and his partner suffered a near-fatal accident while practicing near Chicago. Two years later he made his first solo flight, and in 1930 he received his transport pilot's license. He bought a succession of airplanes, which he used for stunt flying and for transporting passengers. As for the former, he performed various figures and quickly learned to cut his engine at an altitude of 1,CC0 feet and land in a designated area with a dead motor. He won a prize from his American League post in Chicago for this stunt. As a passenger pilot, Girėnas carried several thousand people without an accident. He also did considerable work as a flying instructor. The longest flight he made during this period was around 1,000 miles.

Steponas Darius came to the United States in December, 1907; he settled temporarily in New Jersey, and in 1909 moved to Chicago. After graduating from a technical high school he attended Lane Junior College, where he majored in engineering. He was noted as an athlete, distinguishing himself in baseball, football and basketball. In 1917 he volunteered for the army and was assigned to a field artillery battery. He went to Europe with the American Expeditionary Forces and participated actively on the Luneville, Bacarat, Esperance, Champag-ne-Marne and Meuse-Argonne fronts. Darius was wounded on the Champagne-Marne front, and he received several citations for bravery. After he was demobilized from the American army he returned to Lithuania with a group of Lithuanian-American volunteers and joined the armed forces of that country. Here he attended an officers' school and a school for aviators, and in 1923 he became a military pilot. In that same year Darius participated in the action at Klaipeda v/hsn that region passed from French into Lithuanian hands and became an autonomous area within the Lithuanian state. He was also active in sports; besides organizing sport clubs, he was one of the initiators of and for a time headed the Lithuanian Association of Physical Culture. He was also the author of several pamphlets on basketball and baseball. In 1927 he was granted a one year's leave and returned to the United States, and in 1928, at his own request, he was placed in the aviation reserve.

Darius' leave began on May 4. 1927, and he was in Paris on the 21st of that month when Lindbergh landed his "Spirit of St. Louis" there. It was probably here that Darius first conceived the idea of crossing the Atlantic from the United States to Kaunas. When he reached the United States he acquired his own plane and made many flights around the country. One of his most interesting experiences as an aviator was his work as pilot of an orchestra. This orchestra had been founded by H. MacDonald, of New York, and it traveled by air in filling its engagements. Darius was hired as one of its pilots immediately after his return to the United States. In the same year he was one of the participants in a transcontinental air race; he piloted "Miss South Bend," an entry of the South Bend, Indiana, "Tribune" and the Chicago Flying Service. The race started in New York, and Captain Darius (he had achieved the rank of captain in the Lithuanian military aviation service) reached Chicago but was forced to withdraw there because of engine failure.

Darius and Girėnas met in 1927, and almost immediately they began thinking about a nonstop flight from the United States to Kaunas. This was the period of aviation heroes and of epoch-marking flights. The Americans Lindbergh and Byrd, the Italian De Bernardi, the Germans Koehl and Huenefeld and the Frenchmen Coste and Bellonte were exploring new air routes and laying the foundations for a future worldwide air service. All the other countries, too, were developing their aviation. Lithuania acquired its first airplane for military use in 1919, as war booty from the Bolsheviks; it bought eight more planes in Germany that same year, and in 1923 it opened its first school for military pilots. But civil aviation was completely ignored. Some stimulus was necessary that would arouse public interest in air travel and lead the young country to concentrate more of its resources on the development of aviation. This had been one of Darius' chief interests while he was in Lithuania, and he often discussed the idea of flying clubs with his fellow pilots as a means of stimulating broad public participation in aviation. For while pilots of other nations were making headlines through their daring and important flights, Lithuanian pilots were contributing almost nothing.

Thus was born the idea of flying this distance of some 4,000 miles in the interests of Lithuanian aviation. Both Darius and Girėnas were highly qualified for such an undertaking by virtue of their long experience with aircraft. On July 18, 1932, the two men bought a plane — a Bellanca J-6 300 Model C H — and began preparing for the trip. Darius, who had had experience with this type of plane, was convinced that it would be adequate for the ocean crossing if certain modifications were made. New gas and oil tanks had to be added, the wings had to be lengthened and certain instruments were required; also, a new motor was necessary. The plane was entrusted to the workshops of E. M. Laird, in Chicago, for these changes. The two pilots appealed to the Lithuanian-American public for funds with which to carry out the undertaking: they made frequent tours of Lithuanian colonies in the United States during this period, giving flying exhibitions. Gire- • nas would perform stunts and Darius would take passengers for rides. Finally the plane was ready. At 6 a.m. on July 15, 1933, the "Lituanica" and iti two pilots took off from Floyd Bennett Field on the long journey eastward. Thirty-seven hours and 11 minutes later, the "Lituanica" crashed in eastern Germany, while some 25,000 people weer awaiting the plane's arrival at Kaunas Airport.

The cause of the accident was never determined. The plane had been seen wandering at a low altitude in the general area of the crash the night before. The treetops had been cut off for several hundred feet in front of the crash spot. The pilots must have been flying at a low altitude either because they were looking for a landing place or because of instrument failure. As it is, the flight remains a marvel of navigation. The plane's log shows that it remained on course during almost the whole of the trip, and this without a radio — the weight problem had forced them to make the flight without one.

Funeral services were held in Kaunas Cathedral; 60,000 people attended, and Archbishop Skvireckas officiated. A day of national mourning was declared, and President Smetona of Lithuania and other high government officials published statements lauding the heroism of the flight. It is estimated that some 300 streets in Lithuania were named for the pilots Steponas Darius and Stasys Girėnas.

In the hearts of the youth of Lithuania they will forever remain national heroes; it was the young generation to whom these two pioneers dedicated their transatlantic flight, and their testament has become a source of inspiration. The lack of selfishness, which characterized these two pilots, is exam-plary. Whereas most other pilots in those early days of transatlantic aviation were attracted by various financial or other profitable gains, the attempt of Darius and Girėnas can be considered as an idealistic mission.1


History of the Monument From Chicago Public Art Blogspot:
One of the few Art Deco style monuments located in the Chicago park system, this memorial was dedicated by the Lithuanian community to two Lithuanian-American pilots who attempted to establish a record by flying from New York to Kaunas, Lithuania in July, 1933. Captain Stephen Darius and Lieutenant Stanley Girenas served in the United States military in the fight against Germany during World War I and, upon their return, they began planning for their trans-Atlantic attempt. Unfortunately, their plane crashed in northern Germany, only 400 miles short of their destination, and both died upon impact.
The Lithuanian consul chose sculptor Raoul Josset, a French immigrant living on Chicago’s North side, to create the bronze relief portraits of the two pilots as well as the modernistic globe above that outlines their flight path. Chicago architect Charles Koncevec designed the polished granite structure that frames the globe, portraits and curved railing with the dedication in sleek lettering. At the dedication ceremony in July of 1935, 40,000 people were gathered in Marquette Park.2