First Landing State Park, formerly known as Seashore State Park, is the first planned park of the original six Virginia state parks. Situated on 2,888 acres on Cape Henry, the location was deliberately chosen to be Virginia’s first state park as it represented the state’s coastal environment and it encompassed the site of the first landing of English colonists in North America. Constructed entirely by the Civilian Conservation Corps (CCC) during the height of the Great Depression, Seashore State Park opened to the public on April 27, 1936. However, the park became a center of racial controversy during the mid-twentieth-century. During construction in 1935, many individuals in the neighboring communities greatly opposed the presence of CCC Company 323 as it consisted entirely of African American men from nearby Yorktown. Then, Seashore State Park found itself embroiled in a legal battle in 1951 after it prevented four African Americans from entering. After losing the court case, Seashore closed until 1962 when it formally reopened to all races. In 1995, the name of the park was officially changed from Seashore State Park to First Landing State Park in honor of the landing of the first permanent English settlers in North America. First Landing continues to be Virginia’s most-visited park, offering such recreation opportunities as hiking, biking, boating, fishing, crabbing, and beach camping. 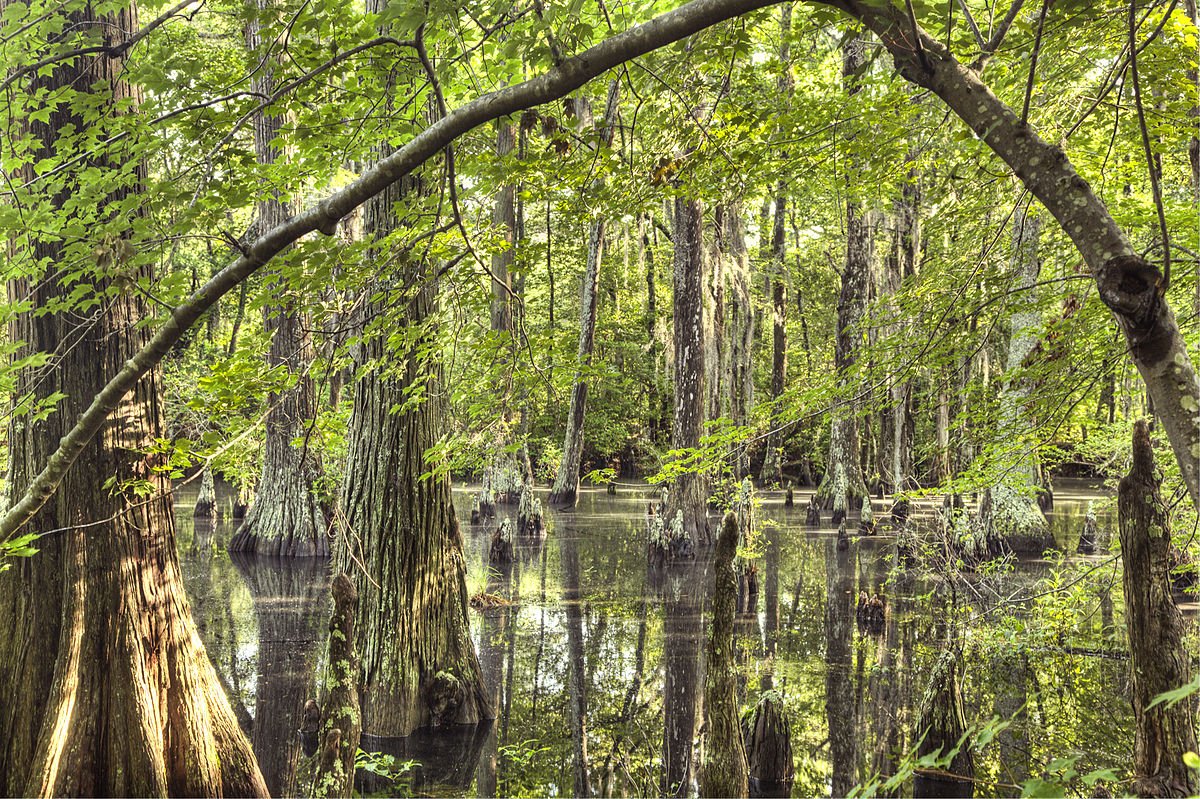 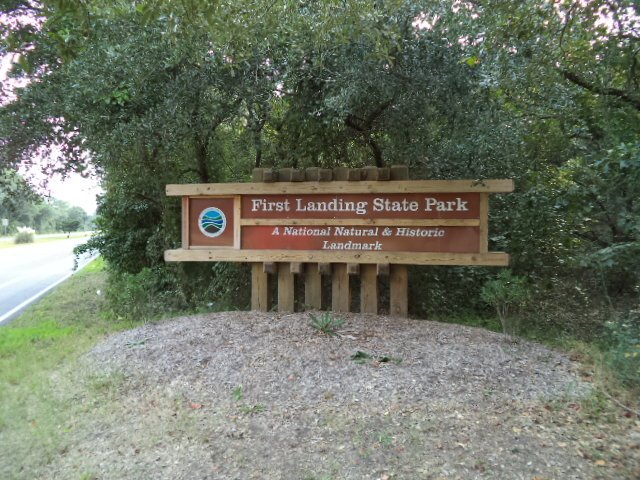 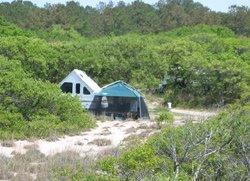 Virginia witnessed the creation of its first national park when the Shenandoah National Park opened to visitors in 1924. Shenandoah welcomed such a large amount of visitors that Virginia passed legislation for the creation of its own state park system two years later. The legislation allowed for the creation of the Virginia State Commission on Conservation and Development to oversee the development of the state park system. William E. Carson served as the commission’s first chairman. Carson proposed for the first state park to be located on Virginia’s coast to honor Virginia’s diverse geology. In 1930, the commission hired the British landscape architect Bob E. Burson to assist in the development of the Virginia State Parks system.

After conducting tedious research and many site visits over a period of two years, in 1932, Burson proposed the creation of six parks to serve as the core of the fledgling Virginia State Parks system. Each of the six parks would represent the four largest regions of the state: Seashore State Park (now known as First Landing) and Westmoreland State Park in the Tidewater region, Staunton River State Park and Fairy Stone State Park in the Piedmont region, Hungry Mother State Park in the Valley of Virginia, and Douthat State Park in the Mountain and Valley Region. With the help of Burson, the commission realized that the state park system should promote tourism in Virginia in addition to providing recreational opportunities for residents.

As part of President Franklin D. Roosevelt’s New Deal program during the Great Depression, funding and labor opportunities for public infrastructure became available to state governments. With guidance from the National Park Service, many states, including Virginia, took advantage of this opportunity and began construction on their own state parks. The first park proposed by the Virginia State Commission on Conservation and Development was Seashore State Park (now known as First Landing State Park) in Cape Henry on the Chesapeake Bay. Burson deliberately chose the area around Cape Henry for three reasons. First, the Cape Henry ecology and geology is unique to the Mid-Atlantic Region and reflects the North American continental shift from Africa. Virginia’s Cape Henry developed as a sand spit, due to sands being moved northward by oceanic currents and storms. The sand spit eventually enclosed and trapped shoal water between the mainland and ocean forming a maritime forest full of oak trees and bald cyprus swamps known as the “Desert.” The Desert provided crucial firewood and freshwater for the settlements around Cape Henry. Burson’s second reason for choosing Cape Henry is it being the site of the landing of the first permanent English colonists in North America. Led by Christopher Newport and the Virginia Company, the colonists chose not to settle on what they named Cape Henry and traveled west up the James River where they settled at Jamestown Island. The third reason for creating a state park on Cape Henry is that the Cape was already a thriving tourist destination because of the first landing history, and it made sense to tap into that tourism economy.

On August 8, 1933, the Virginia State Commission on Conservation and Development received its first land grant of 1,000 acres from the Cape Henry Syndicate, who still owned 2,383 acres on Cape Henry. After a year of negotiations, the Commission purchased the remaining acres for $260,000 on October 2, 1934. Immediately after the first donation in 1933, one CCC Corps arrived and began constructing Seashore State Park. By the end of 1934, two more CCC Corps were assigned to the park which increased the number of workers to 600 men. Between 1933-1934, the CCC Corps cleared overgrowth, cut-in roads and trails, built bridges, constructed campsites and picnic areas, and erected the Big “H” Complex as well as six cabins. The architecture at Seashore varied dramatically from the other five heavily forested state parks, as the coastal environment of Virginia Beach required different design techniques and materials suitable for a warmer, coastal climate. Instead of the typical log cabin design, Seashore’s architectural design reflected the local environment, using smaller wood framed buildings consisting of low-pitched roofs with wooden shingles.

The sheer size and scope of creating Seashore State Park required more labor than the three CCC Corps could provide, so in 1935 four more Corps arrived: Companies 1371, 1372, 1287, and 323. CCC Corps Company 323 was unique in that it consisted of African American men from nearby Yorktown. The introduction of the 323rd caused a great deal of controversy around Virginia Beach, as many local residents opposed the placement of so many African Americans in the community. However, community dissatisfaction of the 323rd did not appear to interfere with the company’s work or the progress of the park.

Seashore State Park opened on April 27, 1936 to a crowd of 6,000 visitors, and welcomed 15,923 during its first year in operation. By 1942, it became apparent that the park needed to expand in order to accommodate such a large number of visitors. That year, 727 additional acres were acquired from neighboring Fort Story. Between 1948-1950, fourteen more cabins were constructed which increased the number of cabins to 21. However, the new cabins were only used for five years as the park closed between 1955-1962, due to a class action lawsuit. In 1951, four African Americans attempted to enter Seashore State Park but got denied because of their race. The individuals subsequently filed a lawsuit on the basis that the park violated the Fourteenth Amendment. By the time the Seashore State Park case reached court in 1955, the ruling of Brown v. Board of Education, Topeka had already established racial discrimination as unconstitutional. The US District Court gave the Virginia Division of Conservation and Development the options of permitting African American visitors into the park or closing the site altogether. The Virginia Division of Conservation and Development decided on the latter and officially closed the park in 1955. However, the popularity of Seashore State Park prevented its permanent closure. In 1961, the trails reopened to the public and the campgrounds followed the next year. By 1966, 475 more campsites were added to the park.

In 1995, the name of the park officially changed from Seashore State Park to First Landing State Park in honor of the landing of the first permanent English settlers in America. First Landing State Park still remains Virginia’s most-visited park. Offering over 20 miles of trails and 1.5 miles of beachfront access on 2,888 acres of land, First Landing offers a tranquil escape from the bustle of Virginia Beach. Visitors can take advantage of the many outdoor recreation opportunities available at the park, such as swimming, hiking, guided informative hikes, biking, boating, fishing, crabbing, camping, and a junior rangers summer camp program. Other facilities found at First Landing are conference rooms, a meeting facility, a gift shop, a laundry room, bathhouses, concession stands, a hands-on environmental education center, and an amphitheater. Several of the original CCC-constructed cabins remain in-use in the park. The park continues to be enhanced as a new bridge is being built on the Osprey trail because the former was washed out by high tide. Additional enhancements include new bathrooms at the narrows, the camp store renovation, and frequent maintenance of trails. First Landing State Park was added to the Virginia Landmarks Register on June 1, 2005 and to the National Register of Historic Places on November 16, 2005.

8 am until dusk Monday- Sunday for day visitors When reserved (available from March 1 through early December), overnight areas are open 24 hours a day