James Cook was a tall, studious young man who came from a laboring family, yet he eventually became a very famous explorer and navigator during the 1700s. He successfully completed three long voyages, sailing to places like Australia, Antarctica, and North America, and he discovered many new island chains. His statue showcases his brave attitude toward exploration and navigation. Without Captain Cook, many lands of the Pacific Ocean and beyond may not have been discovered as early as they were.

This is the front of Captain James Cook's statue located in Anchorage, Alaska. He stands tall and looks onto the sea, as he did on his ships. The visitors of the statue must look up to the famous man, which shows signs of intelligence and confidence. 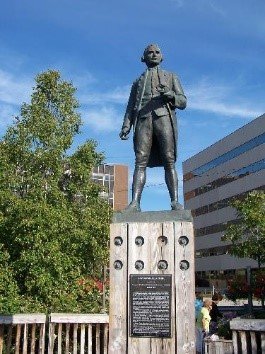 Captain James Cook was a tall and studious man who became very famous through his expeditions. He sailed to unexplored lands in the Pacific Ocean, northern Pacific and toward Alaska, and southern Pacific toward Australia. 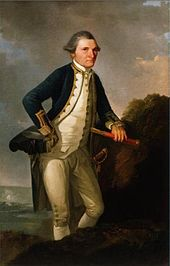 This is the routes of his voyages. The red line represents his first voyage, the green line is his second voyage, and the blue line is his third and final voyage. This map reveals how intelligent Captain Cook was as an explorer and navigator. 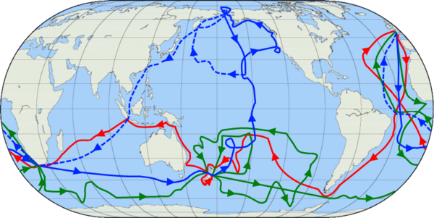 James Cook, who worked his way up to Captain Cook, was a very hard-working man. Apprentice, navigator, and adventurer were just a few of the jobs he obtained over the years. He went on three important voyages during his lifetime, and was the first Englishman to explore many distant lands.

Born in Yorkshire, England on October 27, 1728, James Cook was bound to farm his entire life until he decided to join the Royal Navy during the 1750s. First, he was an apprentice on coal-carrying ships, and eventually he worked his way up to “King’s Surveyor”. During his time as the King’s Surveyor, he was given command of the ships that explored Newfoundland, his first of three voyages.

Captain Cook’s first expedition, named the Endeavour, was to New Zealand, Australia, and islands in the Pacific Ocean, including Hawaii. He successfully completed this expedition between 1768 and 1771, and was honored by his grateful nation following his return. Also, he was made a fellow of the Royal Society and was officially received by the King due to his efforts. With that credibility, Cook set off yet again one year later, but this time to Antarctica. During this adventure, he discovered several island chains and revealed that the assumed southern land, also known as Terra Australis Incognita, did not exist. Before this voyage, he was only a Master, but he was honorably named Captain during this trip, a title which he carried into his final voyage in 1776. This time, he ventured to North America and Alaska, but his original plans were not successful. He thought he could find a route to the Atlantic Ocean, also known as the fabled Northwest Passage from North America to Europe to the Orient, but instead sailed south through the islands of Hawaii.

Captain James Cook was killed by Hawaiian natives in 1779, amidst his last voyage. He is now known for being one of the greatest explorers and navigators in the world. Additionally, he fed his crew a healthy diet which prevented them from getting a deadly disease called scurvy, a reason all three of his voyages were successful. His statue, which faces the sea in Anchorage, Alaska, was created by Derek Freeborn. The statue was gifted by the British Petroleum Company in 1976 in celebration of the United States, following the statue in Whitby, England, where Cook began he sea career.

This statue is always open.