The Lincoln Memorial was dedicated in Waterfront Park in 2009, the bicentennial of Abraham Lincoln’s birth. The dedication was part of a larger ceremony that also featured live music, readings, and a dramatic performance. Funds for the memorial site came from the State of Kentucky, the Harry S. Frazier, Jr. family, and the Kentucky Historical Society. The statue was sculpted by Louisville native Ed Hamilton, who was also the artist behind the “Spirit of Freedom” memorial in Washington D.C. that honors African American troops of the Civil War. The surrounding landscape was designed by Hargreaves Associates, who included some of Lincoln’s favorite trees around the site. The memorial also consists of four bas reliefs carved into the walkway that represent four important moments in Lincoln’s life: his childhood in Kentucky, his success in politics, the Civil War, and his opposition to slavery.

The Abraham Lincoln statue in Waterfront Park, Louisville, Kentucky. Artist Ed Hamilton said, "I didn't want to do another Lincoln like all the other Lincolns...I wanted [it] to be a Lincoln of the people.” 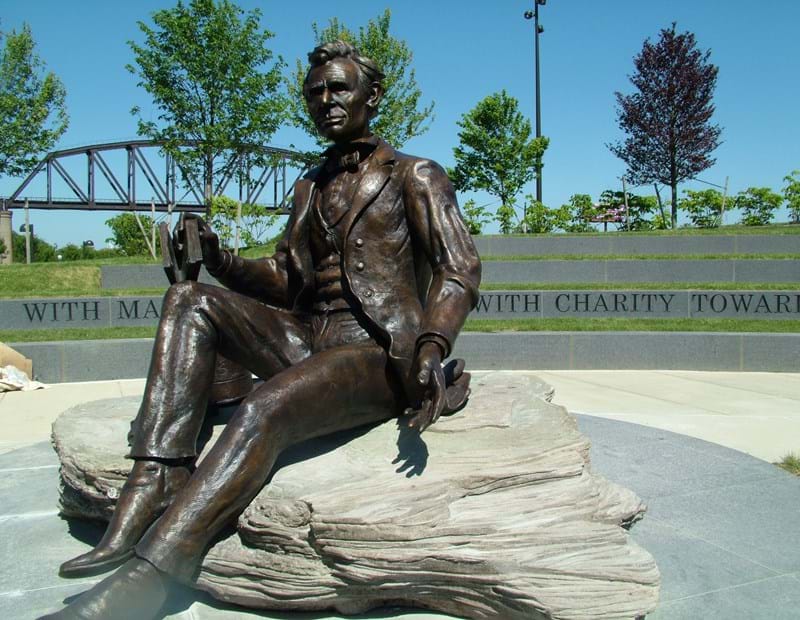 Abraham Lincoln was born near Hodgenville, Kentucky on February 12, 1809. Growing up, Lincoln learned about hard work from his second-generation-pioneer parents and developed a love of reading. Even after his father moved their family to Indiana in 1816, Lincoln thought of himself as a Kentuckian. In 1830, Lincoln and his family left Indiana for Illinois, where he became interested in local politics. He was elected to the state legislature just four years later.

After passing the bar exam in 1836, Lincoln worked as a lawyer. In the 1840s, he married Mary Todd, also a Kentuckian, and was elected to the House of Representatives. It was in the following decade that Lincoln spoke out against slavery in front of large crowds, including his famous “a house divided” speech. Though he ended up losing a Senate election to Stephan Douglas, Lincoln had earned himself a national reputation.

In 1860, Lincoln defeated Douglas and became the United States’ sixteenth president. By the time he was inaugurated in 1861, seven states had already left the Union and formed the Confederate States of America. Lincoln then led the country through America’s bloodiest war. He signed the Emancipation Proclamation in 1863, which freed slaves in the rebel states but not in those that had remained loyal to the Union. He also argued for the Thirteenth Amendment, which would end legal slavery in the U.S. once and for all. However, Lincoln was assassinated shortly after being inaugurated for his second term in 1865 and did not get to see the ratification of the amendment.