The Saint Albans Museum is located in historic downtown Saint Albans, Vermont. It has various exhibits showcasing historic sites in Vermont, including one dedicated to The Saint Albans Raid. The Saint Albans raid was the northernmost land battle during the American Civil War. 21 men of the 8th Kentucky Cavalry were ordered by the Confederate Secret Service to conduct a raid on the town of Saint Albans, VT. Robbing three banks simultaneously, the men then escaped to Canada. They were then arrested, and $88,000 of the $208,000 stolen was returned to the city of Saint Albans. Due to being a neutral country, Canada could not return the men to the United States, as they were acting on official military orders.

5 of the 21 raiders while in Montreal. 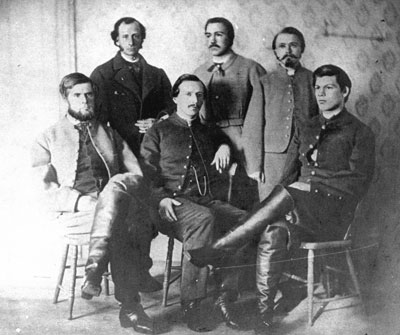 Captain George Conger, who chased the raiders almost into Canada. 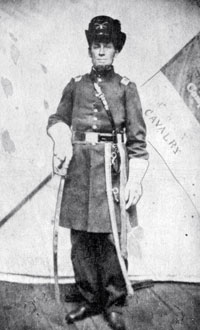 The Saint Albans museum is a large collection of historic items pertaining to Saint Albans and Vermont history. It was opened in 1971 by the Saint Albans Historical Society. There are eight major displays. The "Railroad Room" consists of Vermont railroading memorabilia and history, particularly of the "Central Vermont Railroad." It was the largest railway in New England, and was founded by natives of Saint Albans. The "Military Room" features items from the revolutionary period to Desert Storm, and dedicated to the "citizen soldier." “Farming Franklin County,” which is the newest exhibit, opened in June of 2018. Its focused on the history of farming in Franklin County. The "Smith Family Room" whom were philanthropists in Saint Albans, along with governors, and soldiers proudly serving Vermont. The Medical Room, which has artifacts from hospitals throughout the ages.The Sterling Weed display, which is a collection of artifacts from the Sterling Weed Orchestra, which was a renowned New England jazz band active from the 1930's to 2005. A historic classroom, from the museum building which operated as a school from 1861 to 1960s. Lastly, the "Women's Realm," is dedicated to powerful women of Saint Albans from the 1800s to the present.

On October 19th, 1864, 21 men of the 8th Kentucky Cavalry, lead by Captain Bennett H. Young, robbed three Saint Albans banks simultaneously. Their original plan was to rob the banks, then torch the town, however their bottles of Greek fire failed, and only one small building was burned. The men got away with a total of $208,000, equivalent to over $3,000,000 in today’s money. This cash would prove valuable to the Confederacy, and help alleviate some of its debt. The men quickly fled the town, crossing into Canada, where they were arrested. The Canadian authorities found $88,000 of the money, which was promptly returned to Vermont, and a lengthy court case began to decide what was to be done with the soldiers. The courts ruled that the attack “Must be regarded as a hostile expedition undertaken and carried out under the authority of the so-called Confederate States under the command of one of their officers.” And thus couldn’t be dealt with under normal law. Montreal Superior Court Judge James Smith ruled that the prisoners could not be extradited and were entitled to be set free. Upon release however, they were rearrested and sent to Toronto to be tried for violating neutrality laws. The court case dragged on, with no decision being made before the fall of the Confederacy, and the surrender of General Robert E. Lee at Appomattox Courthouse. Upon the closing of the war, the raiders were set free and allowed to return home, dissipating into the scaffolds of history. While thought to be ordered by the Confederate Secret Service, its also a possibility that these were men acting on their own accord, knowing they could get away with the robbery in the bleak, final months of the war.

. The St. Albans Raid. Investigation by the Police Committee of the City Council of Montreal, into the Charges preferred by Councillor B. Devlin, Against Guillaume Lamothe, Esq., Chief of Police; and the Proceedings of the Council in Reference Thereto. Montreal. Owler & Stevenson , 1864.