The oldest continuously operating mill in the United States, the Old Schwamb Mill was constructed in 1861 on the foundation of a 1684 grist and sawmill. It was a spice mill at the time it was rebuilt, but in 1864 was purchased by the German immigrant Schwamb family, who converted it for use as a water-powered woodworking shop for the production of oval and circular portrait and mirror frames. Today, it continues to operate as a working mill and museum owned by the nonprofit Old Schwamb Mill Preservation Trust. The museum also offers a number of classes in arts and crafts through its tenant organization, Shaker Workshops. 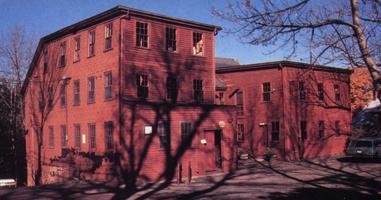 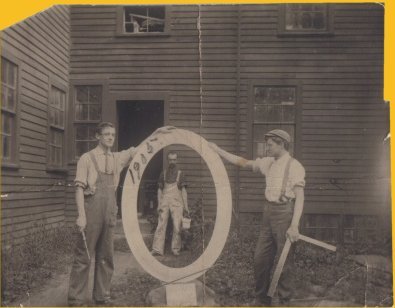 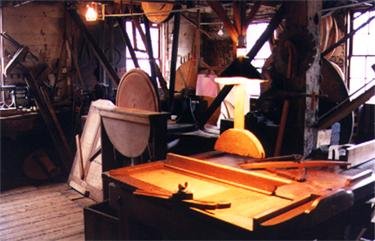 Brief History of the Site

The present building on the site was constructed in 1864, but the foundation is much older, dating to 1684. In the seventeenth century, the property was referred to as Foot of the Rocks, and the mill was the third such structure built along Mill Brook in Arlington (then called Menotomy). Built by David Winship, the grist and sawmill passed on to his son Edward, then his grandson Joseph, and down many more generations of the family. The mill lay about 200 yards from the 1775 route of the British and of Paul Revere on their way to Lexington and Concord. Eventually, the Winship mill was purchased by Henry Woodbridge, a spice grinder. After a severe fire in 1860, the Woodbridge Spice Mill was rebuilt on the original foundation the following year. In 1864, the mill was purchased by Charles and Frederick Schwamb, two of seven German brothers, all but one of whom had emigrated to America (2; 3).

The first of the Schwamb brothers to come the United States was Jacob, in 1838. He settled in Boston and began a business constructing piano cases. Joined over the next two decades by his brothers Charles, Peter, Theodore, and Frederick, the brothers expanded their piano case business. Peter Schwamb died in 1858, and his wife married his brother Theodore; together they raised Peter, Jr., later a professor and director of the M.I.T. Mechanical Laboratory. Another brother, Ludwig, was forced to return to Germany due to illness (typhus and lead poisoning), and moved to Indiana on his return to become either a farmer or a Lutheran pastor. Theodore founded a mill for the piano casing manufacturing business in 1862, two years before his brothers converted the Woodbridge Spice Mill for woodworking. Their specialty was making oval frames for portraits, which remains the mill's primary product today. Though Frederick left the business to go into lumber in Chicago, Charles Schwamb and his descendants continued at the Schwamb Mill for over 100 years, until 1969 (3).

At the end of the Civil War, with the rise of photography, oval frames gained popularity, and the Schwamb Mill became the nation's top producer of "hand-turned oval and circular portrait and mirror frames," (3). In 1869, a three-story wing was built to house a moulding machine and finishing rooms, and a steam engine was installed in the barn cellar, and in 1883 a two-story ell provided office space and a shipping room. A water turbine supplemented the steam power later in the decade (3). The Schwambs developed a specialized prong saw for joining the pieces of frames together, and used a drying kiln for the wood (today the only surviving dry kiln in New England). They used mainly native walnut, but for finer frames used cherry, birch, maple, and mahogany with gold liners or fully gilded frames of North American basswood (1; 2). The finishing for the frames, including lacquering, polishing, gilding, and inlay was all done by hand, with about 50 to 75 employees working long hours each day (2; 3).

Charles Schwamb's son Carl William joined the business in the late 1860s, and Carl's sons Clinton and Louis Schwamb took over in 1905. They renamed the business the Clinton W. Schwamb Company, and by 1922 had 200 employees (3). The mill switched from steam power to electricity in the 1950s (2). In 1928, the other Schwamb Mill, established by Theodore, passed on to a nephew, who switched the business from piano casing manufacture to architectural woodwork, later adding an ecclesiastical department and, during World War II, exclusively produced cabinetry for military bases and ships. The Theodore Schwamb Mill closed in 1971 and was purchased for an automobile dealership and small business rental by immigrant John P. Mirak. At the Clinton Schwamb Mill, meanwhile, in 1969, Louis and Clinton Schwamb died, and Clinton's son Elmer decided to retire. Initially, he planned to sell the property to a lumber trucking company. The company intended to destroy all three buildings on the site, but a group of citizens formed the Schwamb Mill Preservation Trust to save the mill and continue production. According to the official website, this was "the first case of grassroots historic industrial preservation in America," (3).

Today, the Schwamb Mill is the oldest continuously operating mill site in the United States, continuing to produce hand-turned frames, as well as serving as a museum. It holds the original millstone from the 17th century gristmill, original furniture from Charles Schwamb's office, the woodworking shop, and displays of original tools and machinery used in the 19th century, as well as Shaker Workshops, a tenant of the main building offering classes in design, calligraphy, manuscript illumination, life drawing, painting, jewelry making, stained glass, pottery, hand-tooled and miniature woodworking, and historic house research (1; 3).

Since the foundation took over the site, the Old Schwamb Mill has produced frames from the last timbers of the Washington Elm, with prints commemorating George Washington taking command of the Continental Army; created an oak jewel chest from the timbers of the USS Constitution for the U.S. Navy to present to Queen Elizabeth II; and produced oval display cases for the Iolani Palace throne room in Hawaii. Schwamb frames and trim are found in the White House, the Vatican, Buckingham Palace, the Queen of Sweden's collections, the Palace of the Kings of Hawaii, and in every major art museum in America (3). In the Schwambs' time, their frames also decorated farmhouses and even sod huts on the frontier (1).