Constructed between 1925 and 1927, the first dam at American Falls required three-quarters of the homes and businesses at the original location of the town of American Falls near a waterfall on the Snake River to be moved to their current locations. The current dam replaced that dam in the 1970s. The daming of the Snake River allowed for year-round irrigation and power plants but the project required the moving of an entire community. Parts of the original community can be seen when the reservoir created by the dam reached low levels .

The current dam was built in the 1970s and replaced the dam that created the reservoir. 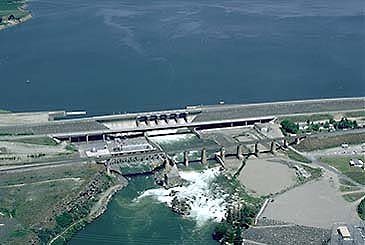 Established in the late 1800s, American Falls was moved to make way for a dam. 344 residents, 46 businesses, three hotels, one school, five churches, one hospital, six grain elevators, and one flour mill were moved from the original townsite.

Oneida Milling and Elevator Company’s grain elevator was the largest permanent structure remaining in place. While part of the old grain elevator can still be seen, most of the former town is covered by the American Falls Reservoir. A portion of this area can be seen in late summer months as the reservoir empties. The original buildings that were moved, including the homes, can still be found in American Falls.