The IBM Building, now known as 330 North Wabash, was erected in Chicago in 1972. The building was the last skyscraper designed by the distinguished Second School architect Ludwig Mies van der Rohe, who died before its completion. The building serves as a monument to the dominance of IBM within the late twentieth-century business world. IBM, at the time of the building's design, employed more than 240,000 people and generated more than $6.8 billion in revenue. The building is now home to the headquarters of the American Medical Association and the Langham Hotel. 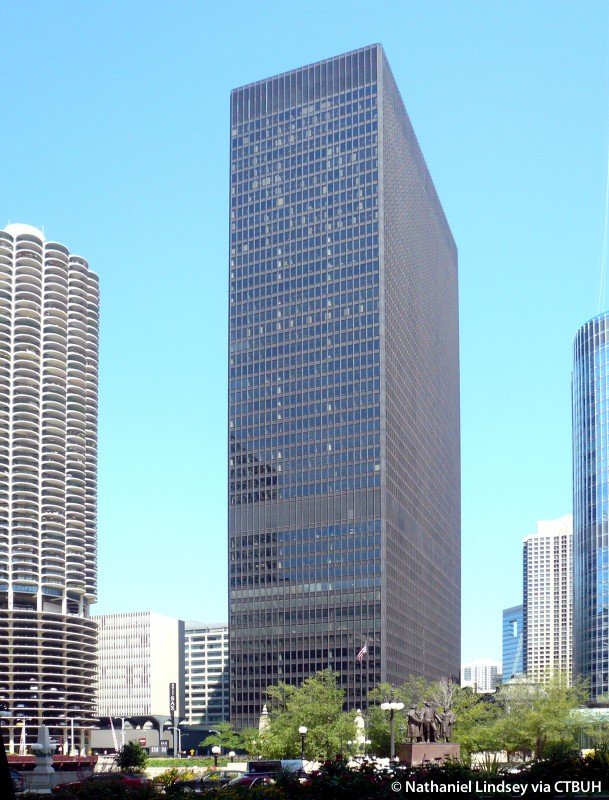 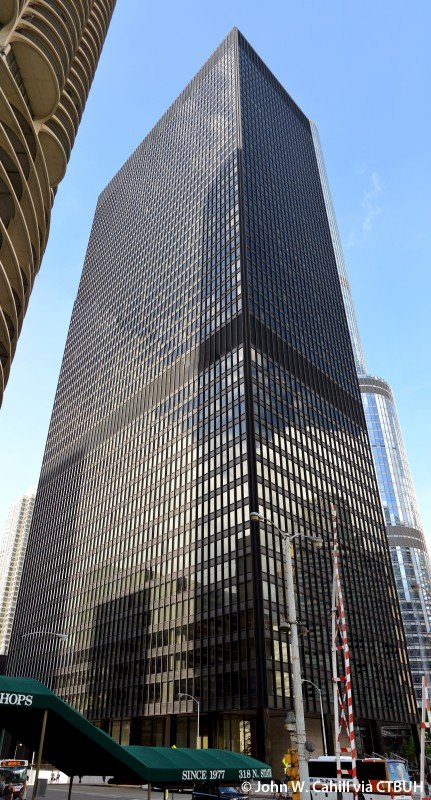 The former International Business Machines Corporation (IBM) Building, now known as 330 North Wabash Avenue, was completed in 1972 by noted Chicago architect, Ludwig Mies van der Rohe. It was his final design and included numerous engineering innovations to support its height, and at the time of its completion, this was the third-tallest building in Chicago.

Buildings constructed earlier in the century dominated the Chicago skyline until the late 1950s, when resumption of commercial building signaled the arrival of what became known as the "Second Chicago School" or Second School architecture. The Second School's most influential figure was Ludwig Mies van der Rohe, a native of Germany who served as one of the major pioneers in the development of modernism in Europe.

Ludwig Mies van der Rohe immigrated to the United States and arrived in Chicago in 1937. He assumed the headship of the School of Architecture at Chicago's Armour Institute of Technology (later Illinois Institute of Technology. Several of his influential European contemporaries such as Walter Gropius and Marcel Breuer also came to the United States during the 1930s. Together, these architects sought to challenge current building design just as the original Chicago School architects had done. Together, these architects created designs based on 20th century modernism.
IBM traces its roots back to the 1880s when it produced such business machines as recording clocks and tabulating machines. The company hired Mies van der Rohe in 1966 to build the company's regional headquarters. By the late 1960s, the IBM Corporation had grown into an international giant with offices and plants in the United States, Europe, and Asia, employing more than 240,000 people and generating more than $6.8 billion by 1968.
At the time of the commission, Mies was eighty years old and had a resume that included seven decades of skyscraper and building construction throughout the world. The building is an outstanding example Mies' work, with trademark features shared by other Modern Movement architects. The 670-foot-tall IBM building enjoys a geometric, rectilinear box design, noted for its lightness that's expressed by the expansive glass and anodized-bronze tinted aluminum curtain walls.  The windows of the curtain wall are taller than they are wide, expressing verticality and encouraging the onlooker's eye to move skyward. The I-beams also extend from the windows and reinforce the verticality of the building, typical of Mies' designs.
Upon completion in 1972, the building ranked as the city's third tallest building, which required innovative engineering. For instance, The engineers had to account for the force of wind against the exterior, which creates an air pressure imbalance between the inside of the building and the outside, which can result in water getting sucked through tiny holes in the office walls. Mies' team devised small shielded ports in the wall that balanced the pressure and prevented any water seepage. The building's electrical system and floor strength, along with the room heights, were all designed with IBM computer systems in mind. The building also included state of the art air conditioning, controlled by computer systems designed by IBM and tied to a weather station located on the roof and able to account for heating differences attached to which side of the building was experiencing the highest sun exposure.
Though Mies' designed the building, which was approved and finalized in July 1969, he died before construction started. Thus, it is his last design. An honorary bust of Mies sculpted by Italian expressionist, Marino Marini (1901-1980), was unveiled in the building lobby when the building officially opened for business.
IBM moved out of the building in the 1990s as modern-world computer systems, personal computers, and inter-networking systems ( (Internet) supplanted IBM's dominance. As such, the building is as much a monument to its architect as it is the twentieth-century business climate noted for its mainframe computers (notably after WWII), large office buildings and central, downtown locations.