Chillicothe’s Quinn Chapel African Methodist Episcopal Church is the oldest A.M.E. church in Ohio and the oldest west of the Allegheny Mountains. Before it was established, African American Methodists in the area attended church with white congregants. After years of discrimination in this church, the African American members left in 1821. Quinn Chapel was organized later that year, though it did not go by that name until 1857 when it moved to its present location. The current church building was completed in 1910. 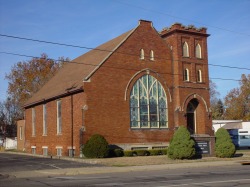 During the late 1790s and early 1800s, Methodists in Chillicothe met in private homes. When a church was established on Second Street, Black and white Methodists worshipped there together. The African-American members still faced discrimination, however. They had to sit in the balcony, separate from the white congregants, and had to wait until after all the white members had taken communion before they could do so. In 1821, the African-American congregants left and organized an independent church under the leadership of Richard Allen. For years, they were known as Allenites.

On May 30, 1821, Quinn Chapel was organized by Reverend William Paul Quinn at the home of Reverend Peter James. In 1823, the church became a part of the African Methodist Episcopal Church. The congregation bought its present lot from Isaac Turner in 1857 and built a brick church there. This was the same year the church adopted the name Quinn Chapel. The present-day church was dedicated on December 10, 1910 and has undergone minor improvements over the years.

The Quinn Chapel African Methodist Episcopal Church was also a stop on the Underground Railroad. Many of its congregants worked to help enslaved African Americans escape to freedom further North or in Canada. One of these brave members was Thomas Woodson, who had previously been a slave to Thomas Jefferson.