The Natchez Trace, stretching from Natchez, Mississippi to Nashville, Tennessee, was an important trail in the War of 1812. Jackson's first trip on the Trace in 1813 with his troops was miserable, especially coming back to Tennessee. Jackson got his nickname "Old Hickory" as a result of this trip. Jackson and his troops used this trail again on the way from the Battle of New Orleans in 1815. 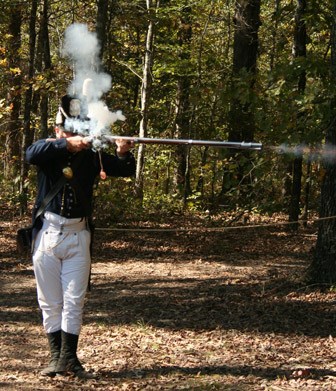 General Andrew Jackson used the Natchez Trace to move troops in 1813 to Washington, Mississippi, where his troops saw no action. But they endured an ordeal just to get back to Tennessee. They had to move in knee-deep mud, with their oxen dying, and having to deal with an occasional rattlesnake and extremely heavy rain and hail, according to soldier A.J. Edmundson. Jackson won the nickname "Old Hickory" as a result of the trip.
Jackson would move his troops again on the Natchez Trace from mid-1813 to mid-1814, to fight the Creek Native American Tribe in Alabama. After that, in 1815, Jackson took his troops yet again on the Natchez Trace down to New Orleans to take on the British in the Battle of New Orleans. The trip back to Tennessee was a far more joyous one than the one in 1813, as they were victorious in New Orleans.
In 2012, the area near Columbia, Tennessee, celebrated the 200th Anniversary of Jackson's trip down the Natchez Trace with his volunteer army on their way to the Battle of New Orleans.