The Majestic Theatre claims that it is “America's oldest continuously operating [movie] theater.” The theater opened in 1853 as the Masonic Hall and began showing motion pictures with the Edison Vitascope in 1896. Since then, the theater has exhibited films and live performances ranging from operas to vaudeville acts. Today, the Majestic operates as a non-profit and hosts community events, live performances, and movie nights.

Inside the Majestic Theatre 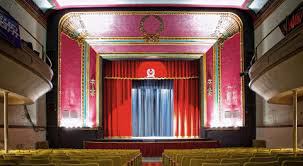 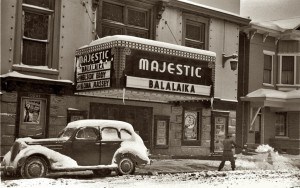 The Majestic Theatre started out as the Masonic Hall, built in 1853. After the building was enlarged in 1876, it became known as the Masonic Opera House and was considered one of the finest theaters in Ohio. The theater featured a variety of live performances, from dramatic plays to comedic vaudeville acts. In 1895, the opera house was equipped with electric lights, making it one of the first buildings in Chillicothe with electricity. In fact, the building even sold electricity from its generator to parts of the city. One year later, the theater began showing motion pictures with the Edison Vitascope, making it the first movie theater in town.

In 1904, a man named A.R. Wolf bought the Masonic Opera House and remodeled it. He enlarged the stage and added permanent seats and stained-glass windows. In 1907, Wolf constructed an arch across Second Street to add to the grandeur. It still stands today. Wolf sold the theater to the Myers brothers in 1915. They were the owners who changed the theater’s name to the Majestic and who chose the exhibition of movies over live performances. Still, there was the occasional vaudeville performance over the years. Of the top one-hundred performers of the time, the Majestic hosted at least eighty-eight.

The brothers also added the words “vaudeville” and “Majestic” in neon lights to the arch in 1918 (vaudeville was later removed). That same year, Chillicothe was dealing with the Spanish influenza pandemic. Hundreds of soldiers died at the nearby Camp Sherman, and their bodies were brought to the Lowery Mortuary across the street from the Majestic. When the mortuary became overcrowded, bodies were stored in the dressing rooms of the theater and embalmed on stage. Because the bodily fluids from this process were tossed into the alley by the theater, it is still known today as “Blood Alley.”

The Majestic Theatre was restored in the 1970s after being purchased by Harley and Evelyn Bennet. New seats and doors were installed while the restrooms and lobby were updated. The roof and marquee were also refurbished. In 1990, three local businessmen, Robert Althoff, Robert Evans, and David Uhrig, bought the theatre as a non-profit organization. Today, the Majestic Theatre hosts live performances, community events, and classic movie nights. Visitors can also request a tour of the historic theater.