The Taylor-Butler House, built in 1853, is one of the five houses currently owned by the Monmouth County Historical Association. Out of the five houses, this is the only house known for its historical ties with the Civil War era.

The Taylor-Butler House was constructed 1853 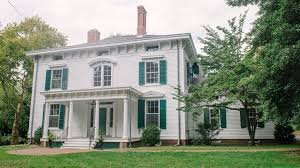 In 1853, Joseph Dorset Taylor and Mary Holmes Taylor built this structure to serve as their new home on the same property as the family farm they inherited. When the last Mary Taylor passed away in 1930, the Taylor-Butler House stood empty for around ten years. In 1941, the Kramer family purchased the Taylor-Butler House and made some modifications of their own, including the addition of electricity and modern plumbing. George and Alice Butler were the last of the private owners to purchase the home in 1954. The Butlers were known for their involvement around the town, along with their contributions to the home. The Monmouth County Historical Association purchased the house and five acres from the Butlers in 1999. The MCHA wanted to preserve the house for its fascinating history and appearance.

The House was originally known as the Orchard Home because of the Italian decor. Joseph Taylor was a successful merchant and an importer of goods from China. Taylor's wealth can be seen in the decor (walls) of the home. A downturn in their business later forced Joseph and Mary Taylor to sell all the items in the home due to economic hardship.

At present, the house is mostly utilized as an event venue. The house is open the fourth weekend of every month to the public for tours and last about 45 minutes to an hour and include paintings from by local artists that are displayed within the historic home.

Open for tours on the 4th Friday, Saturday, and Sunday of the month from May through the last week in September from 1:00pm to 4:00pm