This historical marker denotes the location of the Hungerford Tavern. In addition to being an important place where business was discussed, this tavern was the site of a meeting of Maryland landowners who drafted the 1774 document known as the Hungerford Resolves. At a time when most of the colonists thought in terms of their community and colony, this document referred to a common American cause. The document also called on fellow colonists to sever all economic ties with Great Britain.

Postcard depicting the Tavern from around 1910. The caption goes on to list the amount of famous revolutionary figures who have stayed there. 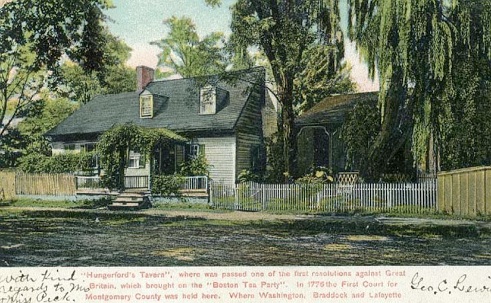 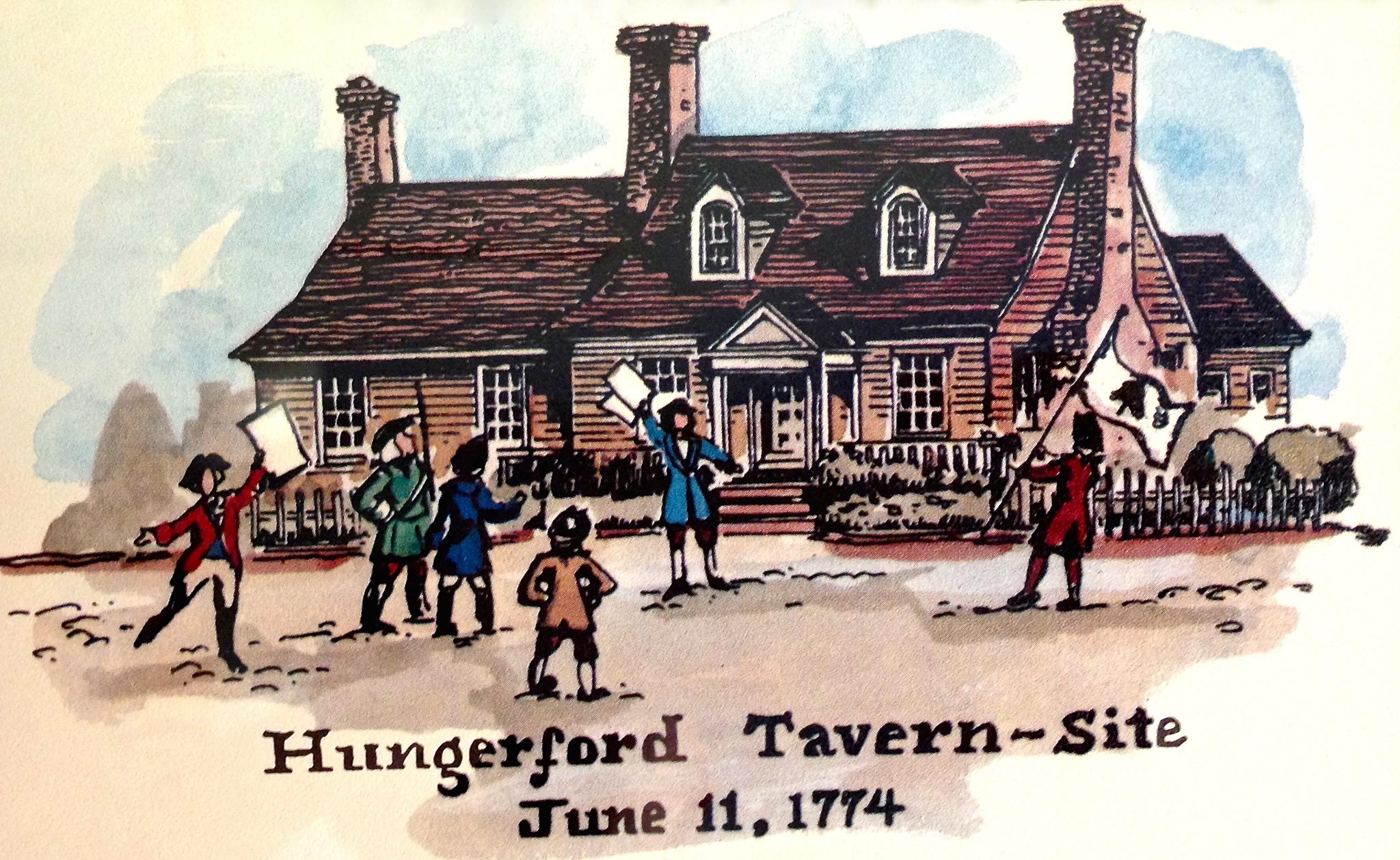 Built as a one and a half story house by Joseph Wilson in 1753, by 1755 this building had become a tavern known as Owen’s Ordinary. The road that the tavern was situated on was well traveled and connected several sections of the Maryland colony. For example, British General Braddock and his Aide-de-camp George Washington camped outside Owen's Ordinary in the spring of 1755 while on their march to assault Fort Duquesne.

Taverns in the colonies provided a vital role as a meeting place but also served as an inn for travelers. By the laws of the colony at the time, any tavern was required to have “six furnished bedsteads for travelers”1 Taverns also served a social role as a place beyond the workplace and the home where people could meet in public, discuss news, and make business deals.

Resolved, unanimously, That It is the opinion of this meeting that the Town of Boston is now suffering in the Common Cause of America.

Resolved, unanimously, That every legal and constitutional measure ought to be used by all America for procuring a repeal of the Act of Parliament for blocking up the Harbour of Boston.

Resolved, unanimously, That it is the opinion of this meeting that the most effectual means for the securing of American Freedom will be to break off all Commerce with Great Britain and the West Indies until the said act be repealed and the right of taxation given upon permanent principles.

Resolved, unanimously, That Mr. Henry Griffith, Dr. Thomas Sprigg Wootton, Nathan Magruder, Even Thomas, Richard Brooke, Richard Thomas, Zadok Magruder, Dr. William Baker, Thomas Cramphin Jr., and Allen Bowie be a committee to attend the general committee at Annapolis, and that any six of them shall have the power to receive and communicate intelligence to and from their neighboring committees.

Resolved, unanimously, That a copy of these our sentiments be immediately transmitted to Annapolis and inserted in the Maryland Gazette.

These declarations were far more radical than the negotiated declarations of the Annapolis Convention of 1774. It is also significant that this document did not mention the Maryland Colony, but rather “The Common Cause of America.”

In 1776 at the Maryland Constitutional Convention, Thomas S. Wootton proposed to divide up the large Frederick County into multiple smaller counties. The measure passed and by 1777 the Hungerford Tavern became Montgomery County’s courthouse, polling place, and a small jailhouse built on for runaway slaves.

On 13 August 1777, Hungerford went to court and guaranteed for Leonard Davis to take over the license of the tavern. By 1780, Hungerford had been elected Justice of the Peace for Montgomery County and was a member of the Lower House. The tavern was bought and sold numerous times over the years and by 1847 was bought by Susan Russell whose father Joseph Wilson built the structure almost 100 years earlier. In 1911 the DC Chapter of the Daughters of the American Revolution attempted to buy the Russell House, but were unable to find incontrovertible evidence that the house was the same as the tavern. By the time public interest grew it was too late and the house was razed to build a new Baptist church. The site of the tavern is now occupied by a branch of BB&T Bank.

This tour of historic sites begins at St. Mary's Church and continues on to the former rail station of the Baltimore and Ohio before reaching historic courthouse. The tour also includes several museums and a research library along with civic buildings, cemeteries, and other landmarks.