Kirkside - Home of the Marshall County Chamber of Commerce

This historic home was constructed in 1877 and now serves as the home of the Marshall County Chamber of Commerce. Richard Ferrell constructed the two-story Italianate style home which is known as Kirkside and the Ferrell-Holt House owing to two families who lived here (the Richard Ferrell family and the J. Howard Holt family). The home was later purchased by the nearby Methodist church as a location for community youth activities. The painted brick home features a hip roof and two corbeled chimneys and was placed on the National Register of Historic Places on February 27, 1987.

Kirkside, looking west from Jefferson Avenue. Today, the historic home has been completely renovated and houses the Marshall County Chamber of Commerce office. 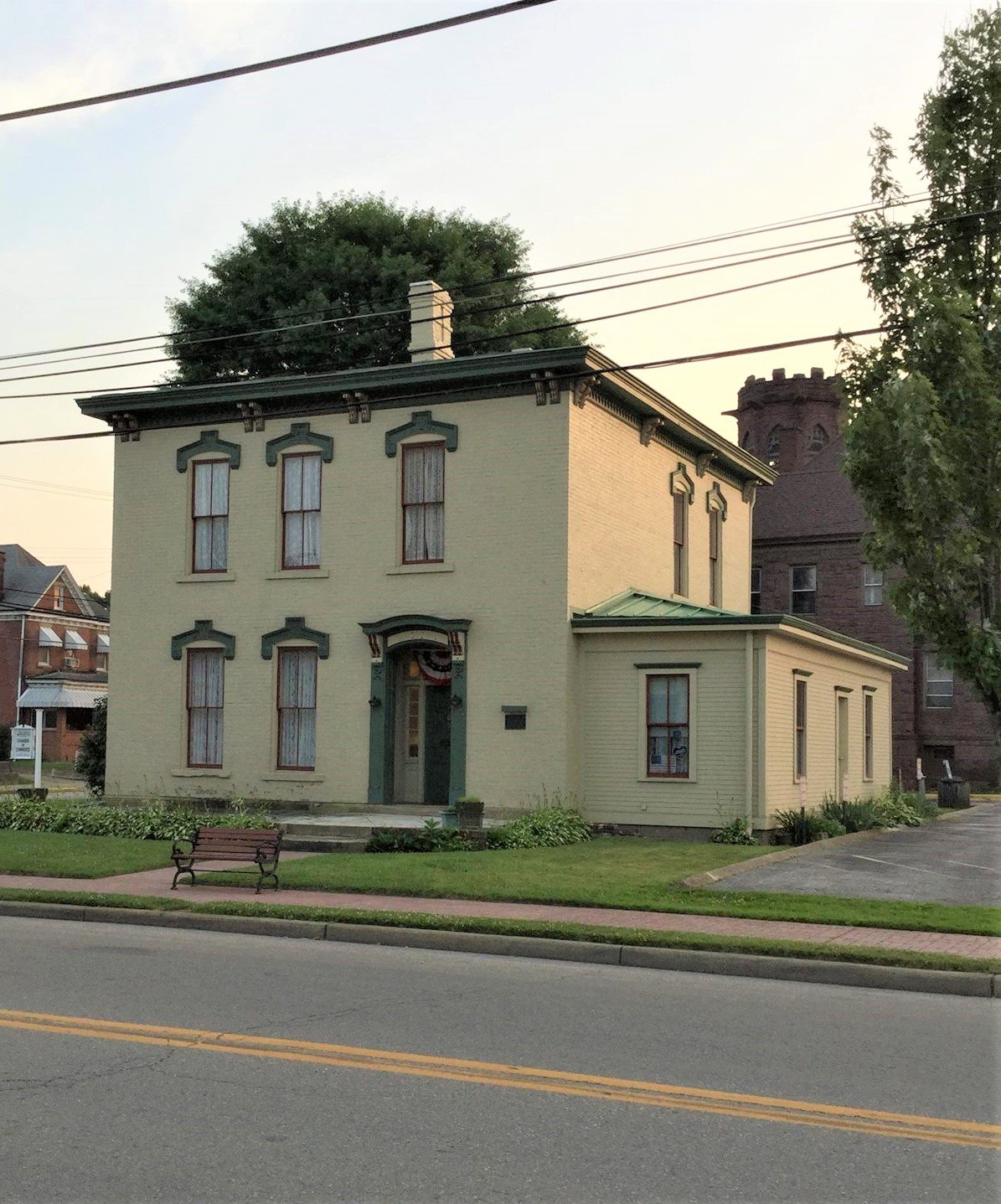 The entranceway through the main door of Kirkside. 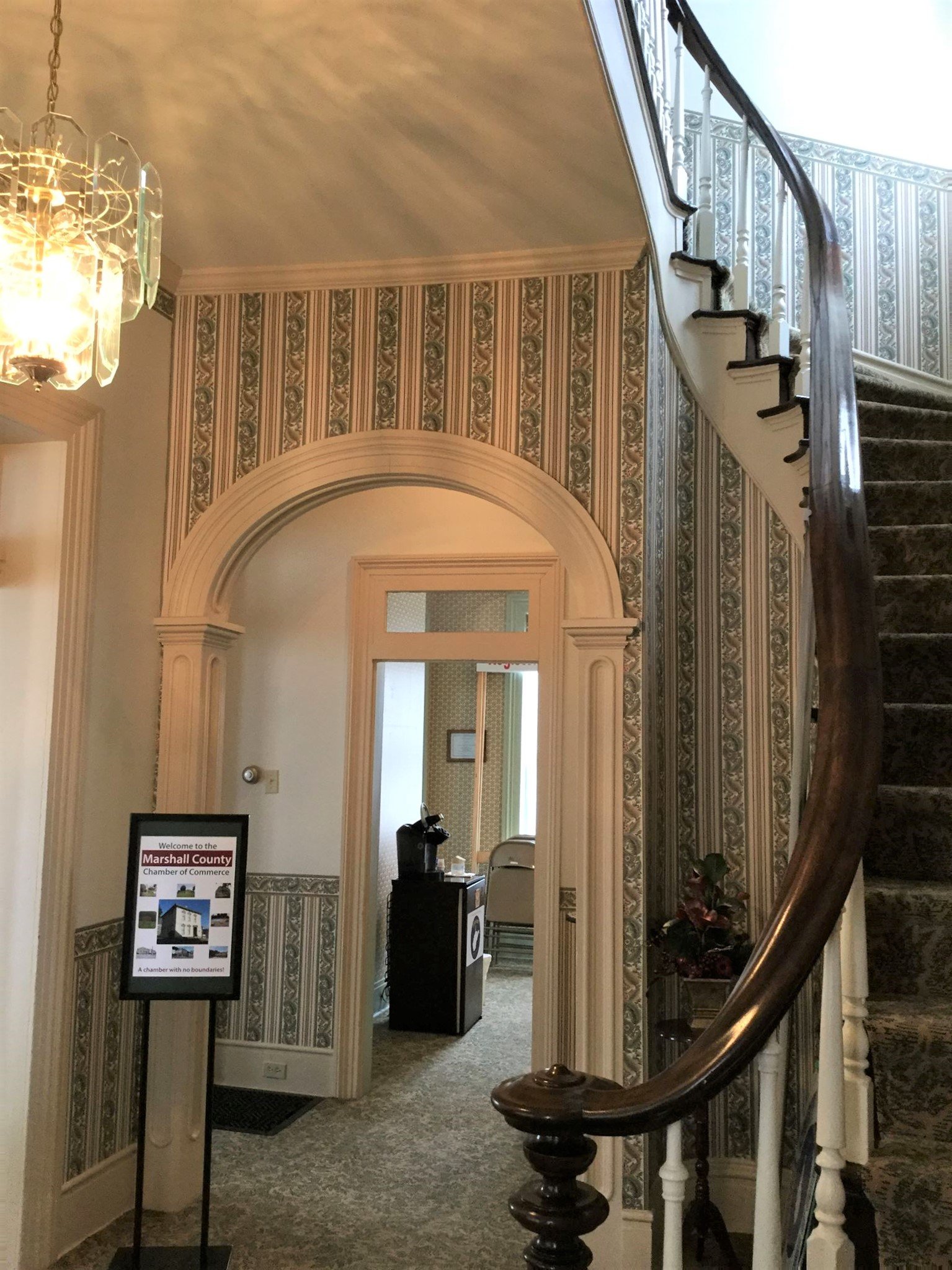 The builder and original owner, Richard Ferrell, was a local businessman, owning a hardware and dry goods store. He sold the house to J. Howard Holt on April 7, 1898. Holt was a civil engineer and self-taught lawyer whose most famous case was that of Holly Griffeth. Griffeth was originally sentenced to life imprisonment in 1915 for the death of a Braxton County law officer. He escaped six weeks later and was convicted to killing two more men as a fugitive. In 1921, Griffeth escaped the Moundsville Penitentiary after darkening the interior by cutting a belt. He stabbed a man to death on his way out. He hired a man to row him across the Ohio River then killed him. J. Howard Holt was assigned his case and retained as his lawyer through much of the legal wranglings. Holt was able to convince two separate juries to give the man life in prison instead of the death penalty.

While in prison, Griffeth amassed a small fortune of $26,000 by operating a tailor shop. He was viewed as a model prisoner and placed in medium security in 1959, but escaped again when he was sent out for medical treatment. He was recaptured and spent the rest of his life in Moundsville's penitentiary. Davis Grubb's novel Fool's Parade was built on a central character who had earned a large sum of money while in prison then was released for good behavior into the community (with his money) during the Great Depression.

J. Howard Holt and his family were all skilled musicians and Mrs. Anna Holt was an outstanding vocalist. The family orchestra, "The White Rose," toured eight seasons presenting concerts. They ran "The Forest Holt Brennan School of Music, Dancing, and Expression" which gave many local youths their start in music. During his last two years of life, J. Howard Holt gave away 50 violins to Moundsville children as a way to encourage their study of music.

Holt died in 1930 and the First Methodist Church (now Simpson United Methodist Church) purchased the property to develop it as a youth center which officially opened December 5, 1939. It was during its use as a youth center that the name changed to "Kirkside." The hours of operation for the youth center were 3:00-5:00 in the afternoon and 7:00-11:00 in the evening with high school students asked to leave by 10:00. Average daily attendance was 125 people that first year. Activities included playing the piano, singing, ping pong, leather crafting, bead working, sketching, woodcraft, pool, chess, and table games. The building could also be rented and was used for ice cream socials, various club meetings, and church dinners. There was an outside fireplace that was popular for wiener roasts. The upstairs served as a residential space for the directors.

By the late 1970s the house became increasingly expensive to heat and maintain in good condition. In 1983 the pool table, ping pong table and larger items were transferred to the upstairs area of the church and Kirkside was used for storage. In the mid-1990s, the Moundsville Historic Landmarks Commission applied for and received a grant to restore the building. Prisoners from the Penitentiary performed the plaster removal and other demolition work then contractors rewired the building and added the dry wall. The Grisell Funeral Home donated the furnishings for the downstairs rooms as well as the wallpaper.