The Waller House emerged during Chicago's expansive rebuild following the Great Fire of 1871. The house, built in 1875-1876, was located in one of the city's wealthiest neighborhoods, now known as "The Gold Coast." Besides standing as a monument to those two histories, from 1921 until today, it has served as the center for the Palette & Chisel Art Academy, part of a long historical tie between the art community and the Gold Coast. 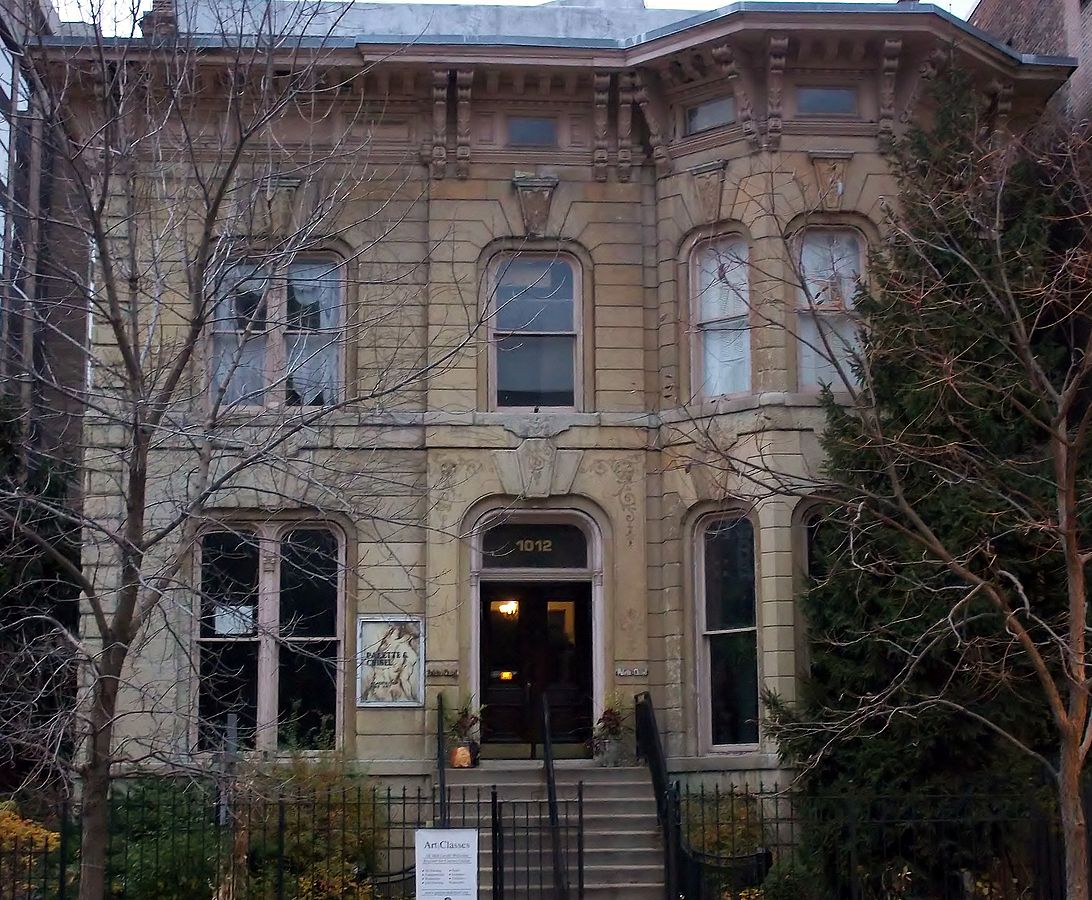 The Great Chicago Fire of 1871 had a profound influence on the city, and the city's architecture usually serves as monuments to that time of substantial growth and construction, which includes the William Waller house. Built in 1875-76, the Waller residence emerged in a neighboorhood that became known as the Gold Coast -- home to some of the city's wealthiest residents. As such, it also became a place that embraced "the finer things in life," including the arts. The Wallers resided in the house for a few decades, but since 1921, the house has served as the home to an art organization known as the Palette & Chisel Art Acadamy.
In 1876, William, the oldest of four Waller brothers, and his wife, Ann Adelia Johnson of Louisiana, moved into the Italianate-designed house. Most houses built in the city at that time were connected, but the Waller House was freestanding, a sign of the Waller wealth. The Italianate design included a stone exterior, a double bay front, a bracketed and ornamented cornice, arched windows, and ornate keystones.  The Waller House exists as one of the best-preserved examples of a free-standing Italianate Designed home in the city.
The house arose in an area known referred to as the "Gold Coast" area, which existed as somewhat exclusive until around 1920 when the Michigan Ave. Bridge fostered movement from the city's central and southern portions to the north. However, the Gold Coast largely remained a place for financial elites.
Though the Waller family proved highly influential in the city for several generations, the house remained the property of the Wallers for only a few decades.
Ownership of the house changed hand several times before it was finally purchased in 1921 by its current owner, the Palette & Chisel Academy of Fine Arts— a lauded organization comprised of well-regarded painters, etchers, sculptors, and illustrators.
In fact, while one can argue that its history is tied to its original owner, Palette & Chisel has existed in the city for more than 120 years and occupied the Waller building for nearly a century.
Moreover, much occurred in the building during that span. From the organization's website, it states "From iconic artists and not so famous artists to the bullet holes in the wall, the Palette & Chisel has a history as colorful as the art we produce." And adds, "The bullet holes in the wall?   What’s wrong with a drunken housekeeper shooting up the place now and then? Oh, and by the way, rumor has it that Al Capone’s henchmen hid their get-away cars in our coach house."
Furthermore, the history of the art program is worth noting, too. Palette & Chisel is not an art school, but rather an art community focused on realism and serving diverse types of artists, age ranges, and skill levels -- mostly through workshops, classes and informal gatherings.  Members today usually dedicate 60 hours every week to attending open studio sessions with live models.
All told, the house enjoys many layers of history. It's an architectural reminder of both Chicago's post-fire rebuild and the development of a wealthy neighborhood. The building first served as the home to an affluent family that proved influential in Chicago for decades to come, including in the art world. And, given the area's ties to prosperity, the community flourished in the Gold Coast, allowing for a place such as the Palette & Chisel Academy to successfully operate in the building for nearly 100 years.