The Markay Theater opened as Jackson's premiere movie house in 1930 and was an instant success despite the economic turmoil of the 1930s. The theater's name was the result of a public contest, asking residents to suggest names for the theater and offering a prize of free theater passes for the best suggestion. The contest ended in a tie between two women, and the tie was resolved by combing the names of the owners' wives, Marian and Kathryn. The theater closed in the second half of the 20th century and was abandoned along with many other downtown theaters between the late 1970s and early 1990s. In 1996, interest in reviving the downtown area led to a massive restoration project. Thanks to local residents and preservationists, the historic theater was restored, renovated, and reopened in 2015. Today, the theater hosts movies and stage performances for the local community.

The exterior of the restored Markay Theatre 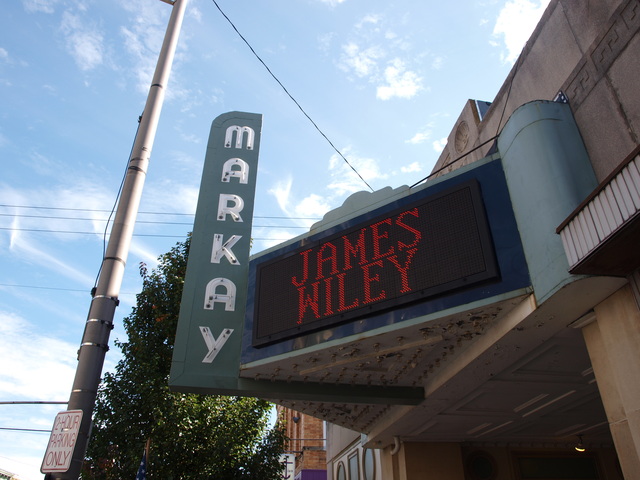 The theater was restored over a period of nineteen years beginning in 1996 and now serves as a home for theatrical productions and meetings in addition to offering movies.

The Markay Theater was originally built by the influential Jones family in 1930. In 1872, Welsh immigrant Thomas T. Jones bought Globe Furnace and Fulton Furnace in Jackson and created the Globe Iron Company. His son, Eben Jones, later became the president of Globe Iron.  Eben Jones foresaw the decline of the iron industry in Jackson, but his son, John E. Jones bought his father's shares of the company and innovated the production of silvery pig iron, which completely changed and revitalized the iron industry in Jackson. John E.'s older brother, Edwin Jones, was an industrialist and developer in Jackson. It was Edwin Jones who built the Cambrian Hotel on the corner of Main and Broadway Street. Edwin Jones was the father of Dwight and Donald Jones, and it was the combination of their wives names, Marian and Kathryn, that formed the name Markay.

The city of Jackson had the opportunity to purchase the old theater for many years after it closed, but local leaders did not believe that this was the best use of taxpayer funds at the time. Fortuitously, the city also did not have the funds needed to demolish the aging building.  In 1996, it was agreed upon that the city would take ownership of the theater for the Southern Hills Arts Council, which would then pay rent on the building amounting to one dollar per year. The Council's obligation was to renovate, maintain, and operate the theater. The restoration of the theater began in 1996 when the mayor of Jackson, Tom Evans, suggested the project to the Southern Hills Arts Council president, Maxine Plummer, and executive director, Barbra Summers. The main reason the restoration process took nineteen years to complete was that the funds necessary for each step of the process had to be acquired before each phase of the restoration could begin. By the time the restoration was completed in 2015, two million dollars had been spent on the theater’s renovation.

In 1997, a portion of the building was opened as the Markay Cultural Arts Center. The lobby was opened as an art and cultural gallery, and the adjacent room that was once a small third movie theater was converted into a classroom/meeting space. The restoration of the auditorium was by far the largest part of the restoration. First, the years of accumulated debris had to be cleared away. A plan was then created to repair the damages caused by years of neglect and to convert the space into a theater that could accommodate live performances and the installation of a retractable projection screen and a digital projector. Enormous pains were undertaken to save six bas-relief sculptures that were part of the original theater. The panels depicted an ironworker, a railroad man, a farmer, a miner, a woman hoeing a garden, and a woman carrying a bushel of apples. Each panel represented a key aspect of Jackson's development and are today the most distinctive and striking features of the theater. The city found the panels to be so representative of Jackson's history that replicas were placed on a recently constructed overpass above State Route 32 in Jackson.