The Mercedes-Benz Louisiana Superdome (Formerly the Louisiana Superdome before Hurricane Katrina) is a National Football League stadium situated in New Orleans, Louisiana. The stadium was founded to be the official home-front stadium for the New Orleans Saints, and it was a huge milestone for the city. The Superdome is located at 1500 Sugar Bowl Drive, New Orleans, Louisiana 70112, adjacent to the neighboring Smoothie King Center (Home of the New Orleans Pelicans) in New Orleans. The stadium gained notorious recognition in August/September 2005 during/after the rampage of Hurricane Katrina, due to the fact that it was a shelter of last resort for many refugees that could not or would not leave the city, and very extensive damage was caused to it as a result. The stadium was acquired by German motor company Mercedes-Benz, and it was added to the National Register of Historic Places in 2016. 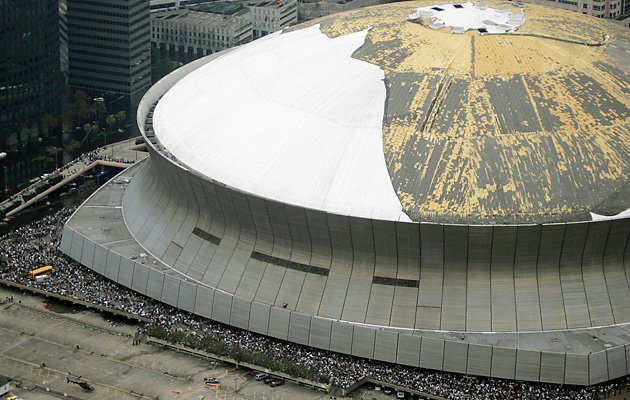 The Mercedes-Benz Superdome is situated in the Central Business District of New Orleans, Louisiana beside the neighboring Smoothie King Center. The stadium broke ground on August 12, 1971 after it was passed by legislation in 1966, and it was officially opened to the public on August 3, 1975. It was created to be the official home stadium for the New Orleans Saints, as well as for nearby college football games and the Final Four. The Superdome was a groundbreaking project for the city, as well as a monumental milestone.

The Superdome gained notoriety in August 2005 during Hurricane Katrina. Approximately 20,000 people attempted to take refuge within the cramped stadium to ride out the storm, and this is where they suffered for 5 days due to the terrible conditions. There was no electricity to keep people cool, there was not enough food and water to supply to everyone since no one knew there would be this many people to support, it was humid and wet due to holes in the stadium ceiling, and the plumbing was malfunctioning, forcing many people to do their business in close range of others. The bottom field level of the stadium was completely flooded and filled with people's trash and bodily waste that accumulated over time. There were National Guardsmen outside of the stadium making sure no one left the stadium, and they barricaded the entrances due to slight rioting by civilians inside. There were reports of gang activity, drug trafficking, as well as accounts of people being raped. Surprisingly enough, there were only 3 accounts of deaths inside of the Superdome, with one listed as a suicide.

After Hurricane Katrina, the Superdome was closed for 13 months and underwent drastic repairs. It was reopened just in time for a re-welcoming game in 2006, and it was again re-opened to the public. On October 3, 2011, Mercedes-Benz announced that were buying the rights of the Superdome, acquired ownership of it on October 23, 2011 and effectively naming it the Mercedes-Benz Superdome. In 2015, the city of New Orleans celebrated the 40th anniversary of the Superdome, commemorating the occasion by decorating the stadium with a special logo and the inscription "40 Strong".