The Hermann Heights Monument is a statue erected in New Ulm, Minnesota. The statue depicts Hermann the Cheruscan, also known by the Latin name Arminius, but locals refer to the statue as Hermann the German. This statue commemorates the Germanic victory over the Romans at the Battle of the Teutoburg Forest, a symbol of German patriotism. The only National Register of Historic Places property of its kind in Minnesota, the monument remains an impressive remembrance of German ancestry for many Minnesotans. Visitors to the statue can climb the spiral staircase to an observation platform at the base of the statue, which commands a view of the town and the Minnesota River Valley below. 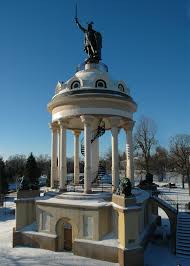