Originally constructed between 1909 and 1916, this was a Victrola cabinet factory that build wooden cabinets for record players and radio sets. The Victor, known affectionately as the “Nipper Building” and listed on the National Register of Historic Places, was originally built to be the anchor building for the Victor Talking Machine Company, later to become RCA Victor, one of the most successful companies of the early 20th century. It was also the headquarters of the Victor Talking Machine Company, later RCA Victor. It is still known as "The Nipper Building," although its official name became 'The Victor' after it was transformed into retail space and condos. The building became known as "The Nipper Building" because of the images of the radio companies adopted the image of a dog named Nipper listening to the radio. The image was an adaptation of the painting "His Master's Voice." 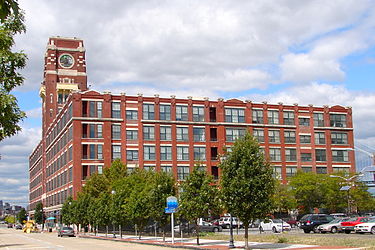 Stained glass window in the building's tower featuring Nipper listening to the radio. This was an adaptation of a 1901 painting called "His Master's Voice" 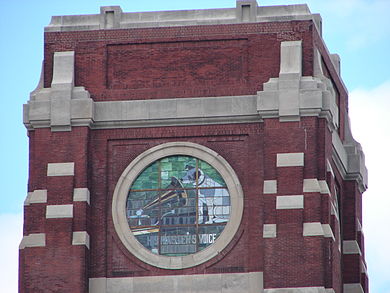 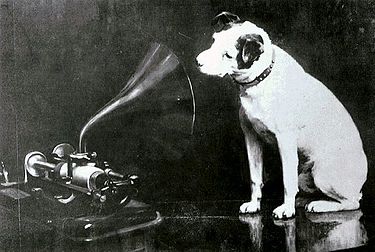 RCA purchased the Victor Company in 1929. The purchase included the Camden manufacturing plant and the trademark of Nipper listening to his master's voice. The building had four windows depicting the Nipper trademark in 1915. In 1968, RCA began using a new corporate logo and de-emphasized the Nipper trademark. The windows were removed the following year and replaced with RCA's new logo painted on large sheets of plywood. Beginning in 1976, partly in response to public demand, the Nipper trademark was reinstated to many RCA products and used again in RCA advertising. On April 10, 1978, RCA held a ceremony in Camden dedicating four new stained glass windows, identical to the originals, which had been reinstalled in the tower.

RCA ceased manufacturing operations in Camden in 1992. The building was vacant and most other RCA buildings were destroyed. In 2003 tax credits and investment revenue led to the current development plan of retail space and condos.