Located on the Minneapolis-St. Paul International Airport and operated by the Minnesota Air National Guard Historical Foundation, the Minnesota Air National Guard Museum houses one of the largest collections of military aircraft and related equipment in the surrounding five-state region. It was founded in 1984 and features 21 aircraft on display outside—these include fighters, cargo planes, helicopters, and utility aircraft used by the US military dating before WWII to the present day—and several exhibits in the hangar exhibit hall. Objects in the hangar include ejections seats, flight simulators, jet and piston engines, and weaponry ranging from WWI to today. There are also exhibits on the Doolittle raid and the Tuskegee Airmen. The museum also houses a library which has an extensive collection of historical documents, photographs, manuscripts and books.

One of the fighter jets on display outside of the hangar exhibit hall. 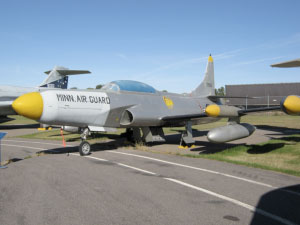 The Minnesota Air National Guard was founded in 1921 and was the first such guard wing established in the country. It has become the 133rd Tactical Air Wing and the 148th Fighter Interceptor Wing. The museum was founded in 1984.

The museum does not have regular hours; it only offers guided tours. Call the museum to schedule a tour.