The University of Georgia Chapel is located on UGA’s historic North Campus quad. Built in 1832, the Chapel was one of the first Greek Revival buildings in Athens. It was the finest building on campus at the time it was built and was the center of student life in the early days of the university. Seating 433 people, the Chapel now serves as a venue for various events such as campus lectures with guest speakers and weddings.

The marker in front of the Chapel Bell. http://www.waymarking.com/waymarks/WM8XCC_Chapel_Bell_UGA_Campus_Athens_GA 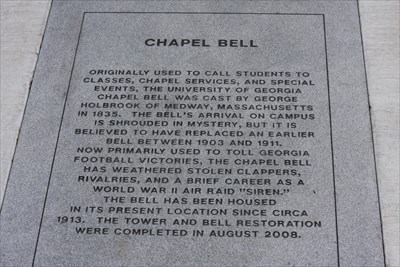 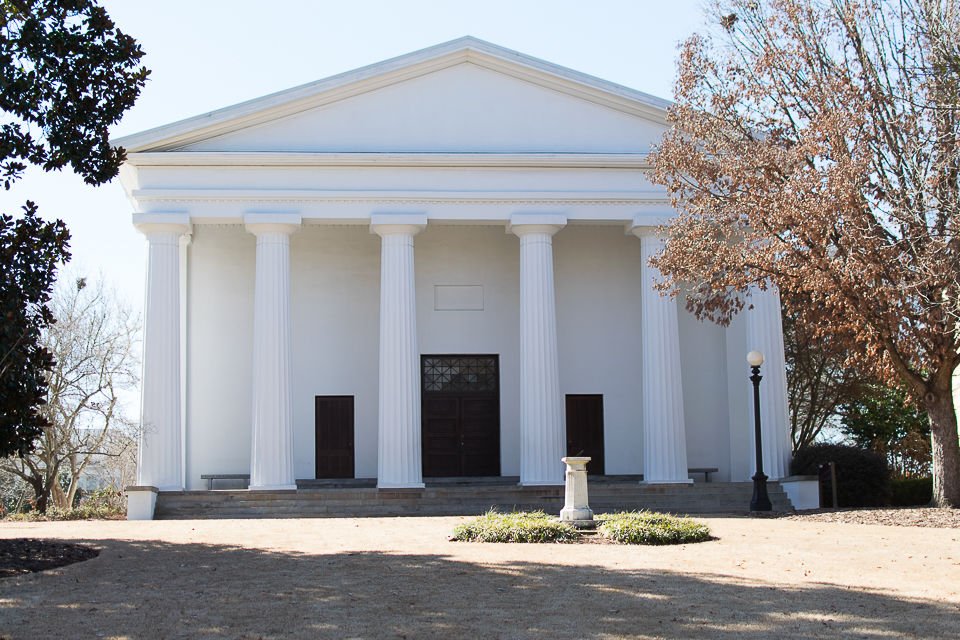 The University of Georgia Chapel was built in 1832 for $15,0001 by Benjamin Towns and James R. Carlton. At the time, the Chapel was one of the first Greek Revival style buildings in Athens and by far the finest building on the university’s campus. Something unknown to many is that the chapel that you see today is not the first chapel that was built at the University of Georgia. The original chapel was built by Reverend Hope Hull in 1807 and a belfry was added later that was constructed by Reverend Hope Hull with the help of a one-hundred-dollar donation from the university’s Board of Trustees2. The original chapel stood until 1830 when a fire broke out, burning the entire structure but the bell.

In the early days of the university the Chapel was a center of campus activities. A daily mandatory religious service took place there in addition to assemblies and commencements. If you look from the front of the chapel to the quad, you will see a sundial. This sundial marks the site of the famous Toombs Oak. Robert Toombs, a famous senator and Confederate general, was expelled from the university in 1825. As legend has it, he reappeared at commencement and spoke so powerfully under the oak tree that the audience in the chapel left to hear him. While this story is quite romantic, it is not true – but still makes for a great story.

The Chapel became such a landmark of the campus and surrounding community that the city’s boundaries were measured from a midpoint at the base of the chapel steps, and extended in a 360-degree radius several miles away3. During the Civil War, the Chapel served as an army hospital and later as a prison for 431 Northern soldiers taken nearby in 18644. After the war the university was presented with one of the world’s largest framed oil paintings, Interior of St. Peter’s Rome by George Cooke. The painting was presented to the university by Daniel Pratt in 1867.

The famous Chapel Bell was originally located on the chapel roof but in 1913 the tower was found to be rotten and was removed5. The bell was subsequently placed at the top of a wooden tower at the back of the Chapel, where it remains today.

The bell was initially used to call students to chapel as well as to signal class changes, but it had other uses as well. Football was originally played on Herty Field next to the Chapel, and in the 1890s it was the freshmen’s duty to ring the bell after each victory6. During World War II the bell was used for a period as an air raid siren. Now the Chapel Bell is rung in celebration of football wins as well as personal accomplishments such as making an A on a test or graduating. A marker about the bell can be found in front of the bell tower at the back of the Chapel.