Via Verde, which directly translates to "Green Way" is the South Bronx's leading sustainable and affordable low- to middle-income housing complex. The project, built out of concern for a healthy living space in the Bronx, deviates from prior American Housing Projects by virtue of utilizing sustainable design. The team presents sustainable design as not only an effective environmental performance, but as a valuable strategy that can afford healthy lifestyles to South Bronx residents. The South Bronx, has one of the leading rates of both obesity and asthma in the country, in part due to poverty and air pollution. Hence, the need for a community space that is successful in making healthy living both accessible and affordable is all the more striking. The complex is comprised of 222 low-to middle-income residential units, 40,000 square feet of green roofs and outdoor spaces including a rooftop vegetable garden, and south-facing solar panels. Additionally, there is an indoor fitness facility, a Montefiore Medical Center wellness facility, and a pharmacy on the ground floor. Via Verde’s responsibility to improve its residents' well-being by incorporating engaging green spaces into the design structure of the complex has galvanized the attention of the public, developers, architects and government agencies alike who seek alternative solutions to traditional architectural housing models. 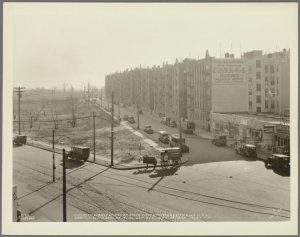 Map of Westchester Avenue, Brook Avenue and 156th Street in 1911 (area where Via Verde is located today) 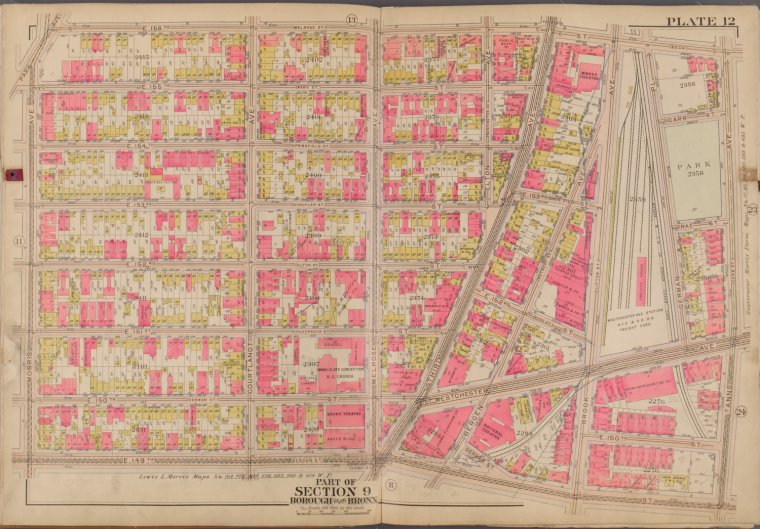 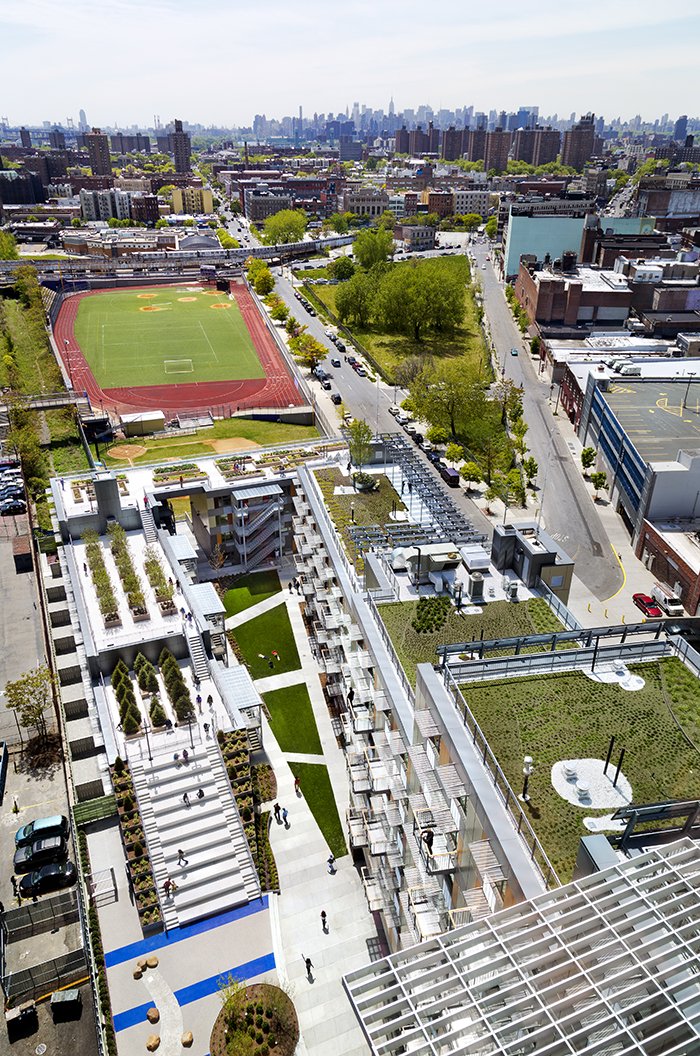 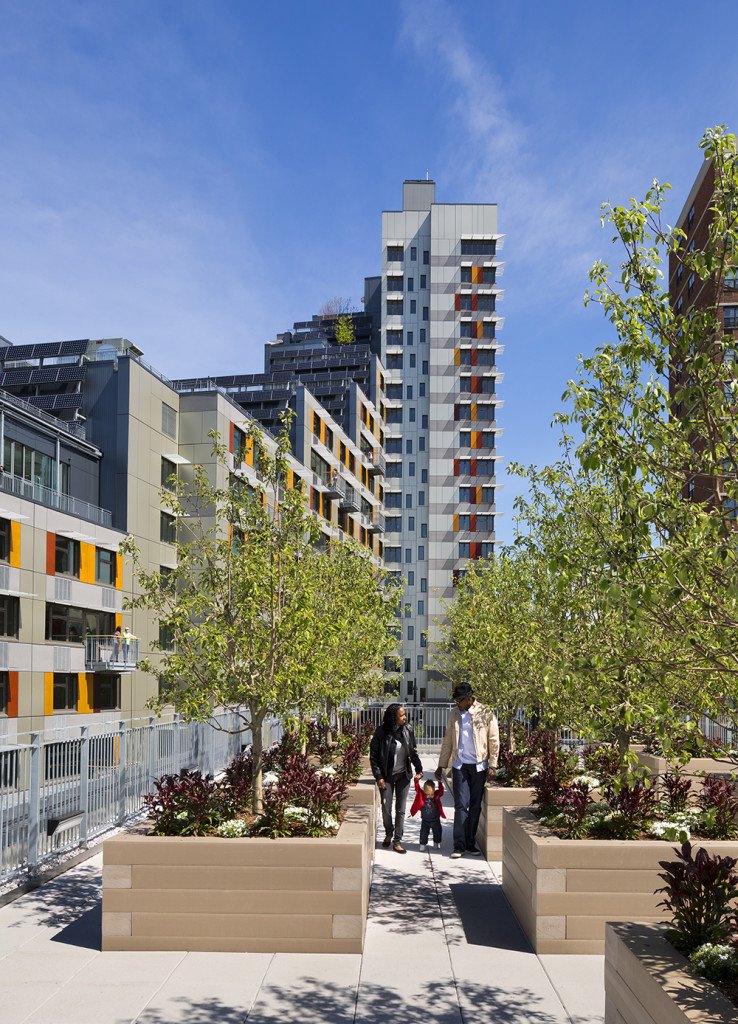 The Via Verde site can be traced back to Gouverneur Morris, a prominent delegate to the New York Provincial Congress in 1775, who initially inherited the parcels of land that would later constitute Melrose and Morrisania from his mother. When he passed away in 1816, the land was passed down to his son Gouverneur Morris, Jr. In an effort to change the land from rural to urban and create an ideal workingman’s village, Gouverneur Morris, Jr. sought to industrialize the site. Therefore, the Port Morris hub and railroad were built. Not only did the Port Morris Branch and railroad allow for easy access to and from the city’s center, but in doing so, incentivized more businesses to emerge near the hub and railroad stations.

Along Brook Avenue, which bordered the site, emerged a number of meat dealers including: Swift & Co, Armour & Co., Conron & Bros, and Morris & Co. The site was particularly attractive to meat dealers who could efficiently store their quality meats behind their dealerships in refrigerated freight cars on the Westchester Avenue station (a part of the Port Morris branch). While the meat houses were flourishing economically, the freight stations, with vats of stored frozen meats, fostered a massive rat infestation problem. Therefore with the growing number of rats, the soil became completely contaminated.

In the early 20th century the maintenance of the Port Morris railroad was underwhelming. Due to the New York and Harlem Railroad Company’s focus on modernizing trains by replacing old trains with new ones, many of the new trains could not fit the Port Morris tracks. Additionally, the surge in crime and poverty after World War II in the South Bronx paved the way for the complete negligence of the Port Morris railroad. The situation only worsened in 1987 as a new Railroad Branch was proposed by private developer Mr. Francisco Galesi. Known as the Oak Point Line, the alternative branch in Melrose that Galesi envisioned could fit more modern trains. Hence, the Oak Point project detracted attention away from the need to restore the Port Morris line and railroad.

In 2003, CSX transportation ultimately declared the Port Morris branch's abandonment and vacancy. The site, tucked between Brook Avenue, Westchester Avenue and 156th Street, had by then become a homeless encampment or, as many local residents called it, “The Swamp.”

In pursuit of revitalization of the barren site, a group of architects, including Dattner Architects and Grimshaw Architects, and developers, including the Phipps Houses Group and Jonathan Rose Companies, came together in 2007 to enter the New York Housing Legacy Project competition to propose innovative affordable housing within New York City. The team presented a sustainable housing model that sought to engage the Melrose community into a green space within the greater Bronx urban landscape. The team’s ambitious sustainable housing prototype was selected in a competition that included 32 other developers and architects.  Construction began in 2009 and was finally completed in 2012.

Via Verde is truly remarkable in its ability to both foster an innovative design solution and ensure an accessible healthy green space without compromising affordability. As Ruben Diaz Jr., the Bronx borough president, declared at the Via Verde opening ceremony,  “Let it be known...that where the Bronx once burned we are building gardens in the sky.”