Site of the University of North Dakota’s Era Bell Thompson Multicultural Center from 1975 to 2014. The building was constructed in 1914 and served as private residence and apartment rental for sixty years before being acquired by the University of North Dakota (UND) and turned into the multicultural center. After decades of deferred maintenance, the center moved across the street to UND’s Memorial Union, and the former residence and student community center was demolished in 2017. 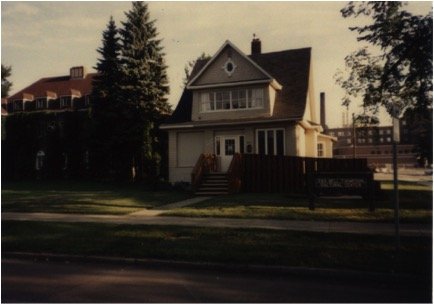 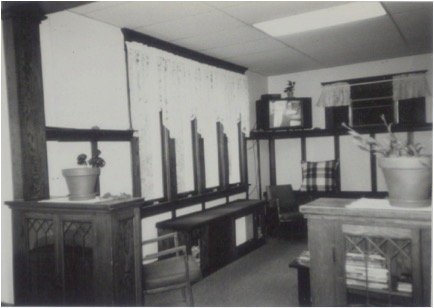 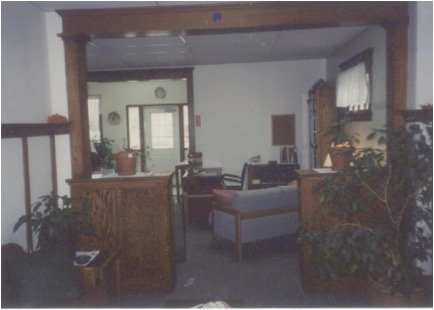 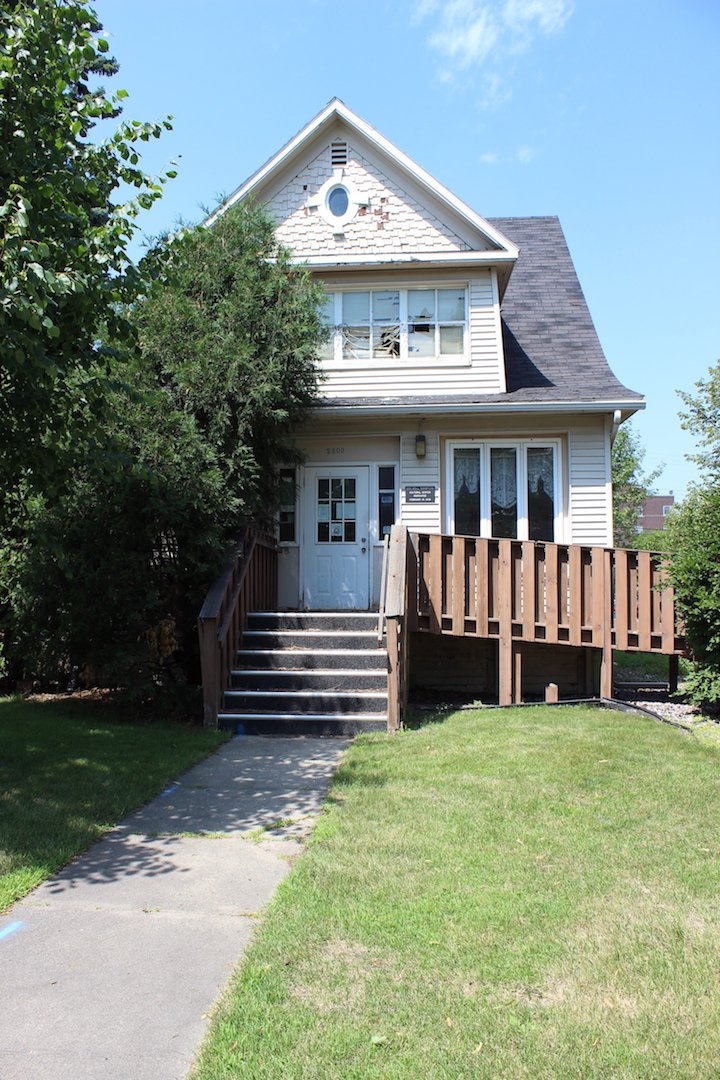 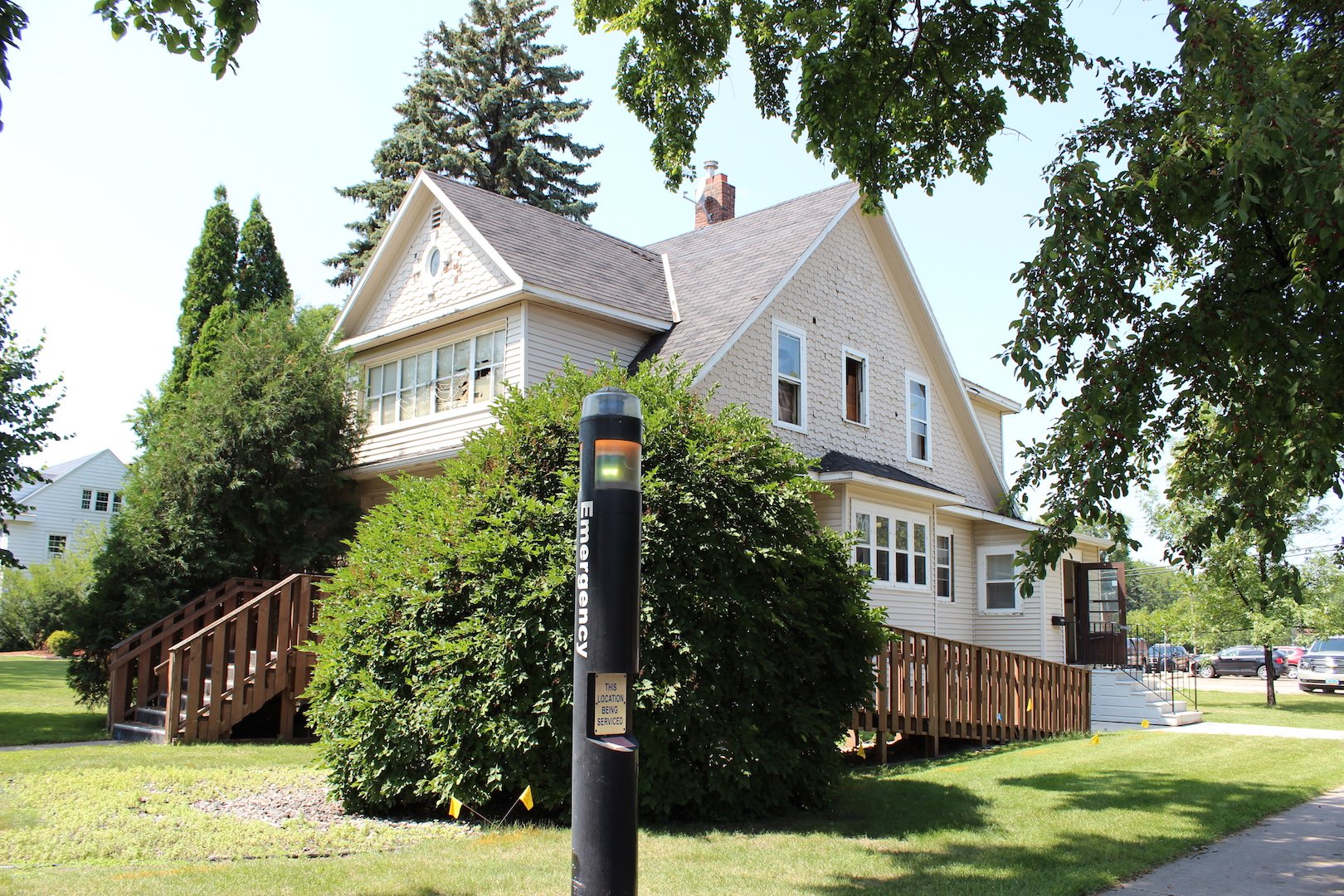 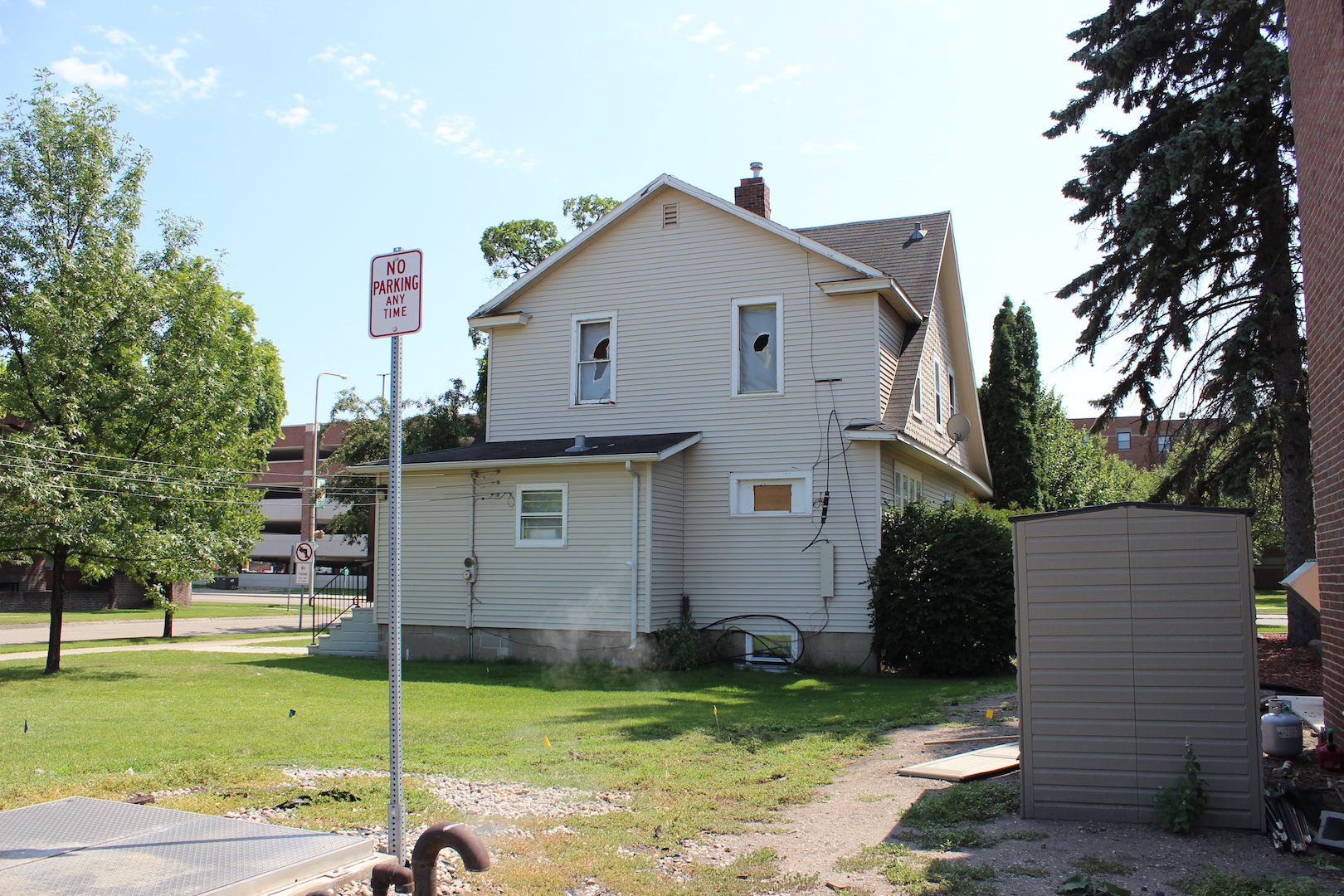 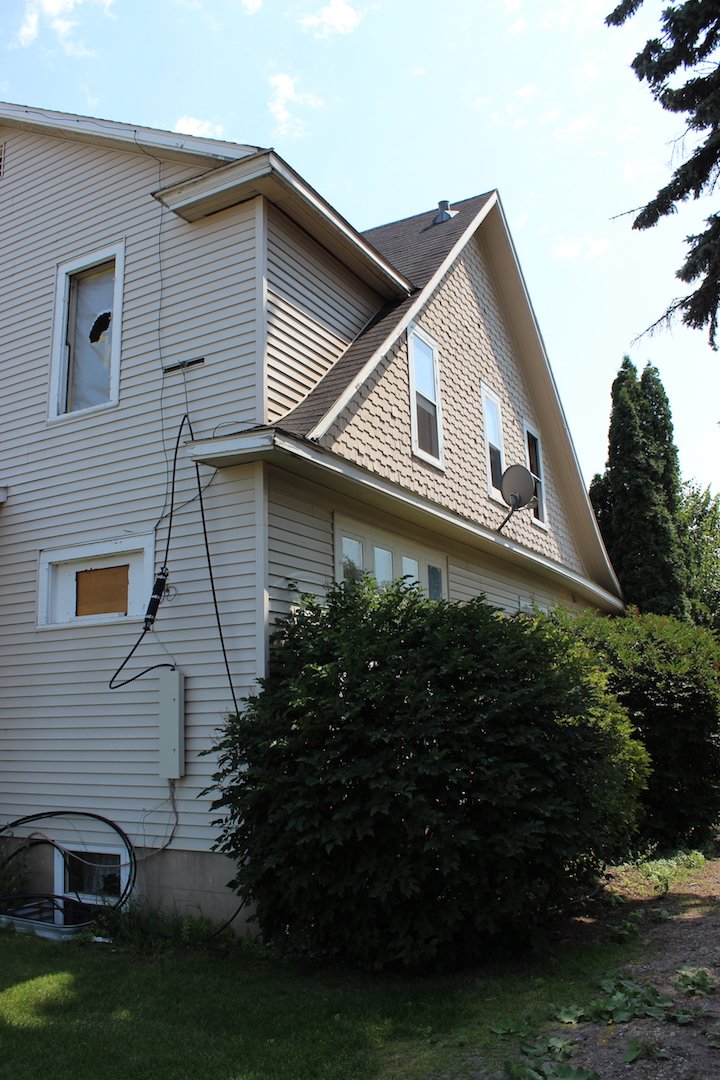 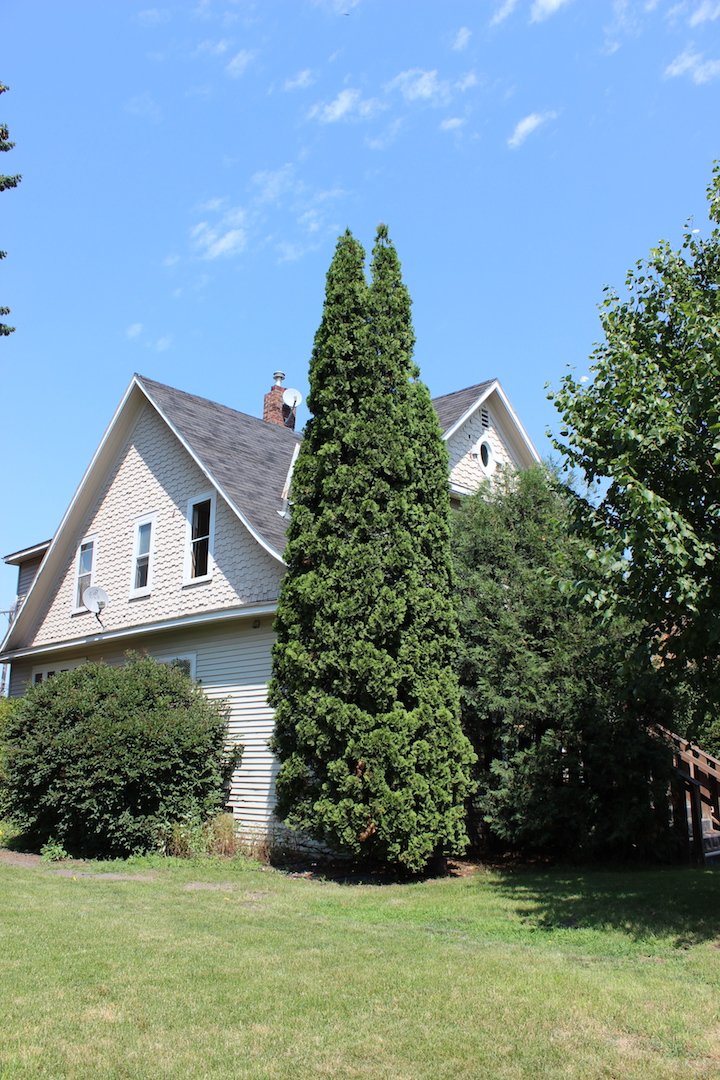 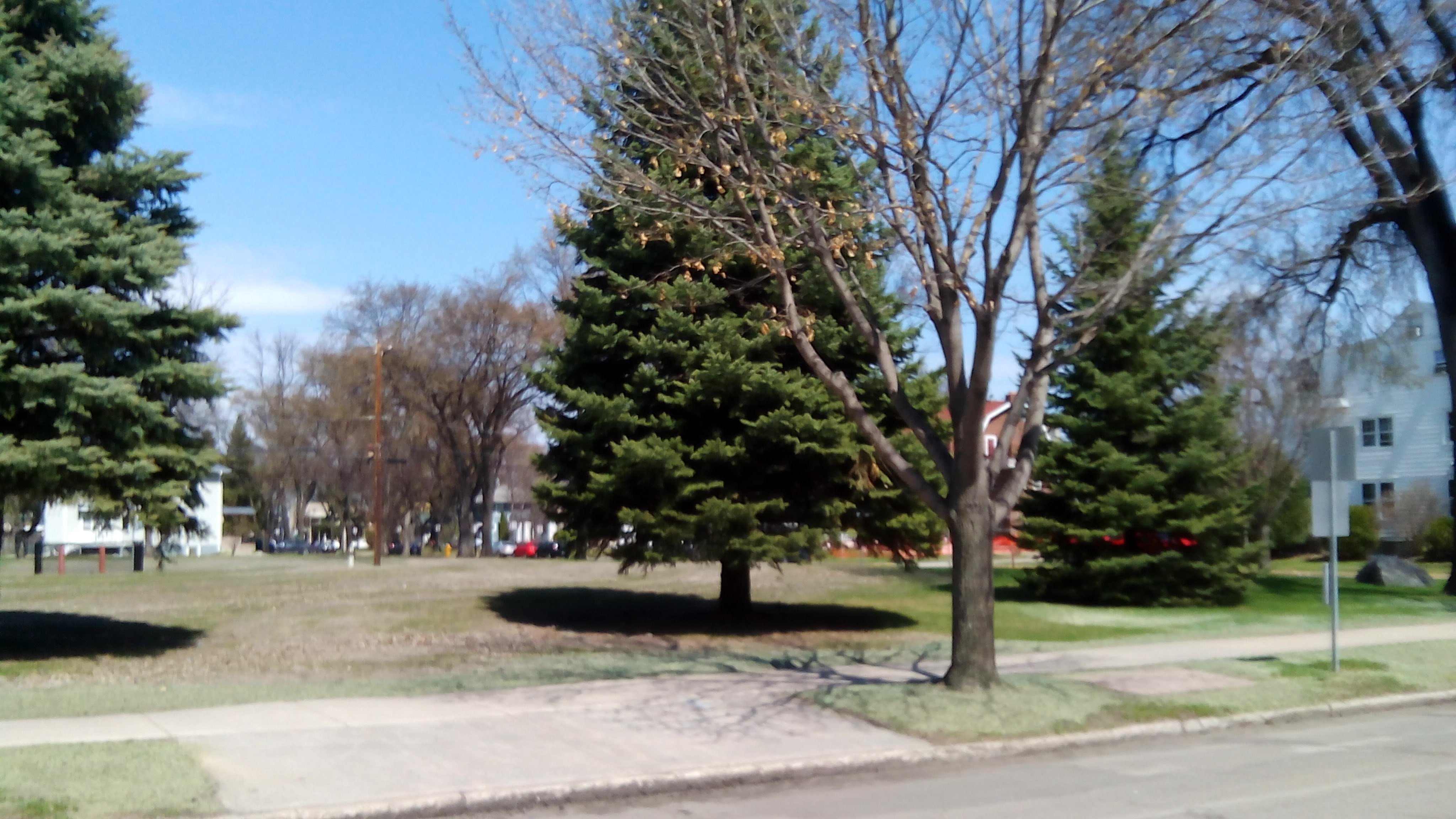 Named after University of North Dakota (UND) alumna and longtime Ebony Magazine editor Era Bell Thompson, the Era Bell Thompson Multicultural Center provides a variety of services to enhance African American, Asian American, and Hispanic American student success at the university. Created in 1970 as the Black Student Union, the center originally supported Black students by providing a space where they could develop their cultural heritage and enforce their identity while attending a predominantly white university. In December 2014, due to budget cuts and aiming to consolidate and streamline programs to offer more efficient services to minority students, the Era Bell Thompson Multicultural Center moved across the street to UND’s Memorial Union and is now part of the Office of Multicultural Programs and Services. The original building at 2800 University Avenue was demolished in 2017 due to the prohibitive amount of maintenance cost that accrued during years of neglect.

The house at 2800 University Avenue was associated with UND for more than a century. Originally built in 1914, it served as private residence, room/apartment rental, and as a community center university for UND’s Black student organization in its long history. The two-story building resembled that of a “National Gable-Front style.”1 Real estate sales records from 1975 indicate that living room, dining room, kitchen, and a den were located on the first floor. On the second floor were four bedrooms, a den, and a bathroom. The full basement also held a bedroom, a ¾ bathroom, and a recreational area. The overall size of the lot is listed as 61x140 feet.2 It first appeared in the Grand Forks City Directory in 1919. That year, the resident of the house is listed as James Wallace Wilkerson. Starting in 1907, Wilkerson was employed at UND for over forty years. At the time of his death in 1948, he held the position of Business Manager for UND. One interesting note, Wilkerson's home also served as the meeting place of the Grand Forks Bridge Club according to the Grand Forks City Directory in 1940. It appears that Wilkerson’s wife Ann continued to live in the house at least until 1951 since she was listed as the owner in the 1951 city directory. By 1954 the house had a new owner, Wilson M. Laird. In April 1954, he obtained a city permit to remodel the kitchen, and three years later the bathroom was renovated. The 1961 city directory lists Wilson M. Laird as owner and resident of 2800 University Avenue.

Dr. Wilson M. Laird started at UND in 1940 as a Geology professor. He was named North Dakota State Geologist in 1941, and the following year became Head of the Geology Department.3 In 1969, Laird took leave from UND to accept the position as Director of Office of Oil and Gas at the US Department of the Interior in Washington, D.C. In 1971, after officially retiring from UND, Laird started to rent out his residence to UND faculty and students. The city directories from 1971 through 1975 list several assistant professors as well as student tenants. During those years, the house was also divided into at least two apartments, as the directories list the address as 2800 and 2800 1/2 University Avenue.

The building’s purpose would change again in 1975 when Dr. Laird decided to sell the property. Although the name of the buyer is not listed, it appears that the property was sold to UND. The Dakota Student from September 18, 1975, reports that the Black Cultural Center moved to 2800 University Avenue the previous week to accommodate the increasing Black student population on campus. Generally, the Civil Rights Movement and the emerging Black Campus Movement during the 1960s attracted little interest on the predominantly white campuses across North Dakota. After the assassination of Dr. Martin Luther King, UND started to offer courses that dealt with the Black experience in America. However, the overwhelming majority of students taking these classes were white. In 1969, there were fifteen Black undergraduate students enrolled at UND.4 During the spring semester of the same year, two Black students interrupted a lecture and objected to Black history being taught by white professors.5 Black students across the nation at historically white colleges and universities (HWCUs) felt like “foreigners in a strange land,” and described themselves as being “stranded in the middle of white culture” in an “alien white atmosphere” and felt that their only choice was to give up their Black identity.6

Although overall enrollment of Black students remained low, it was important to establish a permanent program that would address Black students' issues. The Black Student Program sought to provide a place that created and supported a sense of community and maintains identity in a culture that was overwhelmingly white. Black students also thought it essential to develop a program that would facilitate understanding between people from different racial and ethnic backgrounds. In its early stages, the Black Student Program functioned as a social meeting place but also offered informational and educational programs. Its primary goal was to provide a place where Black students could feel comfortable, “a home away from home,” a place where Black students could share their experiences and receive support and resources.7 In 1979, the center was renamed the Era Bell Thompson Cultural Center to honor the former UND student. The center’s mission also expanded “to coordinate campus and Grand Forks community efforts towards eradication of discrimination through social and education programs, thus helping others to appreciate the diverse population represented at the Center.”8

The center's namesake, Era Bell Thompson, was born August 10, 1905, in Des Moines, Iowa, the youngest child and only daughter of Stewart and Mary Thompson, both descendants of former slaves. In 1914, the family moved to Driscoll, ND, to homestead.9 While Era Bell fell in love with the North Dakota prairie, she acknowledged that she often felt out of place in North Dakota not only because of being one of the few Black families in the state but also because most of their neighbors had never seen a Black person.10 After graduating high school in Bismarck in 1924, she enrolled at UND but had to interrupt her studies due to illness during her second year. While she returned in 1930, Era Bell Thompson graduated in 1933 from Morningside College, Iowa. She moved to Chicago where after various jobs and publishing her autobiography, American Daughter, she was hired by Ebony Magazine. She would eventually become a co-managing editor, as well as international editor and traveling and reporting from abroad. Era Bell continued to work for Ebony Magazine until her death on December 30, 1986.

While the Era Bell Thompson Multicultural Center changed names and locations over the past half-century and the former private home that housed it has been destroyed, the center remained true to its mission. In her interview for the “Black Women Oral History Project,” Era  Bell acknowledged that she did not know anything about Black history growing up and mainly accepted the position at Ebony Magazine to learn about her people.11 While Black students attending HWCUs during the 1960s felt they had to give up their Black identity to gain a college education, Era Bell Thompson’s experience four decades earlier was different in the sense that she had to leave a predominantly white community to learn about her history. At least Black students at UND in the 1970s could take courses on Black history and culture, even though white professors taught them. Today, her namesake center helps African American and other minority students to spread their histories and experiences to the HWCUs that UND is a part of. The Era Bell Thompson Multicultural Center seeks to provide African, Hispanic/Latino and Asian American students “an environment where [those] individuals can find a truer expression of self.”12 UND’s Black student population stands at 2.54% today.13 Because this remains a tiny percentage of the total UND student population, the Era Bell Thompson Multicultural Center is an important institution within UND to foster cultural understanding for all students, open communication between a somewhat diverse student body, and provide a place of support and community for non-white students attending HWCUs.

1. The Architecture of American Houses. Pop Chart Lab. May 4, 2018. https://www.popchartlab.com/products/the-architecture-of-american-houses.