Opened in 1924, Soldier Field is the oldest active stadium in the NFL. The stadium's name is intended to honor veterans of World War I, and was selected by voters after holding a contest to name the recently completed field. Numerous college and professional teams have used Soldier Field as their home turf, but after the Chicago Bears moved from playing games at Wrigley Field to Soldier Field in 1971, the stadium has been associated as the home of the Chicago Bears. 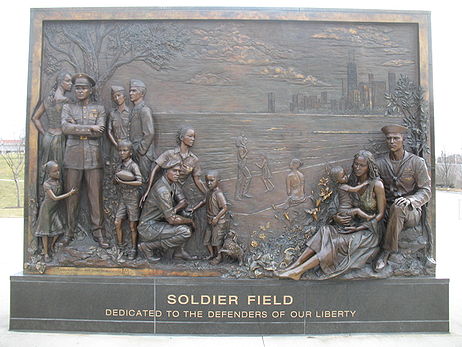 Originally a national landmark, the stadium's renovation in 2002-2003 for which modern amenities were provided, caused it to be removed from national landmark status. However, roman-style (Neoclassic) pillars and plaques adorn the outside that provide evidence of its historic legacy. Soldier Field originally opened in 1924 as 45,000-seat Municipal Grant Park Stadium. It was the first metropolitan-sponsored sports stadium and a sign of both the booming 1920s economy and a culture apt to spend money on leisurely activities, such as the theater, music events, and sports.1

The first football game played there occurred on November 24 when Notre Dame (South Bend, IN) defeated Northwestern University (Evanston, IL) 13 -6.  The name was changed to Soldiers' Field in 1926 as a tribute to World War I soldiers -- Army and Navy played a game on November 27 of that year to commemorate the event.2

Two games played later that decade rank among the most attended football games in National Collegiate Athletic history. The first one came when Notre Dame defeated the University of Southern California  7-6 on Nov. 26, 1927, in front of an estimated 123,000 fans (the Notre Dame's official athletic site, however, only 99,573 were listed as paid). The second game, played on October 13, 1928, was played in front of 120,000 (103,081 paid).3

The stadium has hosted numerous sporting and special events, but it is best known for existing as the home of the National Football League's Chicago Bears. After spending half of a century at Wrigley Field (now the historic home of the Chicago Cubs), the Bears moved to Solider Field in 1971.4

The Bears realized most of its sports success in the 1980s, with a world championship (Super Bowl) in 1985, numerous division championships, and the play of one its greatest players, Walter Payton, known as "Sweetness." In 1984, Payton broke the all-time rushing record (yard attained by running the ball) that had previously been set by the Cleveland Browns' Jim Brown in 1963. That record has since been surpassed by Emmitt Smith of the Dallas Cowboys, who broke Payton's record in 2002.

4 Most of this information arrives from various Chicago Bears official team outlets, such as media guides, the website, and sports sites related to the Chicago Bears. More can be seen at the official timeline: http://www.chicagobears.com/tradition/soldier-field-history/historical-timeline.html

Soldier Field is available for touring Monday through Friday, 9-5, with tours lasting about 1 hour and 45 minutes.