Since 1919, several dozen movies and television episodes have been filmed in Lone Pine, California. The nearby Alabama Hills have proven to be a popular backdrop for Westerns, like Brimstone and Have Gun Will Travel, and sci-fi movies, like Man Beast and The Arrival. In the 1980s, the town began the Lone Pine Film Festival to pay homage to its film history. Its success encouraged residents and local businesses to create the Lone Pine Film History Museum, now called the Museum of Western Film History, in 2006. Visitors can see costumes and props from movies shot in Lone Pine and learn about the Western genre as a whole.

The mural on the Museum of Western Film History building painted by John Knowlton. 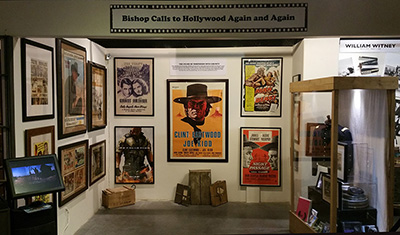 A restored 1928 Lincoln that was used as a "camera car" for decades. 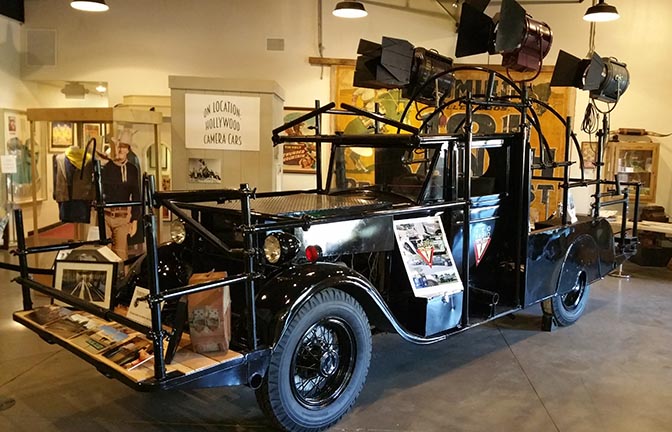 Lone Pine, California’s association with filmmaking began in 1919 with The Round Up starring comedian Fatty Arbuckle. As the 1920s came, so too did more and more Hollywood film crews into Lone Pine. Residents embraced these filmmakers who brought in new sources of revenue for the town. Some participated in filmings as extras or stuntmen, while some local businessmen and ranchers offered cattle and horses for the movies. One, Russ Spainhower, even built some Western-style sets on his ranch. Spainhower became the main liaison between Hollywood and Lone Pine, trying to provide for both parties. As the era of silent Westerns continued, famous actors like Tom Mix and Jack Hoxie practically became regulars around town. Hoxie, in fact, filmed more movies in Lone Pine than any other actor during the 1920s, over a dozen.

The town’s reputation in Hollywood grew in the 1930s and 1940s. At its peak, at least one film was being shot in Lone Pine per month. Warner Brothers even built a permanent Western town set for continual use. Though the scenic Alabama Hills brought many Western filmmakers to Lone Pine, they also brought in filmmakers of other genres. During the 1930s, the action films Gunga Din, set in India, and The Charge of the Light Brigade filmed their impressive battle scenes there among the hills. The dramas Only Angels Have Wings and Above Suspicion were also filmed in part in Lone Pine, proving that the area was good for more than Westerns. More recently, the region has been popular with science fiction films like Tremors and The Arrival. In 2008, the blockbuster Iron Man shot its scenes that take place in Afghanistan there.

Since the 1980s, Lone Pine has acknowledged its movie-making past by hosting a Western film festival, which features classic movie screenings, a parade, and a campfire “roundup.” The success of this festival inspired the community to build a museum dedicated to Western films in 2006. Residents Beverly and Jim Rogers contributed some of their personal collection to the museum. Such items on display include costumes worn by actors John Wayne and Errol Flynn, movie props, and posters. There are exhibits about the director William Wellman, war-hero-turned-actor Audie Murphy, and the character Hopalong Cassidy. There is also a gift shop and eighty-five-seat theater on-site. The Lone Pine Film History Museum has recently renamed itself the Museum of Western Film History. This new name reflects the broadening of its mission from educating people about Lone Pine’s film history to being “the only museum devoted to chronicling western film history and its impact on American culture.”

About Us - Where the Real West Becomes the Reel West. The Museum of Western Film History. . Accessed April 16, 2018. http://www.lonepinefilmhistorymuseum.org/ImageRotator/the-lone-pine-museum.