Early settlement of Atascadero is because of the real estate venture master planned by Edward Gardner Lewis. He laid out a “model community”referred to as the Colony with residential buildings in one area and a series of civic buildings planned for another area. The streets were laid out and completed in a curvilinear plan and two of the civic buildings were actually built. The Atascadero Printery, also known by other names the Review Building or the Atascadero Press, was one of E.G Lewis’ civic center buildings. It was being constructed alongside the Administration Building. It was built in 1915 and was the first building in E.G. Lewis’ civic center to be completed. The Printery shared common design elements to the Administration Building. 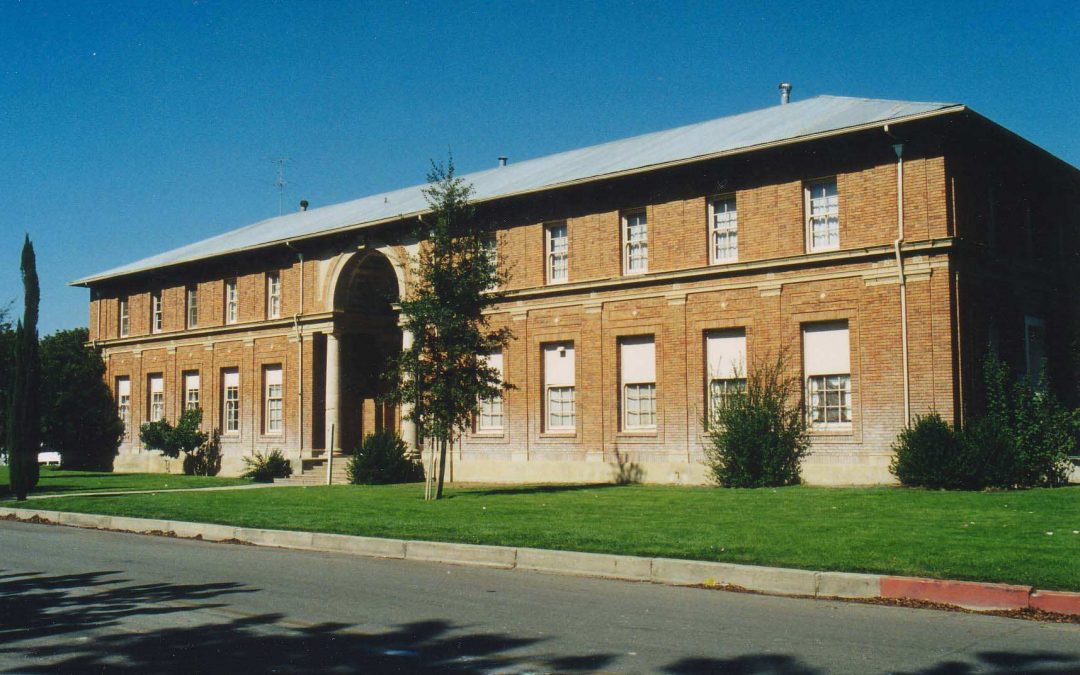 The building is located on the corner of Olmeda Avenue and West Mall in its original location. The site is located in close proximity to the Administration Building two blocks down Olmeda Avenue. Walter Danforth Bliss (1874-1956) was in the role of Commissioner of Architecture for the Atascadero Colony.  Bliss is also listed as the architect, builder on the Registration Form of the application for listing in the National Register of Historic Places for the Printery.

The Printery building is designed with an Italian Renaissance Revival style of architecture.  The large two-story rectangular building has a medium hipped roof. The centrally-placed main entrance is in the south side and is dominated by a Roman arch supported on two simple Doric columnns.  The arch is ornamented with elaborate terra cotta. The recessed doorway is accessed by a short flight of steps. A prominent terra cotta belt course divides the upper and lower stories. The windows are separated by brick pilasters with simple terracotta capitals. The foundation is concrete and the roof is asphalt according to the National Register Registration Form written about this structure.

An adjoining single-story hip roofed annex building was added for extra space at the rear in 1917 that contained the bindery and stock room.  Additionally, at the rear of the 1917 annex is a non-historic addition made of concrete and clad on one elevation in wood siding. The Printery was served directly by a spur of the Southern Pacific railroad that accommodated the large volume of incoming newsprint and outgoing products.  Elaborate murals of local scenery are located in the Printery building lobby and depict stylized oak trees on a pastel background. They were in place by 1919 and were painted by Ralph William Holmes.

The Printery was used to print the original Atascadero News which was the only means of information available within the Colony. The first issue of the Atascadero News was published in January of 1916. The building was advertised as being fireproof and full of the most modern printing equipment available at the time.  It was described as being “the finest printing press west of the Mississippi River”. The building is now privately owned by the Atascadero Printery Foundation and is currently not open to the public.

In 1928 - 1933 Frank Moran purchased the Printery for use as the California Campus for Moran Prep and Junior College.  It then became Miramonte followed by Amerivet Academy. In 1950, the Masonic organization purchased the building. After the San Simeon earthquake in 2003, the building’s structure was at risk and became a property of the city of Atascadero because of back taxes owed.  The building itself, was bought at auction in 2017 by the Atascadero Printery Foundation, who has hopes of renovating the building.

Edward Gardner Lewis purchased 23,000 acres of rolling hills from J.H. Henry in the Spring of 1913.  The Atascadero Colony was created by Lewis who formed the Colony Holding Corporation to take care of promoting the Atascadero enterprise.  It was referred to as a “dream city”. His motto was, “all the advantages of country life with city conveniences”. The Atascadero Printery was the first civic building completed in 1915. The original cost of the brick building was $34,000.

The Atascadero News and later, the Illustrated Review were both printed in this building.  The Printery’s early completion was because it produced income and helped to finance the operations of the community from the sale and distribution of the newspaper, thus ultimately funding the Colony Holding Corporation ventures.