Barbour County Courthouse was completed between 1903 and 1905. 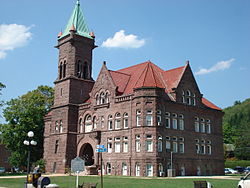 The present courthouse building replaced the original courthouse, a wood-frame Greek Revival structure built in 1843 which had been used to house Union troops during the American Civil War. J. Charles Fulton of Uniontown, Pennsylvania was contracted in 1901 and designed the building in the Richardsonian Romanesque style. The structure was added to the National Register of Historic Places in 1980.

A restoration effort began in 1995 and included the repair and replacement of the stained glass interior dome. This project was named Best Interior Rehabilitation Project in 1999 by the Main Street Project of the West Virginia Development Office.