A small town with a booming mining industry in the late 1800s led Colliers, West Virginia to be favorable boxing location. Boxing was immensely popular during this time period, but wasn't legal in certain states, like Pennsylvania and West Virginia, but because of its proximity to state lines, it was easy to avoid law enforcement. The town would host many boxing matches, but two major title fights, the 1873 Lightweight Championship and the 1880 World Heavyweight Championship. 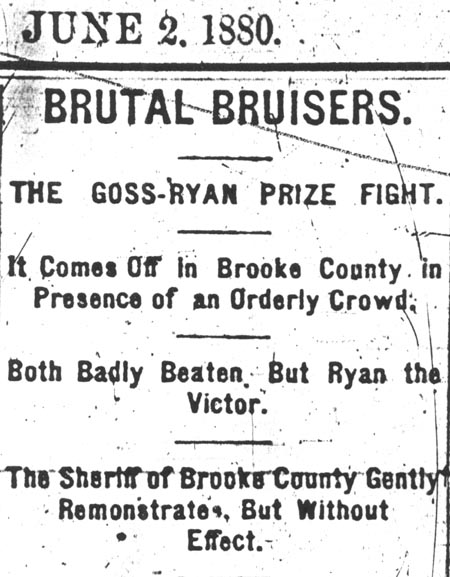 Colliers, West Virginia was an extremely popular town for boxing matches in the late 1800s for a number of reasons. The first being that it was home to a major mining industry, which meant that trains ran from all over through the town. This meant that people could easily get to that town since trains from all directions would come from there to get coal and water. The town's location wasn't just good for train rides though, but also for making fights possible. Boxing was illegal in many states, Pennsylvania and West Virginia included, so it wasn't easy to set up fights. But since the train station was so close to the border of both Pennsylvania and West Virginia, it was easy for fighters to jump across state lines when law enforcement showed up to avoid trouble.
There were two major bare knuckle fights that took place at Collier's Station, the first was the 1873 Lightweight Championship between Harry Hicken and Bryan Campbell. The fight was rough before and after it began. Both sides had a hard to agreeing to a referee, which delayed the fight and caused the crowd to get rather rowdy as they threatened to cut the rings ropes. The fight would last for 24 rounds when both fighters fell down, and both sides start crying for fowls. A fight erupts from both sides corners, which ends up dragging the crowd into the fight and a running fight takes place. The fight is given a winner, but Hicken would be declared the winner soon after.
The second major fight took place in 1880 and was the World Heavyweight Championship between Paddy Ryan and Joe Goss. This fight didn't turn into a full brawl like the previous title match held at Collier's Station, but it was an impressive fight to say the least. The fight lasted for an outstanding, and terribly long for the fighters, 87 rounds. Ryan, over the course of those 87 rounds, had taken an incredible beating from Goss, especially to the head. It was stated that his entire body was covered in bruises from Goss's fist. Despite all of that though, Ryan would go on to win the match because of Goss's age, which caused him to not be able to continue after the 87th round. Goss would get his revenge though when Ryan would fight John Sullivan later to defend his championship, which he would lose to Sullivan.