Huntsville is called the “Prison Capital of Texas” and with seven prisons in the surrounding area it is easy to see why. However, there is one prison that stands apart from the rest. The Huntsville Unit, also known as “The Walls Unit”, is the oldest state prison in Texas. It is more famously known as the location where executions are carried out for convicted criminals who sit on death row. With fifteen foot high red brick walls, numerous “pickets” (watch towers), and even an old steam whistle that blows to signal that all prisoners are accounted for, the Huntsville Unit provides a peek into prison history and how things used to be.

Main entrance to the Huntsville Unit 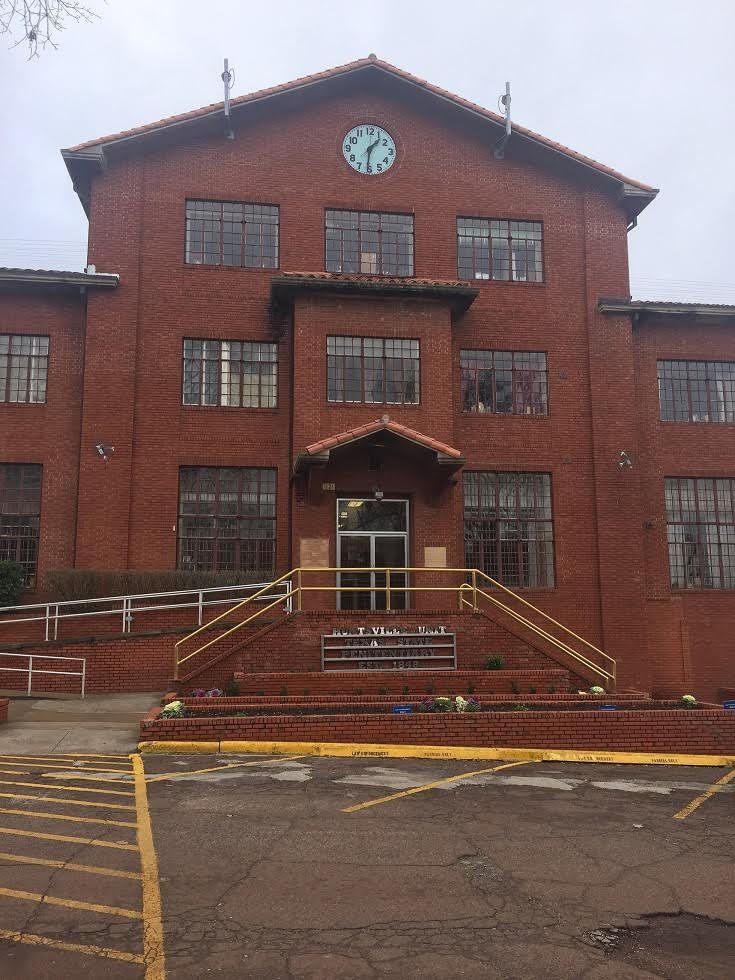 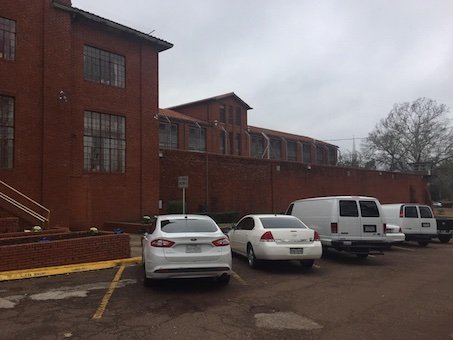 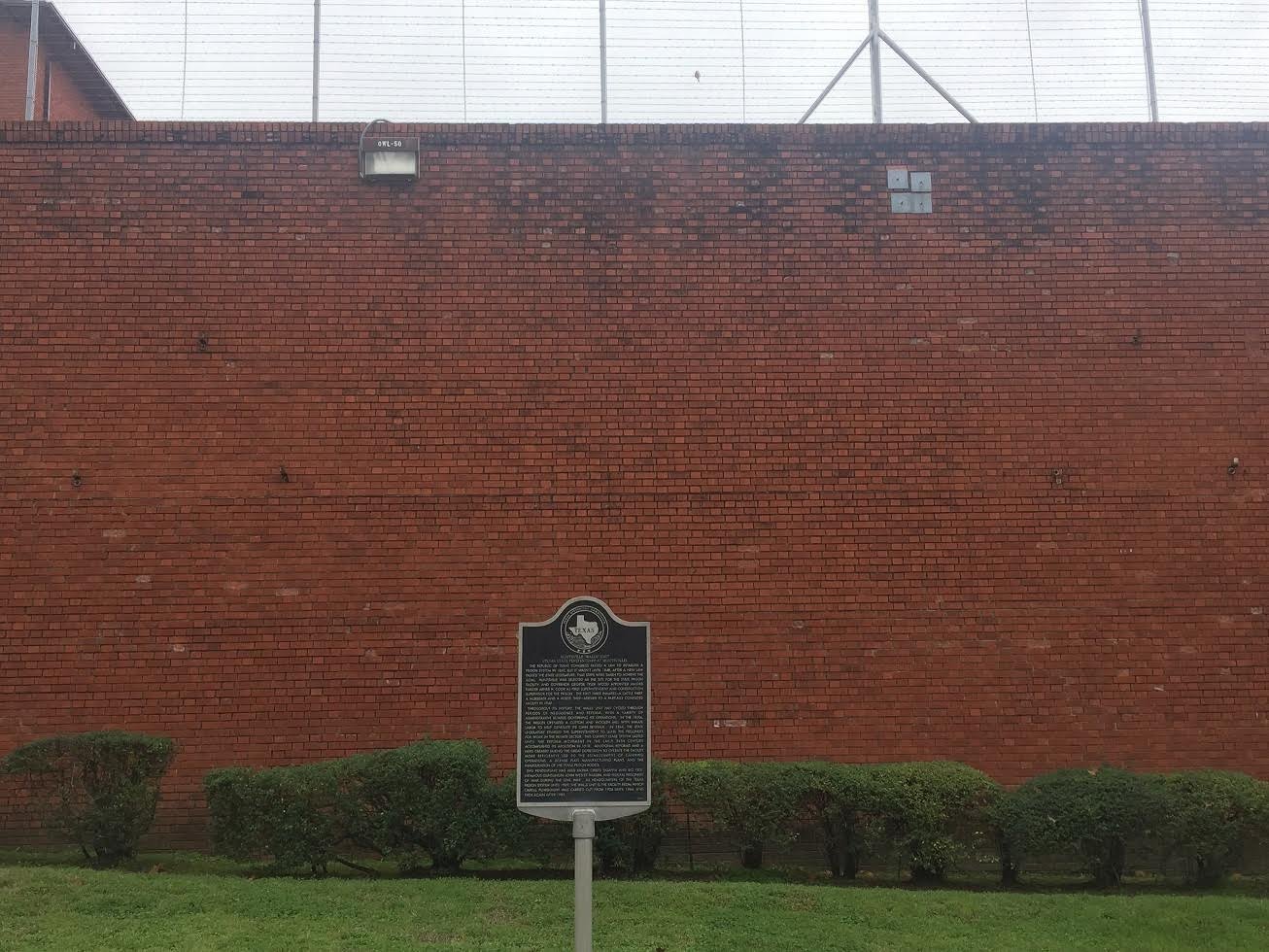 The Huntsville Unit has been at the center of the Texas Prison System since its inception in 1848. It was on March 13 of that same year that the Texas Legislature passed a bill requiring the construction of a state prison. The Governor, George Wood, appointed John Brown, William Palmer, and William Menefee to oversee the operation. Huntsville was the location chosen for the prison and construction began in late 1848. On October 1, 1849, the first prisoners arrived at the Huntsville Unit but they had to be housed in a temporary jail, because the construction of the prison was not complete.

After completion, state funding for the prison dwindled and officials looked for another way of paying for the prisons expenditures. Cotton mills and farms were set up so that prisoners could work and produce goods that were later sold for profit. This was believed to be a great idea because the prisoners developed new skills and learned discipline and responsibility all the while creating revenue to help pay for the prison’s operations.

The Huntsville Unit was also a valuable asset during the Civil War. It not only housed Union prisoners, but also supplied well needed clothes and fabric to the Confederate Army. By the end of the war, however things were about to change for the Huntsville Unit as reformation for both the southern states and the Texas prison system took place.

After the war Texas government was broke and lawlessness ran rampant in the state. As the prison population increased a new method of leasing off inmates to work on private farms was formed. This helped pay for expenses and the new prisoners were also put to work making new improvements to the prison facilities. A hospital, library, and a chapel were built along with new cell blocks and a warehouse. The outside wall was also extended outward and renovations were made to existing structures. This created a much better living environment for the prisoners and made the psychological stress of imprisonment a little easier to cope with. From 1878 to 1891 prison superintendent Thomas J. Goree, which another prison unit in Huntsville was named after, took things further by offering weekly worship and Bible studies along with educational classes to improve prisoner’s morale and behavior.

In 1924 the state of Texas took control of the executions of convicted criminals and the electric chair was introduced as the method of execution. On February 8th of that same year the first five inmates were executed using the electric chair. In total from 1924 to 1964, three hundred sixty one prisoners were executed at the Huntsville Unit by means of electric chair.1 The chair itself gained a reputation and was nicknamed “Old Sparky” for obvious reasons. The same electric chair is currently on display at the Texas Prison Museum, also located in Huntsville. In 1964 executions ceased nationwide as they were deemed unconstitutional and cruel by the Supreme Court. However, by 1973 Texas created a new standardized assessment of how the death penalty was to be used. This allowed executions to resume in Texas with the new method of execution being lethal injection. During this time death row was moved from the Huntsville Unit to the nearby Ellis Unit. The execution chamber still remained at the Huntsville Unit where executions continue to be carried out to this day.

A first for the Texas prison system was developed during the Great Depression era. In 1931 the Texas prison rodeo was instituted at the Huntsville Unit. At first this was a small form of recreation for the prisoners with little “free world” involvement. As time went on however, the Prison Rodeo grew dramatically in size and popularity and inmates were allowed to earn cash prizes if they won an event.  The money they won was deposited into their commissary accounts, whereby they could purchase personal hygiene items and food items. This practice definitely boosted morale and provided a sense of accomplishment. The outside world also drew interest in the activities as many came to watch the rodeo. Soon admission was charged and the rodeo began to bring in revenue for the prison. In its last year of operation (1986) the Rodeo had nearly 50,000 spectators that brought in 450,000 dollars.2 Sadly in that same year the stadium was deemed structurally unsafe, thus ending the Texas Prison Rodeo for good.

In 1946 the newly elected Governor, Beauford H. Jester, promised to change prison management. Tennessee prison director Oscar Byron Ellis was brought in to oversee this new reforms in prison operations. New equipment, technology and facility improvements were made to bring the prison up to date. New techniques in management and bookkeeping skills were also implemented to improve efficiency. A more reliable accountability system was set in place as well as salaries for employees.

Throughout the 1960’s and 70’s reforms continued to take place in the Texas Prison system in the form of more educational opportunities for inmates and better administrative facilities and programs. In the 1980’s the Huntsville Unit and other prisons within the Texas Prison system saw the most extreme reform of all as the U.S. District Court ruled in favor of the plaintiff David Ruiz in the Ruiz v. Estelle court case. Ruiz said in his class action lawsuit that the prisons were overcrowded, inmates had insufficient security and healthcare, unsafe working conditions, and punishments were too severe. The Judge overseeing the case (William Wayne Justice) mandated that the state take action to correct these problems and in doing so changed the Texas prison system forever!

170 years after its inception, the “Walls Unit” in Huntsville,Texas continues to serve an important role in the Texas Prison System. Without this Unit the prison system would not be where it is today. The numerous developments that took place at the Huntsville Unit such as improved prison management, prison reform, and programs that helped boost inmate morale along with providing opportunities to better their education and skills would prove to be crucial in the creation of a more efficient and successful statewide prison system. The Huntsville Unit also serves as a constant reminder of where the Texas Justice System originated, as well as the historic location where executions still signify that there are horrendous consequences for heinous actions.