On July 27, 1996, the Summer Olympics, a major international sporting event, made an unforgettable and tragic mark in history. After discovering a 40 pound pipe bomb filled with nails and screws, Richard Jewell notified police immediately. However, it was too late. The bomb exploded, killing two and injuring over one hundred. For the next several months this would become a national sensation with people waiting to see whether or not Richard Jewell would be prosecuted for the crime or if he was falsely accused.

This is one of the many sculptures located in the park. It was located near the site of the bombing, as evidenced by the imprint of a screw in the closeup shot on the right side of the picture. 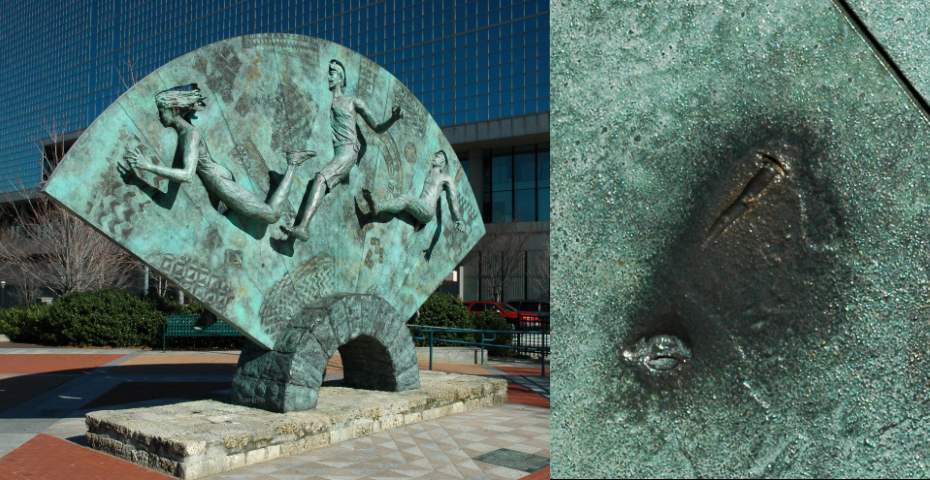 On July 27, 1996, the XXVI Summer Olympics, held at the Centennial Olympic Park in Atlanta, Georgia, were underway when an anonymous 911 call was made forewarning there was a bomb in the building, and only thirty minutes to find it. The XXVI Summer Olympics still continued. Security guard Richard Jewell found the 40 pound pipe bomb before it detonated. He immediately called in the police after discovering the bomb and started the evacuation process of the part of the building he found the bomb in. The evacuation process was underway when the bomb went off. The pipe bomb, filled with nails and screws, killed two people, and injured over a hundred.

On July 30, the park was reopened, but the bombing remained in headlines. Richard Jewell was shortly deemed a hero for his actions when he found the backpack that held the bomb. If he hadn't acted when he did more people could have died. However, later, mainly due to media hype, he was accused of the crime himself. The anonymous call stated "There is a bomb in Centennial Park. You have 30 minutes."(1) The FBI discovered that the phone call had been made from a payphone near the park. The bombing ended up being one of three linked terrorist attacks, and Jewell was cleared of all charges nearly three months later.

The real culprit of the bombing was Eric Rudolph, who was an anti-abortion fanatic who wanted his voice heard through acts of terror. He was named prime suspect on Febrary 2, 1998 and was charged later that year, in October. Rudolph remained elusive to authorities for several years. He was eventually caught in 2003, pled guilty to three bombings, including the one at the Olympics and an abortion clinic, and sentenced to four consecutive life sentences without parole for these terrible acts.