This state park includes historical markers that share the history of the Battle of Newtown which occurred at this location in August 1779. This was the only major battle of the Sullivan Expedition, an offensive led by General John Sullivan and ordered by the Continental Congress to reduce the threat posed by Iroquois tribes who had formed an alliance with the British in the American Revolutionary War. In the battle, the Iroquois were defeated decisively. The present day battlefield is heavily wooded and difficult to see from the highway, but a narrow columnn of white granite known as the Newton Battlefield Monument can be seen atop the hill where battle occurred. The battlefield serves as a reminder of the way that Native American tribes shaped decisions by American and British forces owing to economic, military, and diplomatic alliances that shifted througout the war. The battlefield became a National Historic Landmark in 1965. 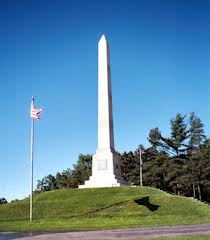 In August of 1779, the tranquility of this forested hill was broken by the booming of cannons, the crack of musket fire, and the yells of Haudenosaunee warriors. The Continental Army was engaged in battle with the British regulars, Loyalist rangers, and 1000 Native American warriors. The Battle of Newtown was a decisive victory for American forces in one of the largest offensive campaigns beyond the coastline and major cities during the American Revolution. This battle was part of the Sullivan-Clinton Campaign, an offensive authorized by the Continental Congress in hopes of isolating and punishing the tribes among the Six Nations of the Iroquois Confederacy who had sided with the British in the war.

A stone monument was dedicated at the top of the hill on August 29, 1879, the centennial of the Battle of Newtown. The present granite monument was erected in 1912. During the 1930s, Civilian Conservation Corps crews built and developed many of the present facilities of the park, including a beautiful, rustic lodge. In 1973, Newtown Battlefield Reservation was designated as a historic landmark and placed on the National Register of Historic Places.

The area which is now Newtown Battlefield Reservation State Park was the site of the battle of Newtown, which occurred in August of 1779 and was the decisive clash in one of the largest offensive campaigns of the American Revolution. This expedition, known as the Sullivan-Clinton Campaign, had been regarded as punishment to several tribes among the Six Nations of the Iroquois Confederacy who had sided with the British in the war and had attacked frontier settlements. In 1973, Newtown Battlefield Reservation was designated as a historic landmark and placed on the National Register of Historic Places.