The Grammer House represents one of many homes in the neighborhood that exemplify both historical and architectural significance. Like many of these homes, they had owners of regional, state, and even national importance. This one, however, has all of these in its line of succession. Indeed, the stories of the owners preempts much of the attention in comparison to the architectural elements.

Image courtesy of Virginia Landmarks Commission on record with the City of Petersburg Department of Planning and Community Development, 1974. 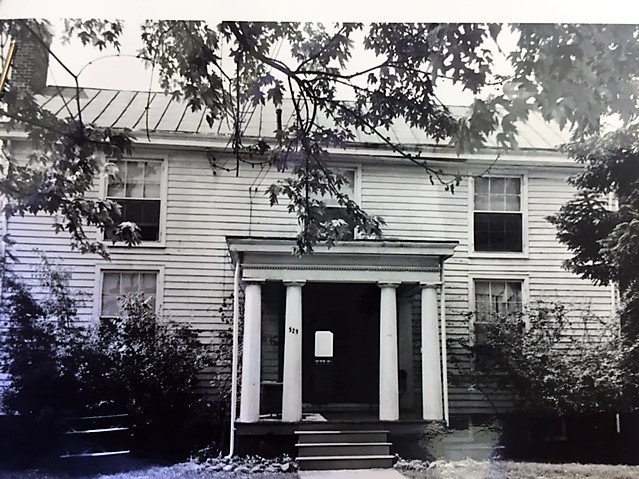 In the late 18th century, John Grammer had a home built at 529 High Street. This land was granted to him by the Commonwealth of Virginia in 1781 while Thomas Jefferson served as governor. It was land that had been confiscated during the American Revolution. Grammer resided there until his death in 1835. Earlier in his career, he raised a company of volunteers during the American Revolution. Once his officer’s commission was received, he served under Lafayette. As a lawyer, he was among the first to be appointed to the Common Council upon Petersburg’s incorporation in 1784. He served as the Clerk of Court in Petersburg and served as postmaster for many years as well. Given his role as an Episcopal layman, he actively supported those efforts and held prayer meetings on his property. One of his most important acquisitions was the purchase of Blandford Church, one of the oldest buildings in the city, was deeded to Petersburg. Upon his death, many remembered him for his virtue and contributions. Though he was often associated with Federalist beliefs, most respected his honesty and charity.

After Grammer’s death, the property was rented by Edmund Ruffin for six years. Ruffin was an active citizen in the town, operating a publishing business and also conducting agricultural studies. Those activities garnered the attention of the Governor of South Carolina, who made him the Agricultural Surveyor for the state. Ruffin is most famous for his role in launching the first shot on Fort Sumter in Charleston Harbor in 1861. In the years following, the property was involved in different financial difficulties and the deeds reflect activity in ownership and parcels sold off in parts to creditors. By 1900, the remaining property was auctioned, resulting in the acquisition of the lot by W. H. Mann. In the years since, it has continued to change hands.

Initially a Colonial design, the home was remodeled into the Greek Revival style. The two-story weatherboard home had original windows at the time of the 1974 inventory by the Virginia Landmarks Commission. The porch was an addition, and doors have been replaced on multiple occasions. The wing to rear of the house appears to be the oldest section. Work to rehabilitate the property picked up momentum in recent decades, and much work has been done to preserve the structure.