The Treaty of Camp Charlotte ended Lord Dunmore’s War under the conditions that the Shawnee would abandon their land south and east of the Ohio River and no longer attack British settlers traveling along the river. The war had started after the colonists moved onto land that the Iroquois ceded in 1768 but the Shawnee and Seneca-Cayuga still had the right to. A series of clashes turned into a war, ending after the Battle of Point Pleasant and the burning of several Shawnee villages. The treaty helped to ensure that peace remained among the Native Americans and settlers living around the Ohio River until around the American Revolution.

A close-up of the historical marker 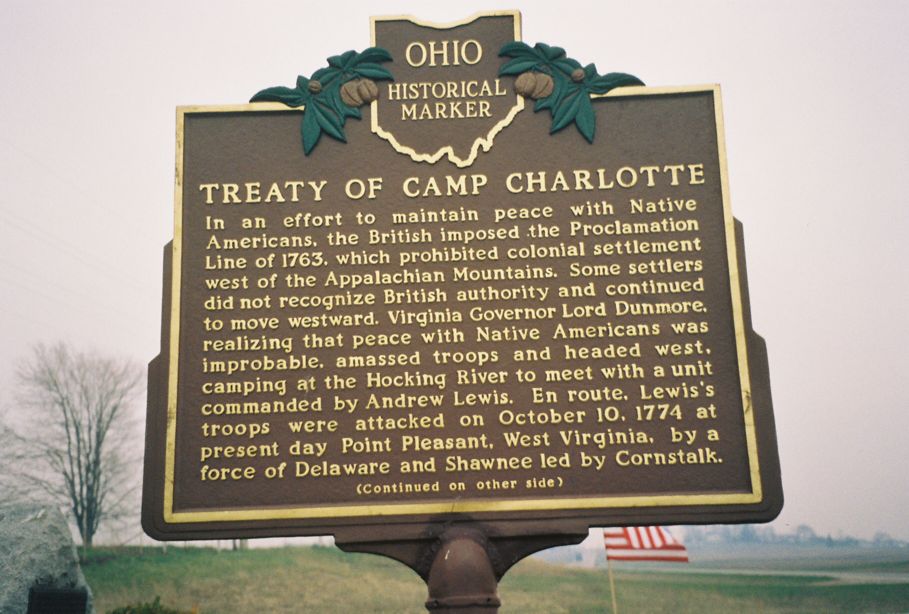 In 1768, the Iroquois gave all of their lands east and south of the Ohio River to the British with the Treaty of Fort Stanwix. However, other Native Americans in Ohio, such as the Seneca-Cayuga (also known as the Mingo) and Shawnee, did not agree to cede their land. Just the same, white settlers came to the area, leading to a series of violent clashes. On May 3, 1774, the British colonists killed eleven Seneca-Cayuga, including at least two relatives of Chief Logan. Many of the Seneca-Cayuga and the Shawnee did not want to seek vengeance, as many of the British in the area were innocent in this situation. But, Chief Logan and about twenty-four warriors killed thirteen colonists, causing the British to prepare for a full-out war. Lord Dunmore, the royal governor of Virginia, placed militiamen in modern-day West Virginia and Kentucky to keep the lands open for white settlement.

While Virginia militiamen entered Ohio and destroyed seven Cayuga villages in August 1774, one-thousand British men built a fort near the Kanawha River. The Shawnee Chief Cornstalk, who had previously hoped for a peaceful compromise, now sent nearly one-thousand warriors to drive out Dunmore’s forces. This culminated in the Battle of Point Pleasant on October 10, 1774. Dunmore’s men forced the Shawnee back into central Ohio, near what is now Circleville. He then sent for Shawnee leaders so they could draw up a peace treaty at his Camp Charlotte. While discussing the terms, a detachment of Dunmore’s militia, led by Colonel Andrew Lewis, destroyed several Shawnee villages around Point Pleasant. To prevent more bloodshed, some of the Shawnee agreed to stay north of the Ohio River and not to attack any travelers on the river. The Treaty of Camp Charlotte ended Lord Dunmore’s War and led to a peace that lasted until the American Revolution.