This historical marker shares the history of an event that occurred in September 1812 when American troops in the War of 1812 were ambushed on a supply mission. Although the war was between the United States and Great Britain, Native American tribes often held and controlled land in the continental interior, and alliances with those tribes often turned the balance of power towards one of the two sides. During this conflict, Sergeant Nathan Fairbanks and his forces were escorting supplies from Fort Knox to Fort Harrison in Terre Haute when the American military force was ambushed by Native Americans. Sentiment for the American soldiers who were routed in the resulting massacre led to this community being named in honor of Fairbanks.

The Fairbanks' Massacre describing the events that took place. 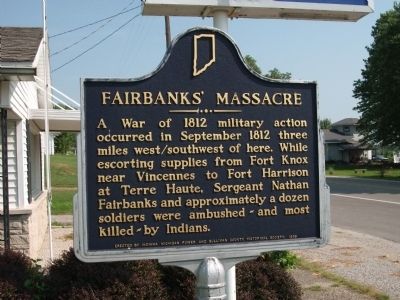 A drawing of what Fort Knox looked like during the War of 1812. 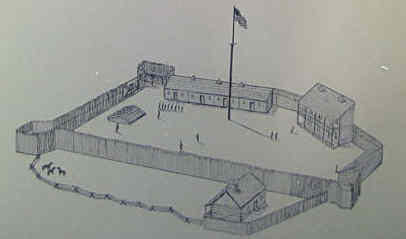 On September 12, 1812, Sergeant Nathan Fairbanks was leading around 12 men to Fort Harrison with a supply wagon from Fort Knox. The Native Americans witnessed the small group leaving Fort Knox and took off ahead hiding until nightfall for the ambush. The Native Americans fired upon the wagon when it made its descent down the hill the Native Americans were hidden at. By taking the convoy by such surprise, most of the men were killed during the battle. Some reports say that Fairbanks was wounded immediately, but continued to fight until the end with his sword. The rest of the men did not put up much of a fight with it being at nightfall and with so much surprise and confusion.

This battle took place during the War of 1812 where the United States would battle the forces of Great Britain. This war was known for having Native American tribes fighting on both sides which this massacre is an example of. The War of 1812 happened, because of growing controversies related to the trade and economic disputes between America, Britain, and France. Each of these disputes had been growing and escalating since the years of the Napoleonic Wars. The war officially ended with the signing and the passage of the Treaty of Ghent on February 16, 1815.

The two men who survived the ordeal were the driver of the wagon, John Black, and Private Edward Perdue. John Black ran and hid until the Native Americans quit looking for surviving soldiers and left the premises. Private Perdue was wounded in several places on his body, but managed to escape back to Fort Knox. More battles would be waged during the three-year tenure of the War of 1812 where the United States would win more battles and General Andrew Jackson would be a prominent figure after the war winning the 1828 presidential election. He would be responsible for signing the Indian Removal Act of 1830, which removed many Indian tribes from their homes and sent them on the Trail of Tears. The town of Fairbanks, Indiana got their name from this massacre.