Through out the history of the United States Military, there have been many acknowledged and justified heroes. As time passes, the species in which these heroes present themselves has taken a whole new form. Recently, the use of the Military service dogs has increased along with the recognition of the sacrifice made by them. Today, the "Military Working Dog Teams National Monument" located on Lackland Air Force Base in San Antonio, Texas honors those soldiers and their K9 companions that have selflessly served the United States military in both combat and non combat capacities. The monument was designed and constructed by the "John C. Burnam foundation. 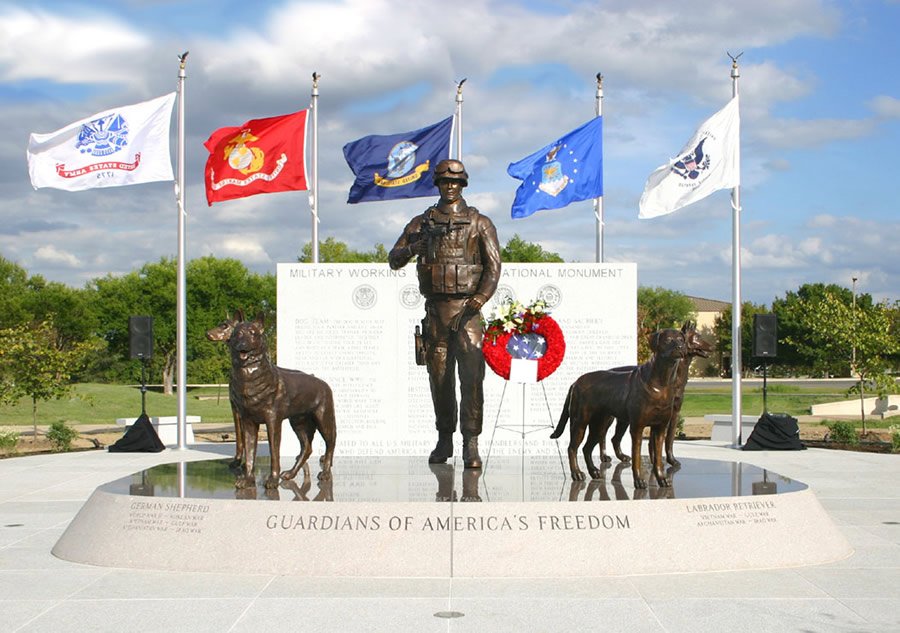 Photo dedicated to all dogs that served in the military; photo taken is of veteran John Burnam with one of his service dogs during the Vietnam War. (Known as the Not Forgotten Fountain) 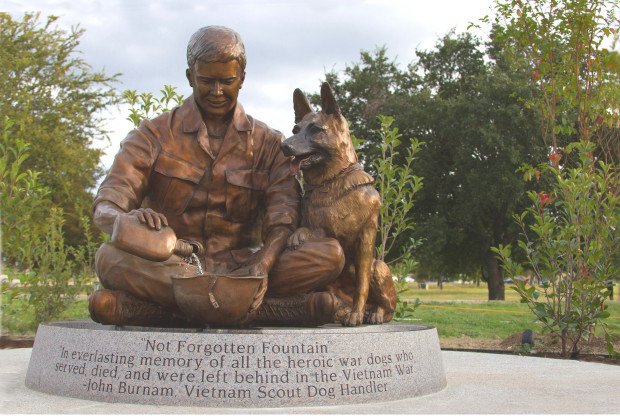 After returning home from active combat in the Vietnam War, John Burnam would make it his mission to create something that paid homage to the Military Working Dog Teams that have served.  Burnam, a Vietnam veteran and experienced military dog handler himself, would then create the "John Burnam Monument Foundation" that would be the main force behind constructing the "Military Working Dog Teams National Monument".  After being denied space to place the monument in Washington D.C., the foundation decided to proceed with plans to locate the monument at Lackland Air Force Base in San Antonio, Texas.  In 2014, Burnam's aspiration would come true and the Military Working Dog Teams National Monument was open to the public.  The 2 million dollar monument now stands as a reminder to those dogs and their handlers that proudly served the U.S..

The Military Working Dog Teams monument pays tribute to all military service dogs and their handlers through a series of bronze statues erected at the site.  The statues represent a modern dressed soldier, as well as 4 seperate statues of dogs.  The dog statue's are unique because each one represents a different breed of commonly used dog types within the military (Doberman Pinscher, German Sheppard, Malinois, and Labrador retriever).  The monument also features an attraction known as the "Not Forgotten Fountain" which is a statue/fountain that depicts the strong relationship between the dog handlers and their K-9 partners through the architecture.  The fountain is dedicated to all of the dogs who served or were killed during the Vietnam War.

The location of which the Military Working Dog Teams monument resides is also very significant in the history of their service.  Lackland Air Force base has a long standing, rich tradtition of training highly qualified service dogs and handlers for military service.  This program has been active since 1958.  Lackland Air Force base also hosts the only military hospital that is specifically designed to treat dogs in the entire military.  This information just adds to the authenticity and genuine honor that the Military Service Dog Teams monument provides to all armed forces service dogs and their handlers throughout the history of the military.