Marks' Mills Battleground State Park commemorates a racially-charged battle that took place there on April 25, 1864. The Battle of Marks' Mills was one of three Civil War battles in the state of Arkansas as part of the larger Red River Campaign led by the Union Army. They were an attempt to gain control over Louisiana, Arkansas, and Texas, large cotton-production states that amassed a large quantity of the material after New Orleans was captured in 1862 and they began storing it with hopes of selling it to Europe at a markup later on. After the Union loss here, Union General Frederick Steele started to plan his retreat to Little Rock, eyeing Jenkins' Ferry as his escape route. The historic site for this battle is located at the junction of Highways 97 and 8.

Marks' Mills Battleground State Park commemorates the second battle of the Red River Campaign in Arkansas during the Civil War in 1864. 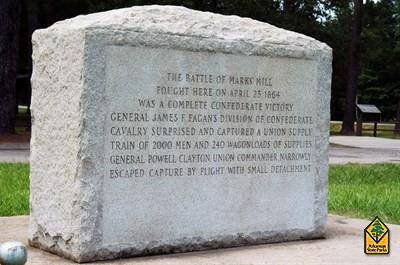 After the Union's loss at Marks' Mills, General Steele and his men chose to plan a retreat to Little Rock. 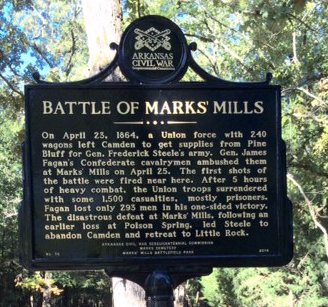 The battle took place on a sawmill and flour mill first founded by John H. Marks in 1834. 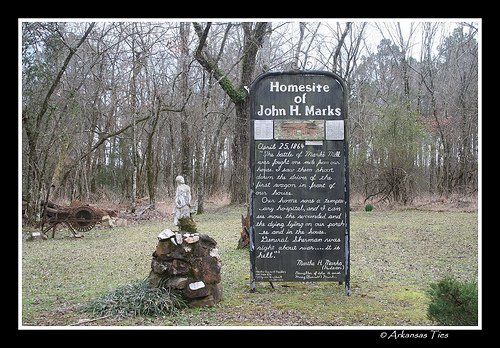 The site of the battle was founded as a sawmill and flour mill in 1834 by John H. Marks in present day Cleveland County in southern Arkansas and occurred at the homesite along the Camden-Pine Bluff Road on April 25, 1864. Still in operation during the Civil War, the mill was a landmark for both Union and Confederate soldiers. Led by Union General Frederick Steele, the Battle at Marks’ Mills was part of the Steele’s Camden Expedition, and the second of three Civil War battles that took place in the state of Arkansas as part of the Union’s much larger Red River Campaign, the other two being the Battle of Poison Springs and the Battle at Jenkins’ Ferry. The Red River Campaign battles began with Union General Nathaniel Banks as an attempt by the Union to seize vital cotton-growing states: Louisiana, Arkansas, and Texas. Banks sent a fleet commanded by Admiral David Dixon Porter up the Red River, where they took Fort DeRussy in Alexandria, Louisiana, but were later defeated by Confederate General Richard Taylor near Mansfield on April 8 and withdrew their Union troops.

At Marks’ Mills, General Steele led about 14,000 soldiers out of Little Rock with the intent of meeting Banks’s troops in Louisiana to join the Red River Campaign and overtake Texas. Steele seized Camden in Ouachita County on April 15, but were low on supplies and facing the threat of Confederate action. On April 20, Steele received a shipment of food from Pine Bluff in Jefferson County. With word of an approaching Confederate Army, Steele sent Lieutenant Colonel Francis Drake for more supplies. He was dispatched with over 1,200 soldiers, 240 wagons, and several pieces of artillery. They were soon joined by around 300 Black civilians and an unknown number of white civilians for protection, then cavalrymen from Pine Bluff.

However, Union troops were soon met with an ambush at the juncture of the Camden-Pine Bluff by Confederate General James F. Fagan, joined by General Joe Shelby and General William L. Cabell. During the five-hour battle, Union troops made some headway against Cabell’s division, but were ultimately overwhelmed by the number of Confederate soldiers. Around 1,500 Union soldiers were killed, compared to 293 Confederate casualties. Those soldiers, however, were not the only casualties. The Confederate Army is accused of slaughtering African Americans at the battle. This further angered Union troops. It is believed Confederates captured around 150 Black freedmen and killed over 100 more.

After the defeat at Poison Spring and Drake’s command, Steele could no longer hold his position. With word of General Edmund Kirby Smith’s command moving from Louisiana, the Union Army abandoned Camden and retreated to Little Rock. This ultimately led to the Battle at Jenkins’ Ferry. Coupled with the number of Black freedmen killed at Marks’ Mills, the First Kansas Colored Infantry Regiment wanted revenge against Confederate soldiers at Jenkins’ Ferry, creating a legacy of racial atrocities within the Camden Expedition.

In 1961, Act 164 by the Arkansas General Assembly created Marks’ Mills Battleground State Park. The 6.2-acre park is maintained by the Arkansas Department of Parks and Tourism and is one of three parks of the Camden Expedition. It is also site of a Red River Campaign National Historic Landmark. It lies at the junction of Arkansas Highways 8 and 97.