In May of 1865, Union soldiers brought to the bloodiest war in American history to a close with the military defeat of the Confederate States of America. Jefferson Davis initially ordered his troops to continue the fight for generations regardless of the cost and impossibility of victory. Jefferson fled when General Robert E. Lee surrendered his army and hoped to rally men to continue the fight when he was captured by Union troops near this location in Fitzgerald, Georgia. Many expected Davis to be executed for leading a war against the United States, but he was released after a short prison term and spent the rest of his life working to resuscitate his reputation. Despised by many Southerners during and immediately after the war because they believed that Davis had violated the promise of limited central government or simply mismanaged the Richmond government and Confederate war effort, Davis succeeded in convincing most white Southerners that the defeat of the Confederacy was inevitable but their cause was righteous. This change in Davis' historical memory is demonstrated by the erection of this 1939 memorial and many other monuments by the Sons of Confederate Veterans and the United Daughters of the Confederacy, two organizations of white Southerners who hoped to erase the connection between secession and slavery while vindicating the antebellum South and their war against the United States.

Mounment erected in 1939 at the exact spot that Jefferson Davis was captured. 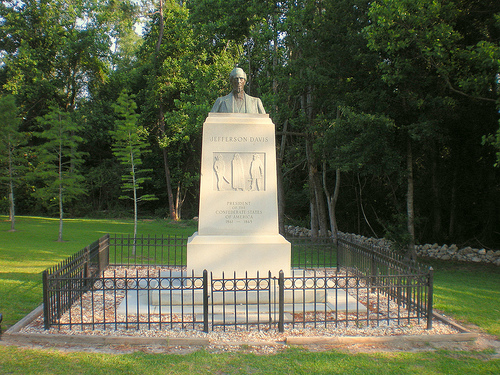 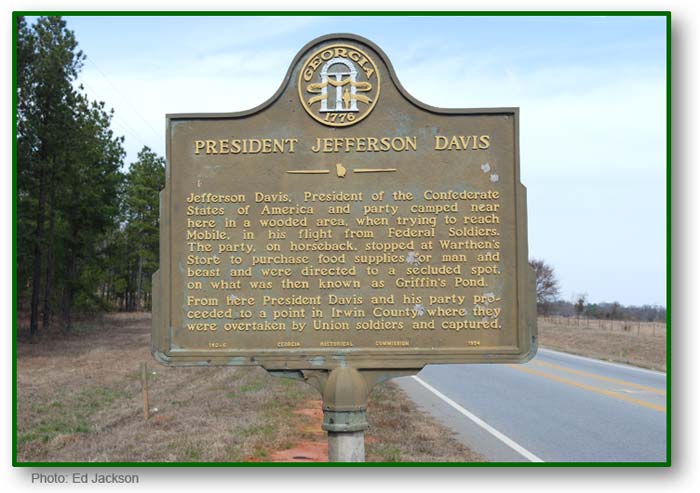 Although the famous scene of Robert E. Lee surrendering to General Grant at Appomattox Courthouse in Virginia is symbolic of the end of the American Civil War, the true ending may have occurred here in Fitzgerald Georgia with the capture of Jefferson Davis on May 9th, 1865. With the government of the Confederacy in a disarray after Lee's surrender, but with Davis initially promising that the war would be carried on for generations if needed, the capture of Jefferson Davis and a few of his trusted advisers was more than a symbolic end of the war.

Fearful of the personal consequence of surrender, Davis hoped to head west and collect men to continue the fight. Before he could achieve this, a small group of Union troops captured Davis and his advisers near this location. Davis served two years in prison where his physical and psychological health suffered before his release after the prosecution stopped pursuing the charge of treason.

The site where Jefferson Davis was captured includes a monument created in 1939 that is believed to be the exact location where he was captured. In that same year, a museum was constructed on the thirteen acres that surrounds the monument. This museum was funded by taxpayer dollars as part of the Work Progress Administration projects that were completed during the Roosevelt presidential years.

Immediately after the war, many white southerners blamed Davis. As the federal government occupied the South during Reconstruction, southern white opinions changed and many embraced the idea of a grand "Lost Cause" to preserve the antebellum South against the kinds of changes that occurred after slavery ended.

Northerners also moderated their opinion of Davis and the Confederacy and many abandoned the cause of freedom and full citizenship for African Americans. Believing that a spirit of reconciliation might alleviate conditions for all, Gerrit Smith, who had supported John Brown's abolitionist raid, made a symbolic gesture by posting a share of the bail needed to free Jefferson Davis from his prison sentence.

In recent years, historians such as Karen Cox and David Blight have demonstrated the connection between the erection of Confederate monuments and a desire to replace the history of the war and its central cause with the impression that the South was fighting a noble battle against the forces of modernization and the power of the central government. Both the United Daughters of the Confederacy and the Sons of Confederate Veterans worked to erase or distort the connection between slavery and secession. For example, the UDC devoted considerable resources to convincing schools to bar any textbook that taught about the political conflict over the extension of slavery. UDC approved textbooks echoed UDC curriculum and required Southern white and even some black children to echo this through scripted call-and-response. When a UDC member asked the question "How were the slaves treated," for example, children were required to answer “with great kindness and care in nearly all cases, a cruel master being rare.”