The Comanche National Museum and Cultural Center (CNMCC) holds exhibits on the history, religion, language, and culture of the Comanche people, as well as the world's most comprehensive collection of Comanche artwork. Features include an interactive exhibit on buffalo hunting, a fully painted 16-foot teepee, and an exhibit on the Comanche Code Talkers who served in the Second World War. 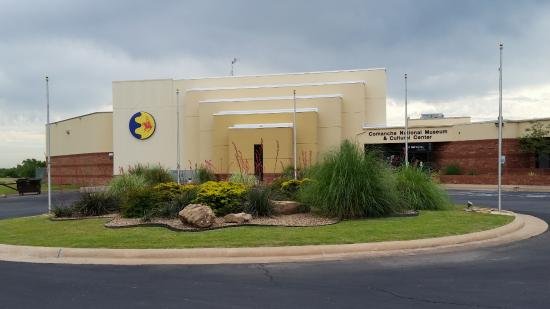 An exhibit in the CNMCC (image from ABC News) 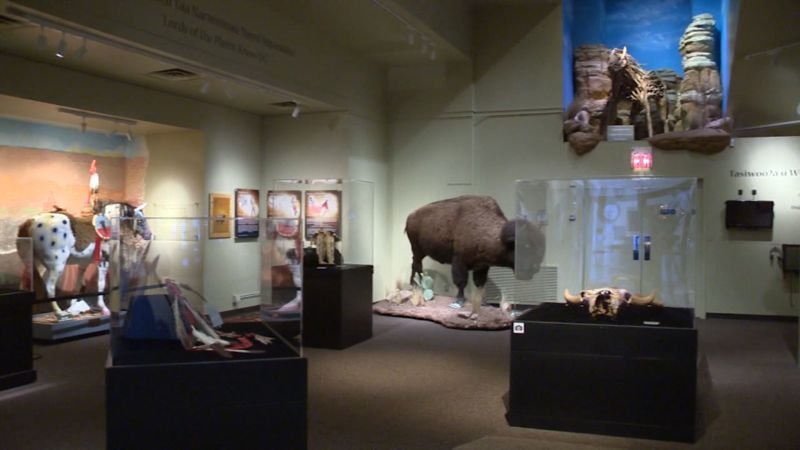 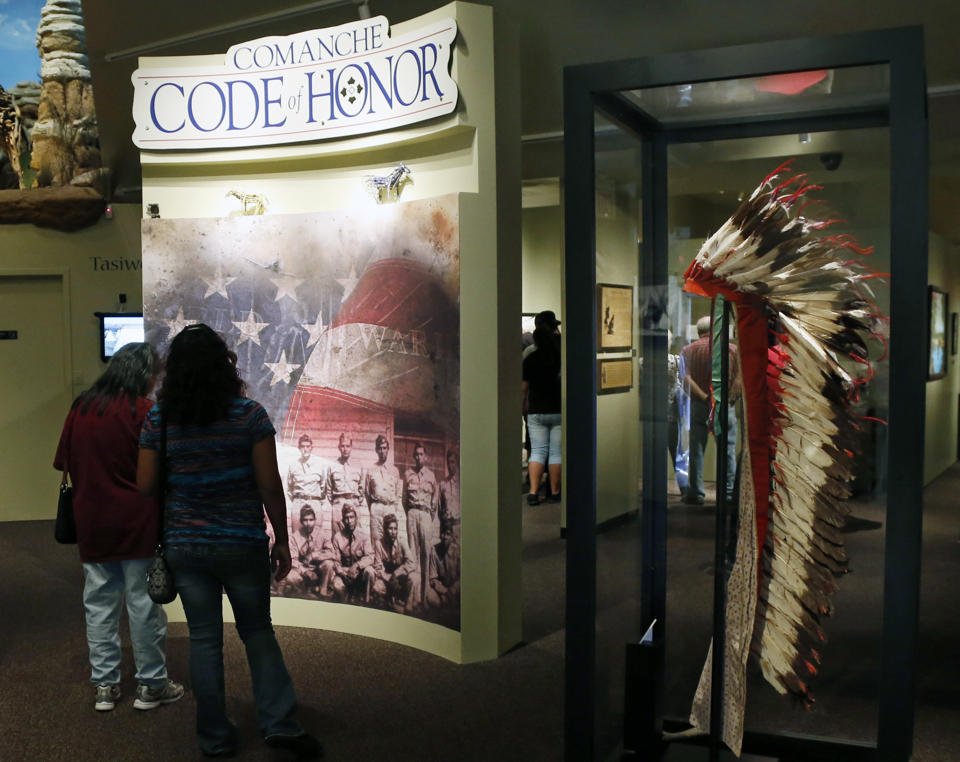 Part of the art galleries at the CNMCC (image from Yelp) 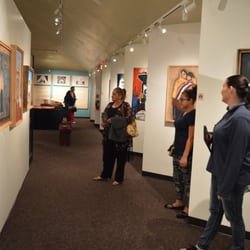 A Brief History of the Comanche
Once part of the Shoshone Tribe, the Comanche (or Nʉmʉnʉʉ, The People, in their own language) migrated to the Southwest from the northern plains in the late seventeenth and early eighteenth centuries. According to oral histories, the Nʉmʉnʉʉ split away from the Shoshone in order to settle a dispute within the tribe, but the choice to move south into Texas, New Mexico, and Oklahoma also gained the Comanche access to trade with the Spanish [3]. Horses became a vital part of Comanche culture, providing increased mobility, a significant advantage in warfare and buffalo hunting, and an economic resource in horse breeding and trade [2; 3]. As nomadic horsemen, bands of Comanche bound by kinship and social ties relied heavily on buffalo for food, shelter in the form of teepee coverings, clothing, and trade [2]. "Bands," or nomadic villages, were composed of groups of extended families who traveled regularly together; the core family's head served as the leader (paraivo). Villages with political interests in common formed divisions with a headman elected from amongst the paraivo. Movement within these groups was fluid, even extending to individuals from non-Shoshone ancestry, such as Arapahos, Crows, and Pueblo tribes such as the Hopi, as well as adopted Spaniards, Mexicans, German-Texans, and Anglo-Americans (some of whom were captured). Smoke lodges (informal gatherings) and formal councils were held to discuss community matters such as intertribal trade, peace treaties, communal hunting, and public or political disputes. Private matters under Comanche law included marriage arrangements, divorce, damages for adultery, and murder; only if these could not be settled privately would the chief step in. Religion, too, was practiced privately or within small groups, and focused on the attainment of personal power (puha) from the spirit world. Herbal healing was an important component of traditional Comanche religion, as were war-foretelling and protection ceremonies. Peyote became part of the foretelling ceremony in the early nineteenth century, later influenced by the Apache peyote ritual toward the end of the century [3].

In the nineteenth century, the Comanche came into conflict with the Southern Arapaho, the Cheyenne, and the United States Army. In spite of treaties with the U.S. Government, the Penateka Comanche of Texas were forced from their reservation in 1858, and in 1867, the Comanche signed the Treaty of Medicine Lodge Creek, agreeing to live on a smaller reservation in west Oklahoma, along with the Kiowa and Apache. The confederation of these three tribes was known as the KCA, which formed a joint business committee. Fort Sill and Anadarko were the reservation centers, with Quakers assigned as its agents, later joined by Catholic, Episcopal, Baptist, and Mennonite missionaries. In the 1890s, Comanche people began serving as preachers and deacons, and European hymns were translated and adapted into Comanche musical forms. Like other American Indian children, large numbers of Comanche children were sent to boarding schools away from home, at the Hampton Institute in Virginia and the Carlisle Indian Industrial School in Pennsylvania, though many attended Fort Sill Indian School or Riverside. In an attempt to force the Comanche to become farmers, the U.S. Government split the reservation into individual allotments of 160 acres each in the first decade of the twentieth century; any "surplus" land was re-opened for settlement by non-Native Americans. With some success as horse and cattle ranchers, the Comanche people received an economic boost in the 1930s through oil and natural gas leases [3].

During the First World War, the Nʉmʉnʉʉ language was used as a code to coordinate a battle; in World War II, twenty-one Comanche servicemen were selected for the Code Talker program. A code was organized based on words from the Comanche language to prevent enemy intelligence from learning Allied plans. The Comanche Nʉmʉrekwa’etʉʉ, or Code Talkers, were able to relay and decode secret messages roughly eighty times faster than previous divisions, and their codes were never broken. Of the twenty-one Comanche Code Talkers selected, fourteen fought in Europe, and thirteen fought at the beaches of Normandy on D-Day. All survived the war [1].

In the 1960s, the Comanche officially declared themselves an individual nation, voting in a tribal constitution in 1966 [3]. The Tribal Council governs the Comanche Nation today, with around 17,000 members as of 2017. Its mission is to improve the well-being and economy of the Nation while preserving the heritage and natural resources of the tribe [2].