The Hotel Putnam has had a long and tumultuous history. Now abandoned, and for sale for the fifth time, it lives on primarily through the ghost stories DeLand's residents tell, and to which they ascribe the continued failure to renovate and rejuvenate the deteriorating cultural landmark.

The current appearance of the Putnam Hotel. Most of its windows and doors are boarded up and padlocked, but many of Deland's homeless population have at points taken up residence in the hotel's remains. 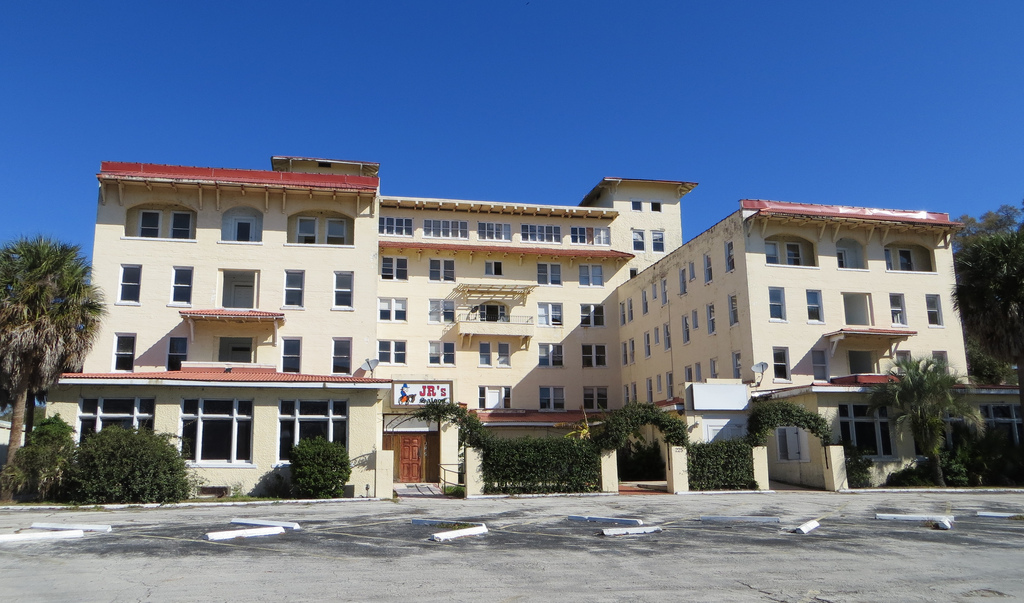 What was once the lobby of the hotel, which you first encounter upon walking into the door to the left of the courtyard. 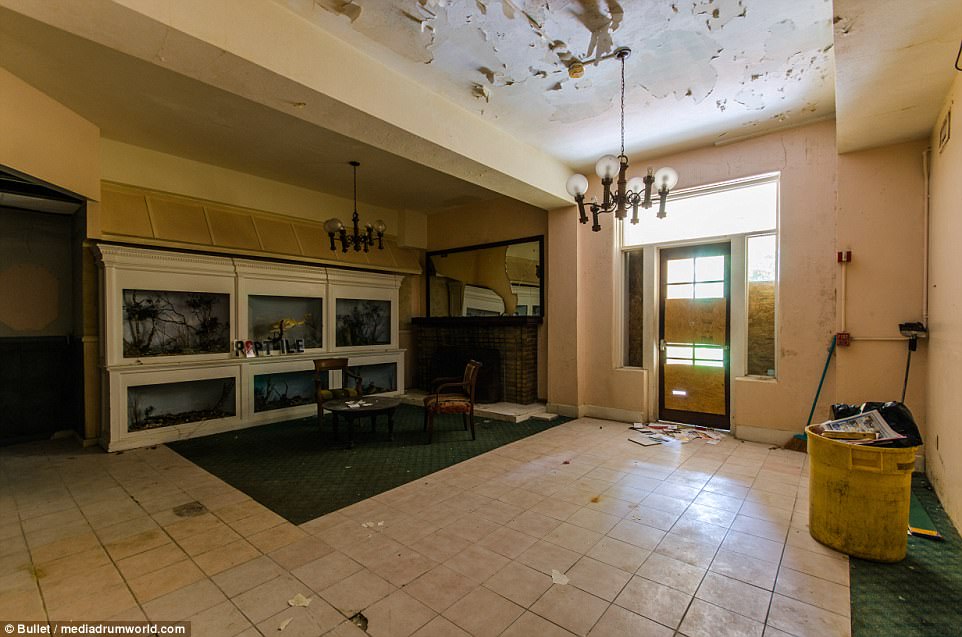 A photo from about 2009, before the eviction process and business closure had begun, around the time Jayne Rocco acquired the property. 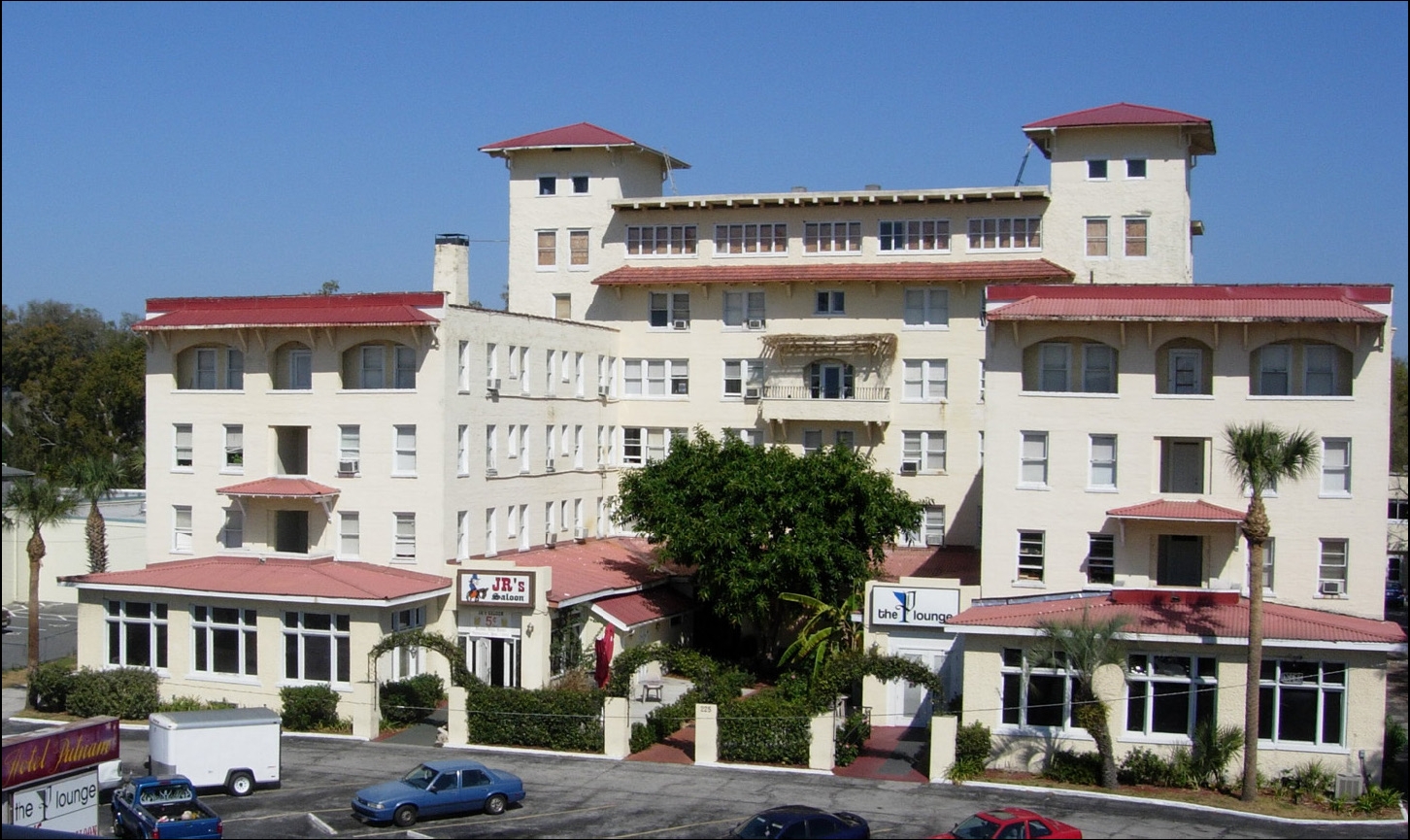 An artist's depiction of the hotel on a postcard from around 1923--the text at the bottom reads "New Hotel Putnam, Deland, Fla. Modern, Fireproof. One Hundred and Fifty Rooms of Comfort." 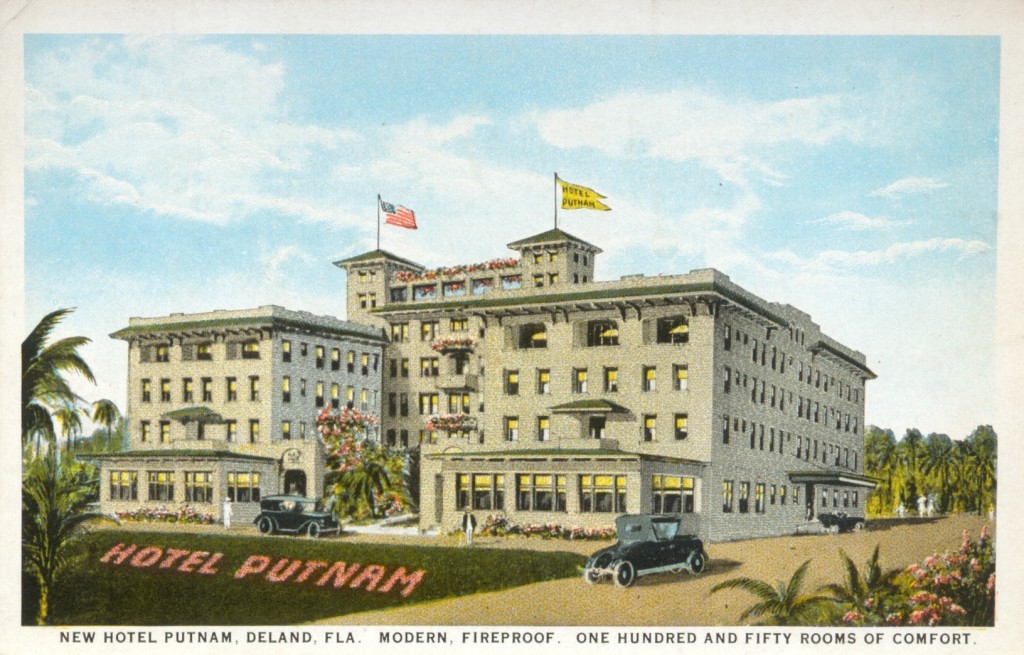 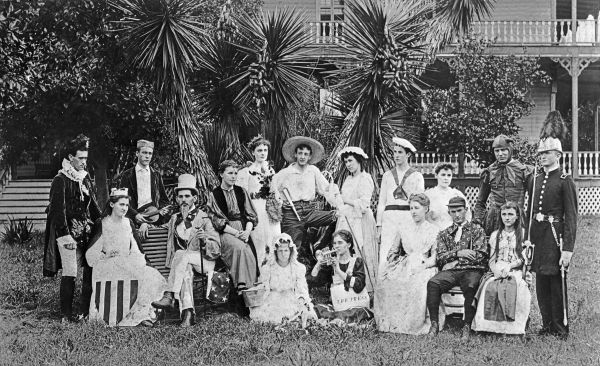 “It’s the ghosts.” At least, that is what longtime DeLand residents attribute the storied Putnam Hotel’s unfortunate recent history to. Originally a luxury hotel for snowbirds escaping chilly Northern winters, the Putnam in recent decades has taken on a decidedly less than glamourous appearance and reputation. Restoration efforts have been stalled time and time again, with each hopeful and optimistic owner eventually attempting to rid themselves of the property upon the realization that the cost of renovation is far more than expected.

Originally owned by Henry A. DeLand, the property was passed to a Mr. Putnam sometime between 1880 and 1921, when the original structure burned down. In 1923, the new and improved Hotel Putnam, built by architect William J. Carpenter as the first fireproof building, opened. Used as a high-class hotel, a place for Stetson student banquets, and a home for various local businesses the Hotel Putnam occupied a large place in the social and cultural landscape of the early and mid-twentieth century DeLand.

The legends of hauntings may stem in part from a 1984 murder that occurred in the Putnam. Stephen Hughes pushed his pregnant girlfriend Elmyra Winfield from a fire escape killing both Winfield and her unborn child. Per the Orlando Sentinel, "according to the coroner's report, Winfield was pushed off a third-floor fire escape in the Hotel Putnam, a run-down building in downtown DeLand." The use of language here already indicates the state of the building, which continued to worsen into the twenty-first century, still being used by students, businesses, and tenants alike. Into the mid-2000s, the bars in the hotel, JR's and Karma, were hotspots for students and young adults, especially because they served alcohol to minors. Despite this, Stetson alumni note that you were better off going with friends, because the chance of being mugged was pretty high. There is an interesting shift here, between the mid-twentieth century and the beginning of the twenty-first, from splendor and opulence to a flagrant disregard of the law in order to maintain an audience and income.

In 2011, the longtime owner of the Putnam began evicting residents, the businesses within closed, and no preventative or reparative measures were undertaken. Prior to the official close, the Putnam offered a variety of ghost tours, which attracted locals and tourists alike. There have been alleged ghost sightings, with numerous posters on Abandoned Florida and Haunted Places discussing their paranormal (and not) experiences. But are these ghosts and their stories presenting a roadblock to preserving this integral West Volusia landmark? Ghost stories are often gimmicky and you run the risk of a historic site being taken less seriously by using them as promotional material—however, that considered, the Putnam (and sites nationwide) has profited off the ghost tours held within it. Perhaps part of its path back to being reputable is taking further advantage of these stories, and tweaking and historicizing them to better suit the site's genuine past.

The Hotel Putnam has lost its voice and the stories within are being lost. Its location off the beaten path of the current heart of DeLand may also be contributing to the perceived lack of importance, which compounds with the repeated failures to deal with the property. As recently as mid-2017 a Florida-based developer had received a grant from the city of DeLand, as well as other financial incentives, to bring the Hotel back to its former grandeur but nothing has come of it. The building is now listed as "permanently closed" by Google, has its windows boarded and doors padlocked, and until the next investor sees potential will probably continue to deteriorate, as at this point it is more expensive to demolish than to just leave the building be.