The Kentucky Native American Heritage Museum was founded in 1999 to promote understanding of North America's Indigenous People from both historic and contemporary perspectives. Through collection and dissemination of information about their histories, cultures, beliefs, and expressive arts; their existing communities, lifestyles, occupations and ways; and their past and ongoing contributions to Appalachia's and our nation's cultural weave, continue to educate those around them. The museum includes an award-winning mobile museum. 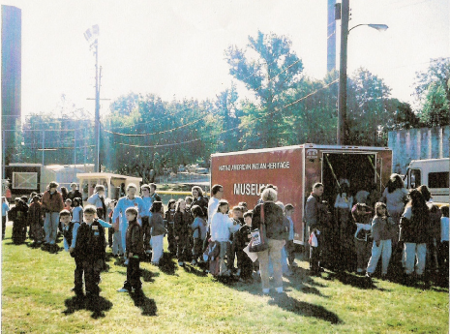 Richard Blue Cloud Kidd, a shawnee and native of Kentucky, teaches children how to make arrows, showing them the differences between Cherokee and Shawnee arrows in the process. Originally featured in August 2010 Kentucky Living Magazine. Creations by 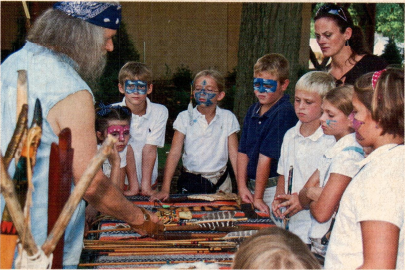 It has particular interest in providing venues for and otherwise supporting the work and lifestyles of those who preserve tribal traditions in their homes and communities through educational and social activities, creative expressions and proactive honoring of diversity in schools, museums, libraries, festivals and other public and private outlets.

The museum brings native people and the general public into closer contact with each other, promoting mutual awareness and appreciation. The museum also teaches children and adults about the Eastern Woodland Tribes which inhabited this region when Europeans first came and had significant effect on everything from choice of self-government to food-ways and survival skills; whose descendants (estimated to include up to 90% of all Appalachians) still play the primary role in shaping the mountain character.

Some estimates put the percentage of people in Appalachia with Native blood as high as 92 percent. The Cherokee Trail of Tears went through the southern half of Kentucky, during which many ancestors slipped away and lived as white people while hiding their ancestry due to fear of being removed to the reservation.

Kentucky observes Native American Heritage Month in November—but several events, including powwows, have unfolded beforehand in celebration of the contributions Native Americans have made to the state’s cultural heritage. The events, which combine education and hands-on activities like tomahawk throwing, bow-and-arrow and blow-gun shooting, and Indian dancing and drumming, help raise awareness and play an important role in preserving Kentucky’s Native American traditions.

Call for more information regarding visitation and educational opportunities