Built in 1883, the Saline County Courthouse is the central governmental hub and the county seat of Saline County, Missouri. This historic building is one of the best examples of classical architecture in Missouri and towers over the surrounding structures at more than 110 feet. Besides being the home of government, the Courthouse has a destructive past with implications in the American Civil War. 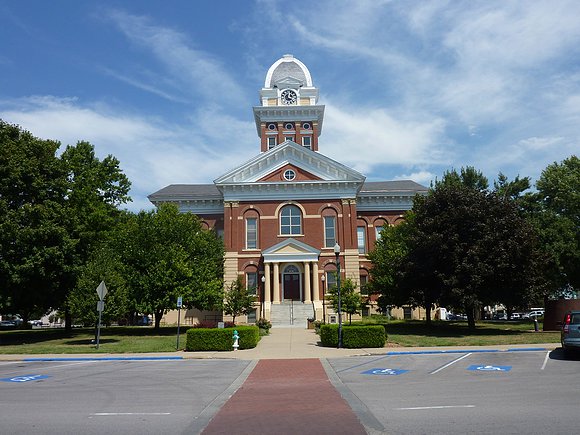 About 40 years after Jeremiah O’Dell donated land to the State of Missouri for the creation of Marshall’s township, the Saline County Court inquired architects from across the country to submit their drafts for a courthouse that would sit in the center of the town. The court received twelve submissions and settled on a proposal by a one J.C Cochran. Previous work of Cochran inspired the style of construction. The two-story structure was constructed primarily of red brick with a limestone base. The building divided into wings corresponding to the four cardinal directions and summits with a functioning clock tower.

The courthouse would stand without major incident until the American Civil War ravished the countryside of Saline County. In the Fall of 1863 Confederate colonel, Joseph O. Shelby began the Shelby Raids, a series of conflicts across the Trans-Mississippi West that would cost millions of dollars in damage to the Union Army and countless deaths. These conflicts plagued Missouri to the point that the American government ordered Brigadier general Egbert B. Brown to put an end to Shelby’s destruction. With over 1,800 troops Brown succeeded in pushing Shelby back into Arkansas in what has become to be known as the Battle of Marshall. Throughout the battle and other operations in Saline County, the Union soldiers would use the basement of the courthouse as barracks. Of course, this led to Confederate retaliation on the building. In August of 1964, Colonel W. S. Jackson ordered the burning of the courthouse. All people and documents were removed before the blaze. The courthouse was rebuilt in 1881 at a cost to the county of some $51,000.

Today, the courthouse is the center of the majority of governmental activities in Saline County. The first and second floors house the county treasurer, clerk, auditor, courtroom and affiliated judicial offices. The basement is home to the Saline County Prosecutor's office and the numerous county commissioners. The surrounding lawn is dotted with memorial structures commemorating the veterans of American Civil War and other conflicts in U.S. history. The courthouse and surrounding yard is the site for many town and county events. The most prominent are the Marshall Homecoming parade, Saline County BBQ, and Saline County Queen Ceremony. In the summer months, the Marshall Municipal Band plays an assortment of musical pieces every Thursday on the courthouse lawn. The MMB was established in 1921, making it one of the oldest continuous running municipal bands in the country. The Courthouse is only blocks away from numerous Marshall attractions, the most notable being the burial site of the most famous Marshall citizen, Jim the Wonder Dog.

Saline County Courthouse was added to the National Register of Historic Places in 1977, but this did not stop the city of Marshall from making considerable renovations to the existing structure in recent years. Starting in 2009, Saline County commissioners proposed improvements that would enhance the structural and aesthetic factors of the building. The remodeling was completed in 2012.