The Joplin Union Depot is a railroad depot in the city of Joplin, Missouri. Its construction was started in 1910 and was completed in 1911. The depot operated through the Great Depression and both World Wars, until its closing in 1969. The depot was of notable architectural significance in that the construction used wastes from local mining operations for the ingredients of its concrete. The depot became a Nationally registered Historic Place in March of 1973. Many attempts have been made to renovate the now vacant depot into a museum. The first was rejected by the Joplin City Council in 1972. In 2010 another attempt to renovate the depot was proposed, but the May of 2011 tornado forced the city to redirect the intended finances and the project has been suspended since.

Current Kansas City Bottoms (after excavation, was once a hilly, wooded area) 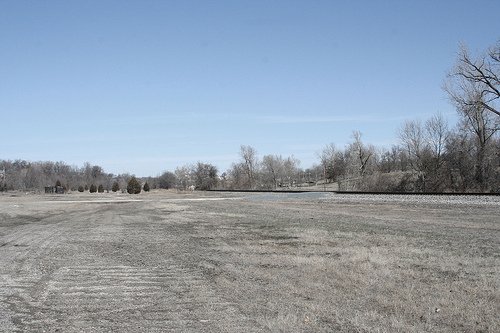 The turn of the Century in the United States called for the expansion of infrastructure to accommodate a growing economy in cities across the nation. Joplin, Missouri was no exception. The need to establish a rail transportation hub in the city was apparent, and the citizens and railroad company were both eager to get work underway.
In October of 1908, a heated debate among multiple parties took place as to determine the language of the Joplin Union Depot franchise. The Missouri and North Arkansas railroad (company planning to fund construction and own the depot), the Joplin city council, and the Joplin Commercial Club (group of top local businessmen) were keen on setting the franchise terms. The Joplin city council wanted the depot to not only serve Missouri and North Arkansas railroad, but any other railroad company so long as the depot facility could quarter them (Commercial Club's main point of contention). In addition, the Joplin City Council wanted the Missouri and North Arkansas railroad to help fund the construction of viaducts to enable travel to the depot. Though the Commercial Club tried to influence the city council in their decision making, they were ultimately unsuccessful. After a few weeks of deliberation, compromise between the railroad company, and the city council was reached. The depot was to be opened to other railroad companies, such as the Kansas City Southern railroad, who in return would help fund the building of the viaducts (in the case of Kansas City Southern, the Third Street Viaduct). On the 26th of October, the franchise was affirmed by the Mayor of Joplin after an almost unanimous vote in favor by the City Council.
The construction did not begin immediately, as funds needed to be raised, land need to be graded, and architectural plans needed to be drawn. “$750,000 OF UNION DEPOT BONDS ARE SOLD” was a Joplin Daily Globe headline on the 12th of February, 1909. The grading of the land was estimated to cost $50,000, and require a minimum of eight months to accomplish. It was not until March of 1910 that residents of Joplin would see an image of the future Union Depot, designed by Canadian architect Louis Curtiss. It was printed as a header on the front page of the News Herald. Construction would be of concrete. The site for construction was the Kansas City Bottoms, a hilly area with a creek and hollows. In April, grading for the land was contracted to Jennings & Jenkins firm of Joplin. The work was to take two months to complete. Three days into the excavation, bones were found three feet under the soil. The Joplin Police could not determine whether they were human remains or not. A few workers left the excavation, not wanting to potentially disturb human remains, though the project continued as planned.
While the grading of the depot site was underway, bidding for the depot construction contract was open. Nine bids were received, but all were too high. On April 8th a proposition was made to revise the design of the depot and reopened the bidding. The changes to the building materials were made and on the 18th bidding was reopened. Manhattan Construction Company won the contract on June 5th for $60,000. Construction begun on July 25th, one day after the completion of the main grading operation. Flint and limestone from local mining operation waste was used in the concrete mixture for the depots construction. These ingredients were often used for sidewalk other small projects, but it was a first for a such a large building. The construction was completed in late June of 1911.
On July 1st, 1911 the Joplin Union Depot was opened  and the first commercial train, from the Missouri, Kansas and Texas railroad entered the depot with over 2,500 spectators. The depot saw use through the Great Depression and both World Wars until November 4th, 1969. In 1972 an attempt to renovate the depot into a museum was rejected by the City Council. In 2010 similar plans to renovate the depot into a museum were proposed and were under consideration but were overshadowed by the 2011 Tornado that destroyed a significant portion of Joplin. The depot remains vacant until plans to renovate it are once again brought to the table.