Camp Bonneville is an old U.S. Military Reservation Site that was closed in 1995. It was in established in 1910 and was in use for all of those 85 years (1910-1995). It is located on the border of Brush Prairie, Washington and Vancouver, Washington.The Department of Defense (DOD) owned and operated this site for firing range practices and other training.

One of the gate entrances to Camp Bonneville. 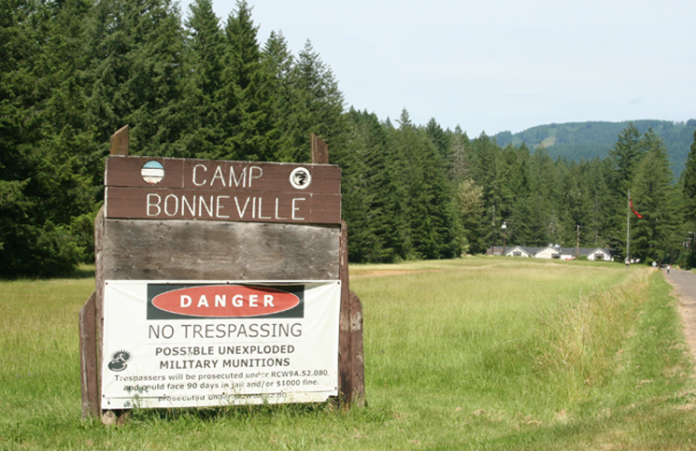 Camp Bonneville is an old military training site that has been merely forgotten. Camp Bonneville is 3,480 acres in size and is located on the most southwest point of the state of Washington. It's location hugs the town borders of Brush Prairie and Vancouver, Washington. The camp was recommended for closure in 1995 by the BRAC(Base Realignment and Closure) report and was closed later that year. The camp is named after Lieutenant Colonel Benjamin L.E. Bonneville.Lieutenant Colonel Bonneville was born in Paris in 1796. He came to America in 1803 with his mother and two brothers. He graduated from the West Point Academy in 1820. He participated in the Mexican-American War in 1845 and the Civil War. With all his experience as an officer in the U.S. Army, Lieutenant Bonneville is still mostly known for his explorations through the northwest states when he drew up one of the first published maps of the interior West.
When the camp first started to operate, it was used as a drill field and a rifle range. This was one of the the armies training sites during World War 1. Within the site, there are 25 ranges for various weapons and two cantonments to house the troops at the camp. During World War 2, Camp Bonneville was used as a Italian POW camp. In 1959, Fort Lewis was considered the controlled military base over Camp Bonneville. That was when Fort Lewis became the primary military base for the area and Camp Bonneville was considered a reservation site. All active training units ceased operations at Camp Bonneville in October of 1995 after the BRAC report recommendation of closing the site was accepted.
Today, the property of camp Bonneville is sought after by local hikers and equestrians. The local population would like to see this landmark eventually turn into a public park. The environmentalist company(Western Solutions) and the U.S. army have been working together to cleanup the site of contamination from the ammunition and other hazardous substances that have been left behind from the times when the camp was a live military training site. "On October 3, 2006, after 10 years of dialog and negotiations with the Army and the state Department of Ecology, the Board of Clark County Commissioners accepted a transfer of property ownership from the Army to the county(Clark County)."(Clark.wa.gov). Once the camp is considered a clean and safe area, the property of Camp Bonneville will be controlled by Clark county for public use.