The Raney House Museum is operated by the Apalachicola Area Historical Society. Members of the Raney family lived in the house until 1914. The City of Apalachicola purchased it in 1973 and established the Raney House Museum which exhibits furniture, documents and artifacts of the 19th century. The museum tells the story of Apalachicola, which was nothing more than a small settlement at the mouth of the Apalachicola River until the 1820s. By 1828 steamboats operated between Apalachicola and Columbus, Georgia carrying manufactured goods to upriver towns and plantations and returning with cotton destined for mills in New England and Europe. In 1836, 50,000 bales of cotton were shipped from Apalachicola making it the third largest cotton port of the Gulf coast, after New Orleans and Mobile. The three decades prior to the Civil War were prosperous ones for Apalachicola. Revenues from the cotton trade built several fine mansions, including the Greek-Revival Raney House, completed in 1838 by David Greenway Raney. Raney made his fortune in the cotton trade, and served two terms as mayor. David and Harriet Raney had three sons who served in the Confederate forces. One son, David G. Raney, Jr., was a marine officer aboard the C.S.S. Tennessee which was captured by Union naval forces in the Battle of Mobile Bay in 1864. David was captured but escaped and made his way back to Confederate lines.

Special tour group requests to visit The David Raney House may be arranged at any time. 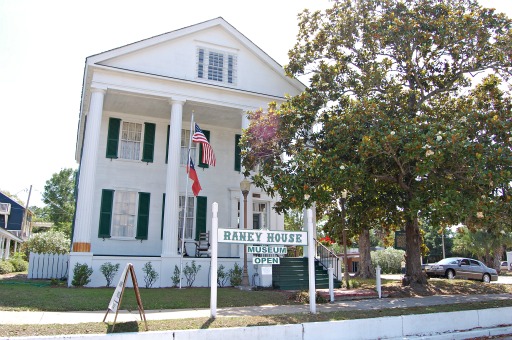