Re-opened to the public in January of 2018, the Citizen Potawatomi Cultural Heritage Center features museum exhibits on the history and traditional lifeways of the Potawatomi, as well as the Potawatomi Nation in Oklahoma today. The Center includes the Mezodan Research Library with archives and research resources. On the grounds also are a community garden, an eagle aviary for rescued raptors, and the historical cabin of Antoine and Mary Anderson Bourbonnais, two of the Nation's founding members. The Center also offers language classes, moccasin and regalia making classes, dance courses, and winter storytelling events, and hosts the Family Reunion Festival and the Gathering of Potawatomi Nations for tribal members and their guests. 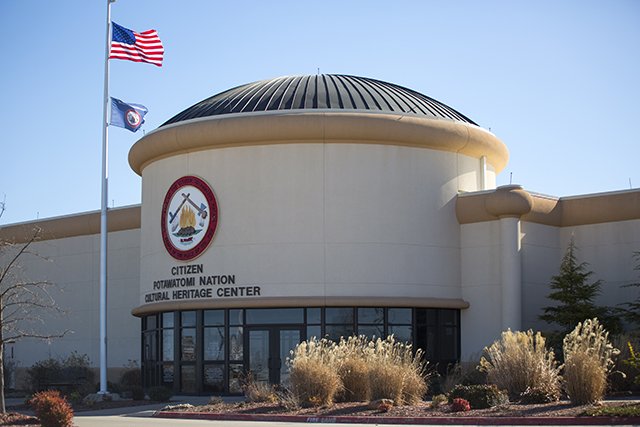 Interior (image from the CPNCHC) 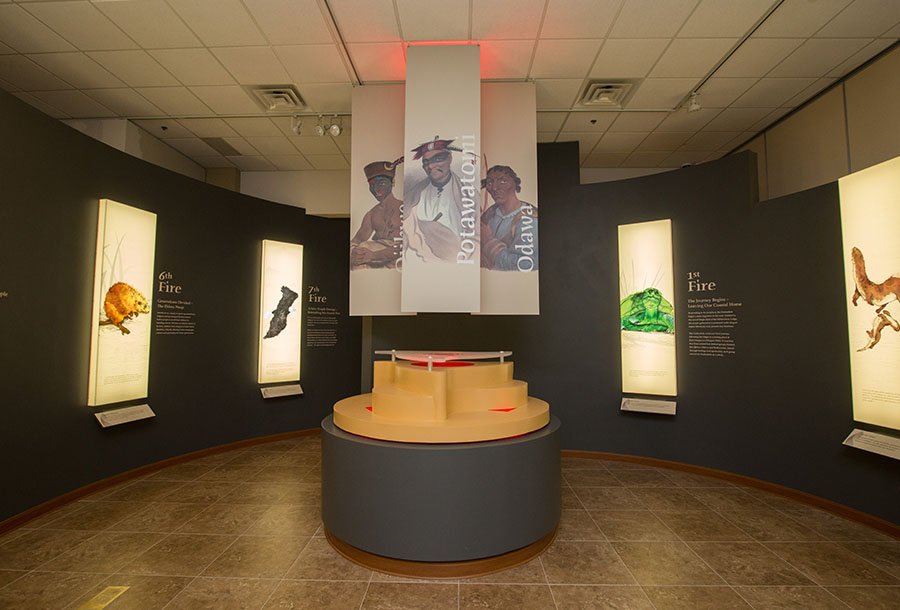 An exhibit in the museum (image from the CPNCHC) 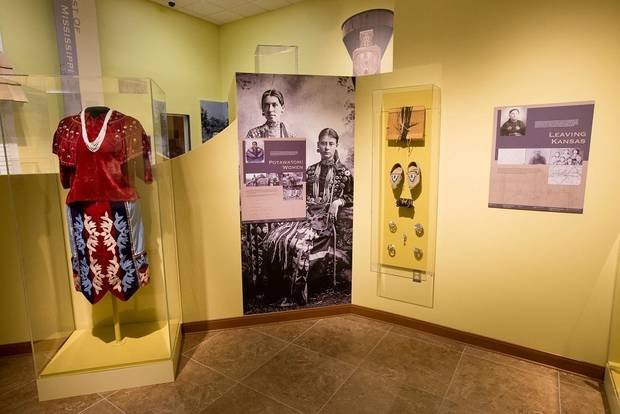 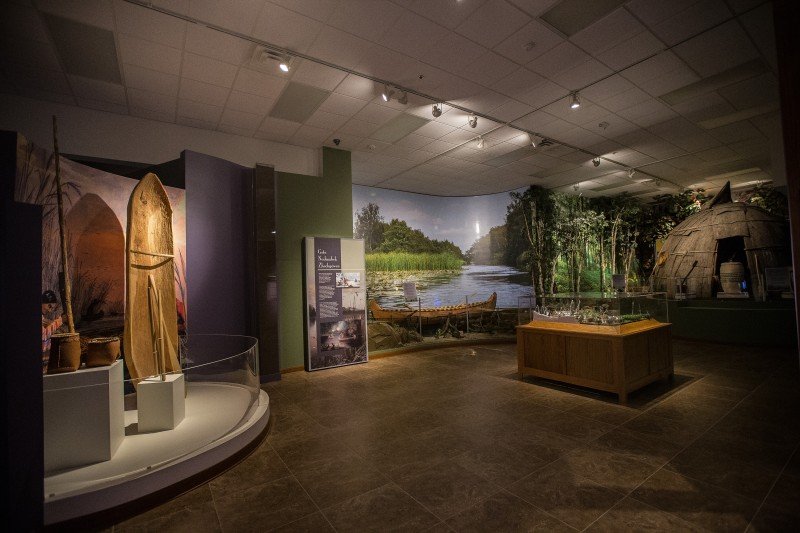 Bourbonnais Cabin on the grounds (image from CPNCHC) 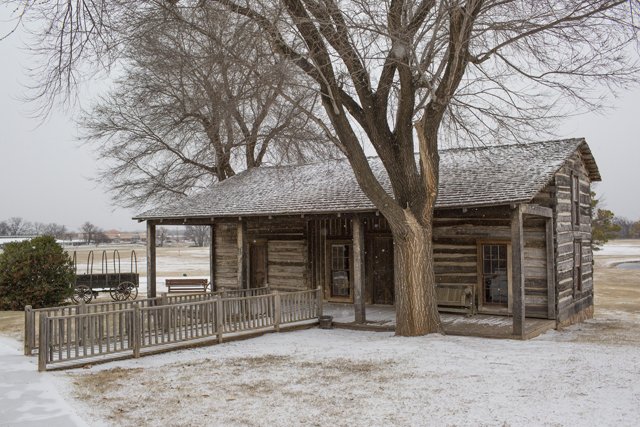 The Aviary (image from Visit Shawnee) 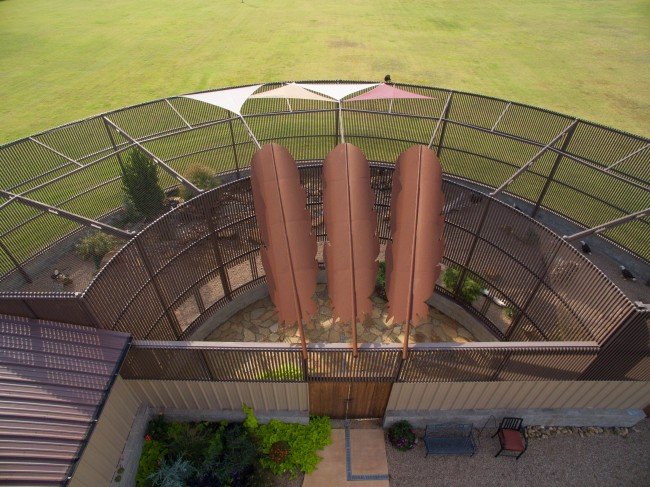 Dancers in traditional regalia at the Grand Opening, January 2018 (image from The Oklahoman) 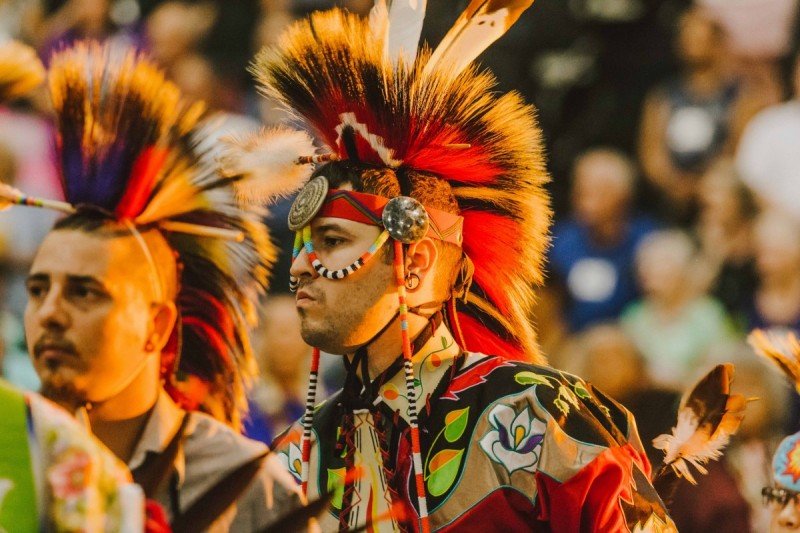 About the Cultural Heritage Center
Opened initially in 2006, the Citizen Potawatomi Cultural Heritage Center was closed in 2014 due to heavy flood damage. Renovations were undertaken and new artwork and exhibits were created by local and Native-American owned businesses, and the center re-opened in January 2018. Some of the highlights include a full-size replica of a Potawatomi traditional home and handmade canoe, a collection of 86 pairs of moccasins handmade by tribal members, and an astrology exhibit [2]. In addition to its cultural artifact collections, the center also holds the Mezodan Research Library, with archives, literature, mixed media and language resources, and ethnology and ethnohistory materials including maps, genealogical data, traditional and contemporary art and textiles, spiritual and ceremonial items, and ethnobotanical collections  [1].

In addition, the Cultural Heritage Center is home to the Citizen Potawatomi Nation Eagle Aviary, where rescued eagles and other raptors are cared for. As eagles are held sacred in traditional Potawatomi culture, injured birds of prey which cannot survive in the wild are given a permanent home in the Aviary, which also serves to educate people about the birds. Tours are given by special appointment. Another feature on the grounds is the 1881 cabin which was home to one of the first four Potawatomi families to relocate to the Indian Territory, the Bourbonnais. Antoine Bourbannais welcomed the Quaker missionaries who constructed the nearby Friends Mission Church, supplying them with lumber, windows, and a bell; his wife, Mary, served the community as doctor, midwife, record keeper, and superintendent of the Territory's first Sunday school. The grounds also include a community garden [1].

Programming and events at the Cultural Heritage Center include language classes, moccasin and regalia making classes, dance courses, winter storytelling, and two events for tribal members and their guests: the annual Family Reunion Festival, with tribal elections and celebration of cultural traditions, and the Gathering of Potawatomi Nations when it is the Citizen Potawatomis' turn to host it [1].

The Potawatomi came from a group of Algonquin peoples known as the Neshnabek, who lived on the East Coast. The Neshnabek, who later split into the Potawatomi, Odawa, and Ojibwe tribes, had a tradition which spoke of seven eras, each of which would change the peoples' lives forever. Based upon the first part of the Seven Fire Prophecy, the Neshnabek migrated inland. At Niagara Falls, the group split into three tribes which remained culturally and spiritually united. The Bodewadmi or Potawatomi (meaning Keepers of the Fire) continued inland to settle around Lake Michigan sometime before 1500 A.D. [1; 3]. Traditional Potawatomi villages held a strong sense of community, and were run by village-approved councils and headmen who led by consensus. Kinship and clan systems were important to the structure of these communities, and living in tune with the environment was both practically and spiritually central to the lives of the Potawatomi. In this tradition, each of the four seasons has its own celebration ceremonies, songs, dances, stories, and activities, and the seasonal cycle principle is also applied to medicine, life cycle, and directional powers. Spring was important for planting crops, as well as harvesting syrup from the sap of maples (stands of which were passed down from a mother to her children). Summer was, of course, a time for gathering berries and tending the crops, but also for games, dancing, celebrations, and games including stickball and dice. During the fall harvest, the Potawatomi camped near their wild rice fields, while hunting game and gathering nuts and vegetables from the village orchards. In winter, the Potawatomi moved to their winter camps, ice-fishing and trapping small game, storytelling, and playing a sport known as Snowsnake on icy tracks outdoors [1].

The French were the first Europeans, in 1634, to contact the Potawatomi. Though successful as middlemen in the fur trade with the French, conflicts known as The Beaver Wars fought between the Algonquin and Iroquois tribal groups over control of land and resources led the Potawatomi to migrate into the areas now known as Wisconsin, Michigan, Indiana, Illinois, and Ohio. Conflict also arose within the Potawatomi community as European settlement reduced the mobility and flexibility of traditional Potawatomi life and socio-political structures. The fur trade led the tribe into a series of conflicts over the next century and a half: the Beaver Wars, the Fox Wars, the French and Indian War against the British, and Pontiac's War, during which a confederacy of Native American tribes tried to drive the British out of their territories. During the American Revolution, some Potawatomi remained neutral, some continued to fight Britain, and some fought the Americans. Following the war, Britain unlawfully ceded land belonging to Native peoples to the U.S., leading to yet another series of battles known as the Northwest Indian Wars. During the War of 1812, the Shawnee Tecumseh led a confederacy of Great Lakes tribes including the Potawatomi allied with the British against the United States to try to recover their lands. When the war ended in a stalemate between the British and the U.S., the British abandoned their Great Lakes allies [1; 3]. It was "a major turning point in the Indian Wars, marking the last time that Native Americans would turn to a foreign power for assistance against the United States," [3]. The U.S. government's policies toward American Indians became increasingly hostile after the war. Despite the 44 treaties between the Potawatomi and the U.S. government, like many other tribes, the Potawatomi were forcibly removed from their homeland after President Andrew Jackson signed the Indian Removal Act in 1830. The 859 Potawatomi living in northern Indiana were subjected to a forced 660-mile march beginning on September 4, 1838, heading for a reserve in Kansas. Their village was burned behind them. Forty died on the journey, known as the Trail of Death, and of the remaining group plus the Woods and Prairie Bands who joined them later, 600 more died of diseases at the St. Mary's Sugar Creek Mission in Kansas over the next decade. In 1861, 1,400 of the Potawatomi on the eleven-square-mile Kansas reservation acquired U.S. citizenship and became known as the Citizen Potawatomi, moving to an almost 600,000 acre reservation in Indian Territory (now Oklahoma) by the 1870s [1; 3]. However, any part of the reservation not privately owned as per the Dawes Act of 1887 was later given away to white settlers during the Land Runs of 1891, 1889, and 1895 [1].

The Citizen Potawatomi Nation ratified a new constitution on August 16, 2007, restructuring its government and prohibiting interference from the U.S. Bureau of Indian Affairs [1].