Oklahoma became a state in 1907, having previously been the Indian and Oklahoma Territories and the site of forced resettlement of American Indians from the 1830s on. In 1910, the capital was moved from Guthrie to Oklahoma City, and the new State Capitol Building was completed in 1907. Today, it houses a large art collection and sits directly atop an oil well [1; 2; 3; 4; 5]. 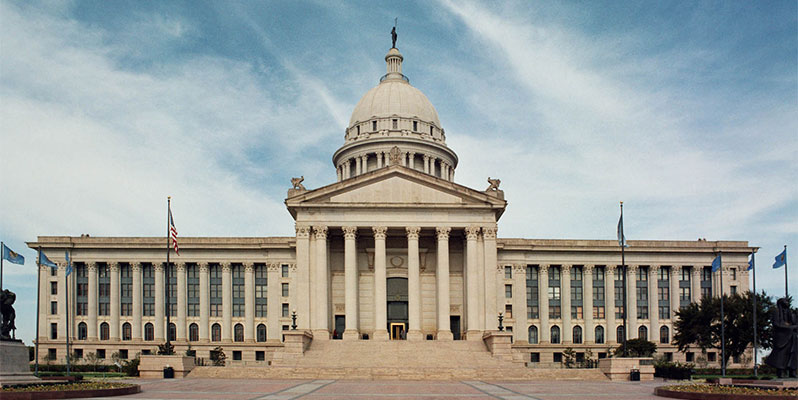 Groundbreaking of the Capitol, 1914 (image from Oklahoma Historical Society) 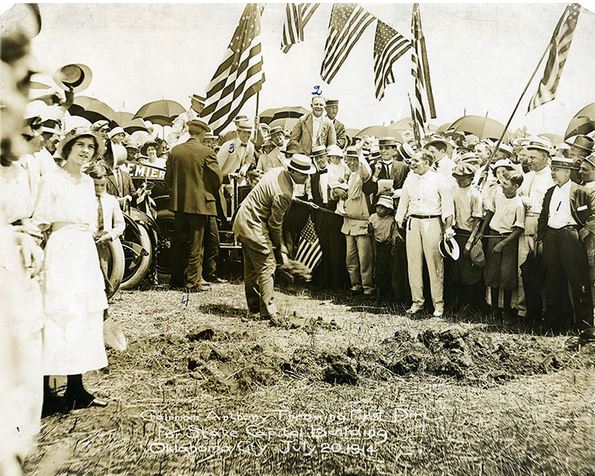 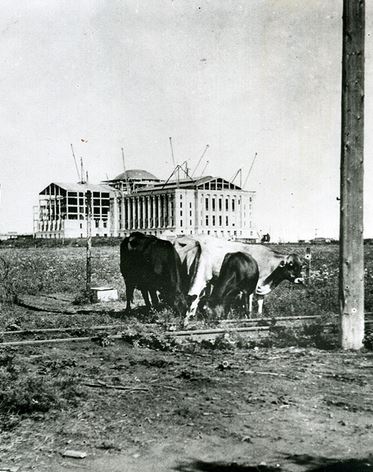 Oklahoma, gained by the United States through the Louisiana Purchase in 1803, became the resettlement site for more than thirty American Indian tribes when the Indian Removal Act of 1830 was passed. Tribes whose native lands were in the southeastern U.S. were forcibly removed from their homes, resulting in the arduous journey known as the "Trail of Tears". Gradually, Texas ranchers also moved into the Indian Territories in present-day Oklahoma, and homesteaders were allowed to settle there. Members of the Cherokee, Seminole, Creek, Choctaw, and Chickasaw Nations requested to form a separate Indian state called Sequoyah in 1905, but in spite of popular support, Congress refused. Instead, in 1907, the Indian and Oklahoma Territories together became the state of Oklahoma (a Choctaw word meaning "Red People"). Initially, the territorial capital, Guthrie, remained the state's capital city. In 1910, voters elected to move the capital to Oklahoma Station, which then became known as Oklahoma City [1; 3; 5].

The capitol building (built 1915-1917) was constructed on land donated by William F. Harn and John J. Culbertson, and designed by the Layton and Smith Architectural Firm of Oklahoma City. Though the six-story Beaux Arts style building was designed to support the weight of a dome, the state decided not to include one due to the cost [4; 5]. The dome present today was constructed in 2001-2002. The building houses the Capitol Art Collection and the State Art Collection, which includes over 100 sculptures, murals, and paintings, one of which is a twenty-two-foot bronze entitled The Guardian by sculptor and state senator Enoch Kelly Haney [2].

Appropriately, given the state's early economic reliance on the oil industry, the capitol is built atop an oil well known as "Petunia Number One". During the 1920s through 1940s, oil drilling pushed further and further into the heart of the city, perhaps in part due to the economic hardships of the Great Depression and the Dust Bowl of the 1930s. When the city council voted against drilling within the grounds of the capitol building, Governor E.W. Marland declared martial law in order to put in twenty-four oil wells, including Petunia Number One, which is angled through a flowerbed to pull oil from directly under the Capitol Building itself [3; 5].